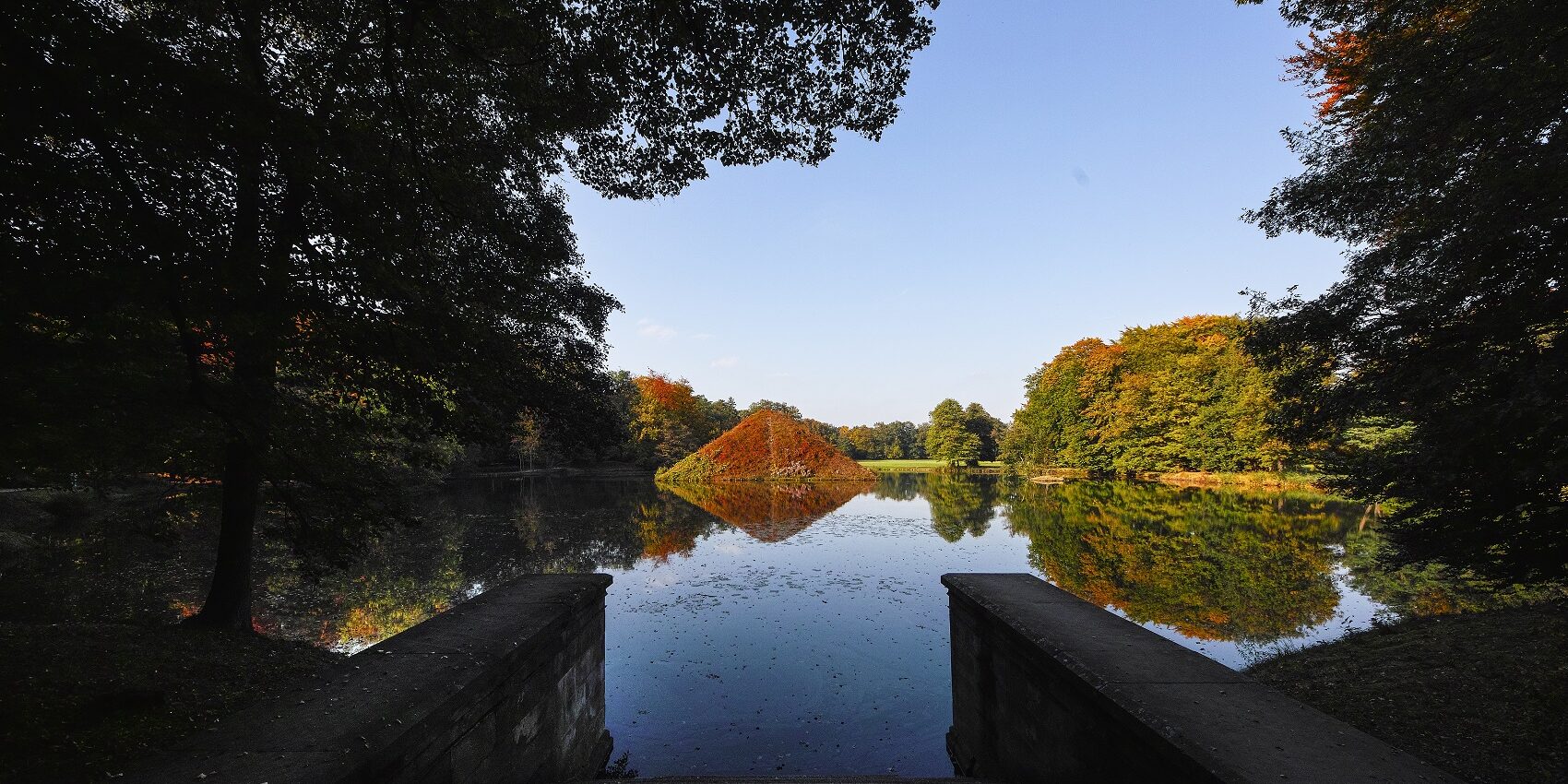 Located near Cottbus, Branitz Park and Palace is the masterpiece and late creation of the eccentric garden designer Hermann Fürst von Pückler-Muskau (1785-1871). Gently curved earth formations, elegantly shaped lakes and stretches of water and perfectly designed compositions of trees reveal Branitz today to be the pinnacle of landscape gardening development, rightly giving it the status of an historical garden of international standing.

From 1846 until his death in 1871, the “green prince” created an English-style park from a flat and harsh agricultural landscape. The focal point of the park is the palace, the immediate surroundings of which are extensively ornamented with a pergola garden, sculptures and flowerbeds.

Gracefully curving paths lead westwards from the palace and pass through the inner park laid out as an idealised natural landscape before reaching the unique pyramid plain. The plain is a remembrance on Pückler’s part of his trip to the Orient lasting several years. It is named after two unique pyramids which the prince had shaped out of earth and planted with greenery. Situated in the middle of an artificial lake and covered with Virginia creeper, the pyramid of earth has also been Prince Pückler’s place of burial since 1871.

Hermann Fürst von Pückler-Muskau made Branitz famous. He was an eccentric bon vivant, a passionate globetrotter, a successful writer and above all an ingenious garden designer. A comprehensive Gesamtkunstwerk originally covering 600 hectares was created by combining the ornamented open fields and agricultural areas of the outer park (today only partly preserved) with the inner park modelled on idealised nature and the elaborately ornamented pleasure ground around Branitz palace.

The inner park is characterised by expansive meadows with solitary trees and groups of trees arranged into scenes which combine with gentle hills, lakes and stretches of water to create picturesque landscapes. The entire topography of the inner park is designed in such a way that the paths often remain concealed. These narrow, gently curving paths invite visitors to stroll across the meadows, where the views change constantly and new landscape scenes emerge time and again.

Pückler used native trees when designing the park and only employed exotic trees and shrubs in the pleasure ground. Beech, oak, lime, robinia and spruce are often planted in groups, thereby creating individual spaces. A few solitary trees such as copper beeches, grey poplars and plane trees mark particularly important places in the park, e.g. the copper beech at the palace, with its wonderful colouring.

The immediate surroundings of the palace are richly ornamented with flowerbeds and sculptures. The pergola garden is located to the fore of the palace’s entrance façade and features a sculpture of Venus Italika enthroned on a pedestal at its centre. This part of the garden is surrounded by a vine-covered pergola, the walls of which are decorated with reliefs by the sculptor Bertel Thorvaldsen, who was revered by Pückler. The lateral boundary of the pergola is formed by the Kavalierhaus (originally used to house staff with horses), today the park restaurant, and the stables, today a venue for special exhibitions.

Further to the east is the forge meadow, designed as a simple rural landscape. It is the location of the park forge, an imposing small building that originally marked the actual main entrance to Branitz park.

To the north of the palace is the Rosenhügel (Rose Hill), the elevated seating area of which offers a beautiful view of the entire ensemble. This garden area is also home to the “Gothic Window” – a piece of natural architecture where a Gothic pointed window arch is formed by hanging branches on either side of the trunk of a lime tree.

In contrast to the small intimate garden areas around the palace entrance, the area to the west is laid out as a large-scale panorama. The view from the palace lake with the sculpture of Venus of Capua stretches far into the inner park along partly diagonal lines of sight. The view and paths to the northwest lead to the rose-covered arbour in blue and gold, which are also the colours of the ornamentation around the palace.

Following the path along some gracefully shaped hills such as the Mondberge (Moon Mountains) and the Heiligenberg (Holy Mountain), visitors arrive at the two unique green pyramids of earth: the land pyramid crowned with an artistic lattice, and the water pyramid “Tumulus”, which produces a spectacular display of red leaf colouring in autumn with its Virginia creeper.

Water is an important element of design in Branitz. The Pyramidensee (Pyramid Lake) is connected to the Schlangensee (Snake Lake) and the Schilfsee (Reed Lake) by canals. The Schilfsee leads over a canal to the Blumensee (Flower Lake), from where it is possible to start a tour of the park in a completely different manner by gondola. The entrance to the horticultural heart of Branitz park, the palace nursery, is also to be found at the Blumensee. The summer café “Goldene Ananas” and the “tree university” are located in one of the historical greenhouses here. In Pückler’s time, hundreds of large trees were brought to Branitz by means of special vehicles for transplanting trees and then cultivated further before being planted. Today, the genetically identical offspring of dominant trees in the park such as the solitary grey poplar on the Heiligenberg are cultivated and nurtured in the “tree university”.

In the north-eastern part of the park the route continues to the estate farmyard. Formerly the centre of agricultural use of the adjacent outer park, the visitor centre housed in the former stable buildings now marks the starting point for a visit to the park and Branitz palace.

Guides:
Park and castle tours as well as gondola and carriage rides upon prior registration at service@pueckler-museum.de

Program for children: Various offers for children, adolescents and school classes as well as a family exhibition “In search of the petrified prince” (with advance notification). For more information visit www.pueckler-museum.de

Dogs: Dogs are to be kept on a leash. Dogs are not allowed in the houses.