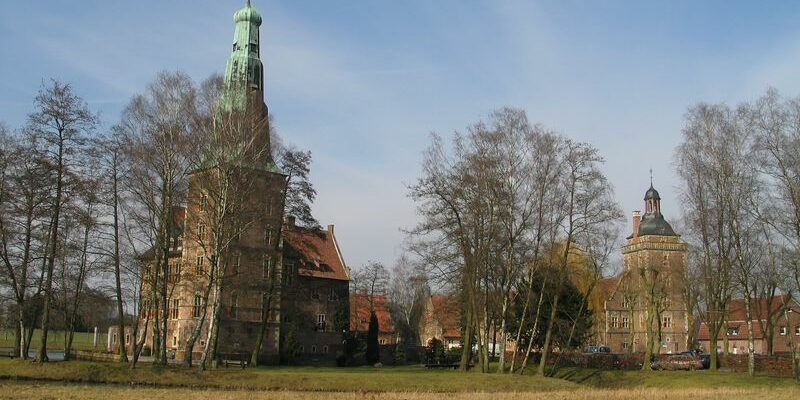 Wasserschloss Raesfeld (Raesfeld Moated Castle) and the extensive woodlands of its deer park are popular for outings among visitors from the Westmünsterland region and beyond.

The Tiergarten was originally created for hunting parties of the nobility and as a “living larder”. Today, it offers visitors the opportunity to go walking in the woods and to observe nature in a calm environment.

The basic structure of the Tiergarten has remained unchanged for the most part since the Renaissance and a new concept has been created to reactivate its earlier roles over the coming  years. The woods have once again been enclosed and the  first animals have been released into the park.

Although historical deer parks are not, strictly speaking, gardens because they tend to be wooded areas, Tiergarten Raesfeld is well structured and features extensive woodland and heathland, meadows, pastures, lakes and springs. This corresponds exactly to the Renaissance ideal of a cultivated landscape as a natural whole. Designed elements such as a vineyard island or the 18th-century “long pool” near the castle harmonise with this mosaic-like landscape.

Extensive deer parks and hunting reserves were created at numerous castles, palaces and houses belonging to the nobility during the Middle Ages and afterwards. Particularly during the Renaissance and Baroque periods, tracts of land were enclosed and long paths and lines of sight created for the “recreational pleasure” of aristocratic hunting parties when they went hunting and coursing. At the same time, these areas of land functioned as “living larders” for the supply of fresh game. Today, the historical deer parks and hunting reserves are often large woods where the visitor is invited to go for a short stroll or a longer walk. There is still often evidence of their erstwhile function, such as long tracks and hunting aisles, which crisscross each other or are shaped like fans or stars. The remains of the boundary structures such as ditches, banks, fences or walls are also often still visible. And alongside these easily recognised elements, one often still finds the remains of other features such as hides, vantage points on hills or purposely created earth formations for flushing out and hunting game. Today, the extensive, carefully planned deer parks and hunting reserves are important historical elements of landscape design.

Count Alexander II. of Velen was responsible for the development of the impressive castle and grounds. He amassed considerable wealth as a military leader in the Catholic Alliance during the Thirty Years’ War, enabling him to develop the old castle of the Raesfeld family into a magnificent residence between 1643 and 1658.

The small houses of the “Freiheit” (the little village near-by) also belonged to the castle.

A detailed plan dating from 1729 gives a good impression of the historical design of the entire complex. Apart from the elaborately-designed gardens, it shows the Tiergarten stretching out towards the west. Covering more than 100 hectares, the Tiergarten encompassed large areas of woodland and heathland as well as meadows, several ponds with mills, streams and springs. The area was surrounded by earthworks approximately 5 km long and 2 m high with a palisade fence running along the top of them. Prince-Bishop Christoph Bernhard von Galen was one of the guests at the hunting events organised at Raesfeld by Alexander II. The unusual aspect of the Tiergarten today is the fact it has remained largely undisturbed and unchanged since the time of its creation. It can therefore truly be considered a relatively well preserved deer park of the late-Renaissance period. This was before the advent of the regular geometrical design of the Baroque period, with its long lines of sight, hunting aisles and avenues. The landscape to the west of Raesfeld castle was, rather, cultivated as a natural and harmonious whole, more in keeping with the ideals of the Renaissance.

A further distinctive feature was the fact that non-native species of game were kept in the Tiergarten during the time of Alexander II. There are reports dating from as early as 1664 of fallow deer, which were at that time unknown in native hunting grounds. These deer originally came from Asia Minor. It is also known that Prince Johann Moritz of Nassau-Siegen, the Brandenburg governor of Kleve, gave the count a gift of a female buffalo in calf for the park. It thus comes as no surprise that Alexander II is still known today as a “special friend of alien animals and beasts”. It is very likely that guests of the castle owner such as the Bishop of Strasbourg or the Elector of Brandenburg had a keen interest in attractions of this kind.

The “long pool” is situated directly to the west of the vineyard lake. It was probably created as a Baroque mirror pool as late as the 18th century. Standing at the end of the pool, visitors to the Tiergarten can still get a view of the castle’s distinctive tower top. The further pools were all supplied with water from the sources of the Mühlenbach stream and the Wellbrockbach stream. The path continues past the forester’s house to the end of the Herrental, where there were once several mills. All that remains of these today is the ruin of the large mill.The historical function of the Tiergarten was revived as part of REGIONALE 2004. This included the restoration of the varied landscape of woods, meadows and heathland, which had gradually disappeared over the years due to afforestation. In addition, the park was again enclosed in traditional manner and restocked with roe and fallow deer in order to help illustrate its historical use more clearly.

A new information and visitor centre at the edge of the park was opened as a correspondence centre for REGIONALE 2004. The centre’s educational work on the environment and cultural history has contributed to the revival of the Tiergarten’s traditional role of keeping wild animals. 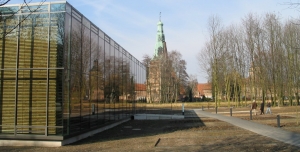 Important notice: Dogs have to be kept on lead.

Map of site and additional information:
Broad range of information available at the information and visitor centre. Information panels within the park (trees, landscape elements etc.)

How to get there

By car: Motorway A3, exit 6 (Wesel) or motorway A31, exit Schermbeck (follow B224 into the direction of Borken)
By train/bus: Train stations in Bocholt and Dorsten-Rhade (use bus 721  from there)