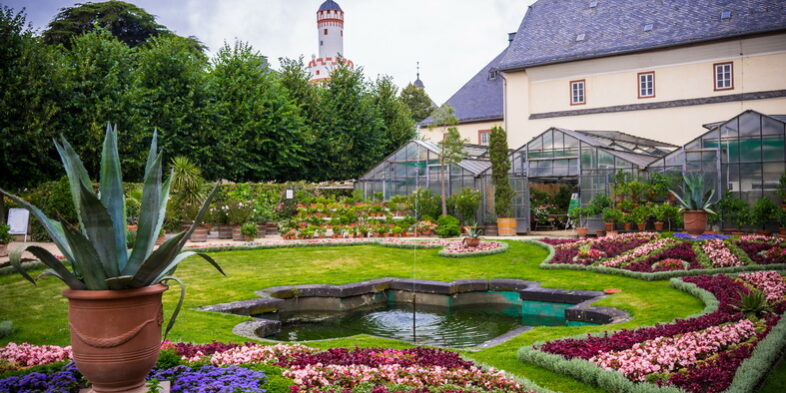 Located in the heart of the Rhine-Main area and with extremely good connections to Frankfurt am Main, Bad Homburg vor der Höhe is known internationally above all as a spa town and for its casino. But the town also has much to offer to anyone interested in garden design. Apart from the 44-hectare spa park designed by Peter Joseph Lenné, it has a very attractive Castle Park which has developed over several centuries. Extending from the Castle Park is the Landgraves’ Garden Landscape, a remarkable work of garden design. Various gardens designed and developed by two generations of landgraves and their wives between 1770 and 1840 were located here along a several-kilometre axis formed by Tannenwaldallee and its continuation, Elisabethenschneise. Of the 14 original gardens, the following can be visited today: Gustavsgarten (Gustav’s Garden), Kleiner Tannenwald (Small Fir Forest), Forstgarten (Forest Garden) and Hirschgarten (Deer Garden). Parts of the pleasure wood “Die Große Tanne” (“Large Fir”) are also open to visitors.

Visitors are presented with a variety of individually designed gardens which have been restored and maintained since the beginning of the 21st century in keeping with measures appropriate for the care of protected gardens.

The Development of the Landgraves’ Garden Landscape

14 individually designed parks and gardens covering more than 250 hectares and located along an almost eight-kilometre axis beginning at Bad Homburg Castle Park and extending well into the Taunus area as far as the Limes: Such was the scene presented by the Landgraves’ Garden Landscape in its heyday during the first half of the 19th century under the landgraves and landgravines of Hesse-Homburg. This was a particular achievement for the small landgraviate of Hesse-Homburg with its limited financial means. No other ensemble of garden design with the same pattern of individually designed gardens located along an axis is known in Germany. Nor is there any known precedent here which served as a model.

Numerous changes and modifications to the Landgraves’ Garden Landscape mean that its historical dimensions are barely perceptible today. It was thanks to extensive research carried out in the 1990s that the Landgraves’ Garden Landscape was actually rediscovered and woken from its “Sleeping Beauty” slumber. While the Landesamt für Denkmalpflege (State Office for Monument Protection) did not record and assess the Garden Landscape in its entirety, it already recognised certain gardens as being worthy of protection as far back as 1988 and therefore designated them as cultural monuments. These were Tannenwaldallee, Gustavsgarten (Gustav’s Garden), Kleiner Tannenwald (Small Fir Forest) and the pleasure wood “Die Große Tanne” (“Large Fir”) along with the Forstgarten (Forest Garden) and Hirschgarten (Deer Garden).

The town of Bad Homburg v. d. Höhe has been working on the restoration of the Garden Landscape since 2000. The fact that most of the gardens are extremely well documented in terms of cartography and illustrations is a major advantage, making it possible to clearly identify and understand the most significant features of the earlier garden design. Unfortunately, the construction of the Hindenburgring – one of Bad Homburg’s main traffic arteries – at the beginning of the 1980s resulted in the interruption of the visual and functional link between the Castle Park and the Garden Landscape. Furthermore, buildings were constructed on three of the original gardens – Englischer Garten, Louisgarten und Ferdinandsgarten – so that these cannot be reconstructed. An orientation and information system which accompanies visitors exploring the Garden Landscape at least makes it possible to remember the no longer existing gardens.

Highlights of the Landgraves’ Garden Landscape

Today, it is above all the following gardens with sophisticated garden design which can be visited: the Castle Park as a starting point for the Landgraves’ Garden Landscape, Gustavsgarten, Kleiner Tannenwald, the pleasure wood “Die Große Tanne”, the Forstgarten and Hirschgarten. All the gardens were created between 1770 and 1840, yet they could not be more distinct in design.

Today’s visitors to Bad Homburg Castle Park experience a series of varied areas from different centuries. Because it was not just the landgraves’ families who designed the park – Prussian kings and German emperors also left traces of their presence here after 1866. Areas designed according to the principles of landscape gardens can be found above all below the castle in the form of the boscage and Fantasie grove.

The principles of English landscape gardens were also implemented consistently in the Gustavsgarten, the only “Prince’s Garden” along Tannenwaldallee to have survived. In the Kleiner Tannenwald just a few steps away, on the other hand, geometrical and landscape design elements are combined. To the north of the pond is a formal parterre divided into four individual sections; south of the pond is a boscage characterised by conifers. The pleasure wood “Die Große Tanne”, the Forstgarten and Hirschgarten, by contrast, are located in an area known as Großer Tannenwald. This is a large fir forest which stretches like a woodland park along Elisabethenschneise, the continuation of the Tannenwaldallee, and as far as the Limes. The Forstgarten has taken on the special role of a tree nursery.

Even if the Landgraves’ Garden Landscape has only survived in part, it is – along with Bad Homburg Castle Park – the legacy of garden design left behind by the landgraves and landgravines of Hessen-Homburg. As such, it is of enormous significance for the urban landscape and the quality of local recreation in Bad Homburg.

The Castle Park (Schlosspark) is a good starting point for visiting the Landgraves’ Gardens. These stretch along Tannenwaldallee and Mariannenweg before continuing along Elisabethenschneise. Exploring the gardens on foot or by bike is recommended as Tannenwaldallee has traffic-calmed areas.

Entrance prices:
All areas are open to the public free of charge.

WC:
A public WC can be found in the vestibule of the Königsflügel (Royal Wing) of Bad Homburg Castle

Parking:
Visitors starting their visit in the Castle Park can park in the “Schlossgarage” public car park: Herrngasse 1 (access via Ritter-von-Marx-Brücke). Good parking is available in the ramblers’ car park at the end of Tannenwaldallee (Tannenwaldweg 100B). This car park is a good starting point for exploring the Garden Landscape.

Accessibility:
The park and gardens are not fully accessible to visitors with disabilities. The main paths in the Castle Park, Gustavsgarten and Kleiner Tannenwald are accessible to people with reduced mobility.