Leiden Botanical Garden/Hortus Botanicus – A Green Oasis in the City 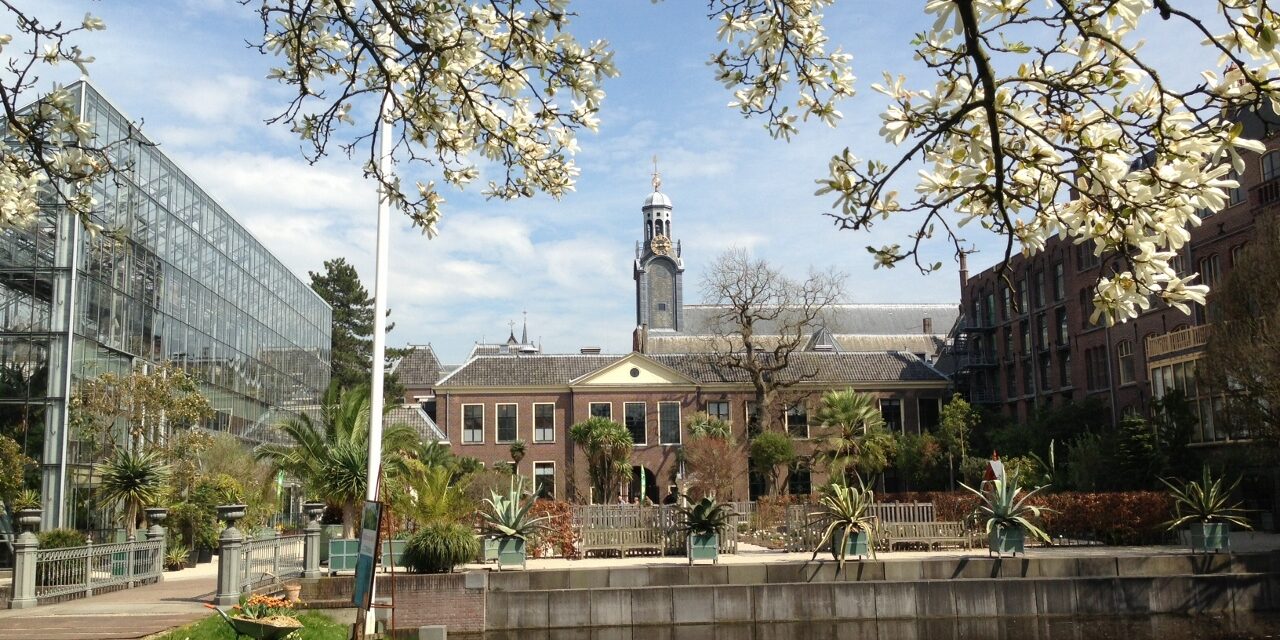 The oldest Botanical Garden in western Europe, the Hortus botanicus, can be found in the historical centre of Leiden. This impressive garden presents an unusual collection of plant species from Asia, southern Europe and North America, among them collections of carnivorous plants, cycads, tropical orchids, wild roses from Europe and Asia, peonies, ferns, bulbous plants and tubers.

The Botanical Garden has been the teaching garden of Leiden University since as far back as 1594. It was laid out behind the Academiegebouw and extended over the following centuries to its present size of 3 hectares.

The Clusius Garden, named after the founder Carolus Clusius (1526 – 1609), is a reconstruction of the original creation from this period. A diverse garden has developed as a result of four centuries of collection, care and study. Visitors can experience both this diversity and the garden’s history in the greenhouses and in the variously designed garden areas, among them a Japanese garden, a rose garden, a fern garden, a system garden and – since 2015 – a Chinese herb garden.

The Hortus botanicus – a green oasis of tranquillity – was created for research and instruction in 1594 as part of Leiden University. It is located in the south-western part of Leiden city centre and is bordered by Gracht Witte Singel to the west. Even at that time, the garden was open to all citizens, a situation which was unusual for the period.

Visitors enter the garden through an archway beside the monastic church, which was converted into the university in 1581. The entrance is flanked by a laburnum (Laburnum anagyroides) planted in 1601 and a mighty tulip tree (Liriodendron tulipifera) planted in 1715. The courtyard with the reconstructed Clusius garden of 1594 is the oldest part of the Botanical Garden. It is divided into four squares in the style of a typical Renaissance garden. The gates and beech hedges emphasise the garden’s secluded character.

In summer, splendid plants such as the hundred-year-old aloe Agave americana and pineapple trees are placed around the garden and at the semi-circular pond formed by an outward curve of the Binnenvestgracht, which cuts through the garden.

Many exotic trees grow in the Hortus, some of which are more than 100 years old and boast mighty crowns. They give the garden its unmistakeable character and include, e.g. a Japanese nut tree (Ginkgo biloba) and a Japanese elm (Zelkova serrata).

The last turn of the century was celebrated with the opening of a new greenhouse, the “Wintertuin” (winter garden). This structure, designed by Jan Hubert Henket, houses a collection of cycads, some of which are up to 500 years old. Various species of pitcher plant (Sarracenia) thrive under the glass roof and can be reached by way of the stairs. A sweeping view over the Botanical Garden can be had from here.

The garden has been home to a collection of tropical plants since the 17th century. Construction of the present-day tropical greenhouses began in 1935. Banana plants and various species of spices such as cinnamon, nutmeg, ginger and pepper thrive in the warm and humid climate as do carnivorous plants of the Nepenthes species (pitcher plants). Tropical orchids from south-east Asian also form one of the main focuses of the plant collections.

The “Queen of Water Lilies” (Victoria amazonica) has been cultivated here since 1872 and has been presented in its own greenhouse since 1938. The plants are grown from seed and brought to flower every year.

Designed by Japanese garden architect Nakamura, the Japanese garden was created in 1990 in memory of Dr. Philipp Franz von Siebold (1796 – 1866) to mark the 400-year existence of the Hortus botanicus. More than one hundred different species of garden plants and wild plants from Japan grow here, among them maples, hostas and hydrangeas. The garden is bordered to the east by a red stone wall while its centre is dominated by a Japanese elm.

The rose garden presents almost two hundred different species of wild rose from Europe and Asia as well as apothecary’s roses and cabbage roses. It displays the full splendour of its blossoms in May and June.

1995 saw the starting of a collection of shrub and herbaceous perennial peonies (Paeonia lutea andPaeonia lactiflora), which are shown in various places in the garden and are also in full bloom in May and June.

Bulbous plants and tubers are inseparably linked to the history of the Hortus. Carolus Clusius (1526 – 1609) already brought a collection of tulips from Vienna. The development of a special collection of bulbs and tubers continues to this day and good relations are also maintained with the nearby Keukenhof.

The new system garden can be found along the Binnenvestgracht. It features a series of small beds where the botanical world is presented in accordance with the latest scientific insights. Information panels provide extensive botanical information.

Since 1993, the Hortus has also been home to a fern garden with a collection of various ferns from Europe, North America and Asia.

The Hortus botanicus was extended to the south in 2011 to include the area around the observatory. Asian plants are presented in six biotopes here and a number of Dutch biotopes are also shown: woods, moor and dunes in addition to the calamine flora of South Limburg, which is unique in the Netherlands.

The most recent addition to the Hortus is the Chinese herb garden created in 2015.