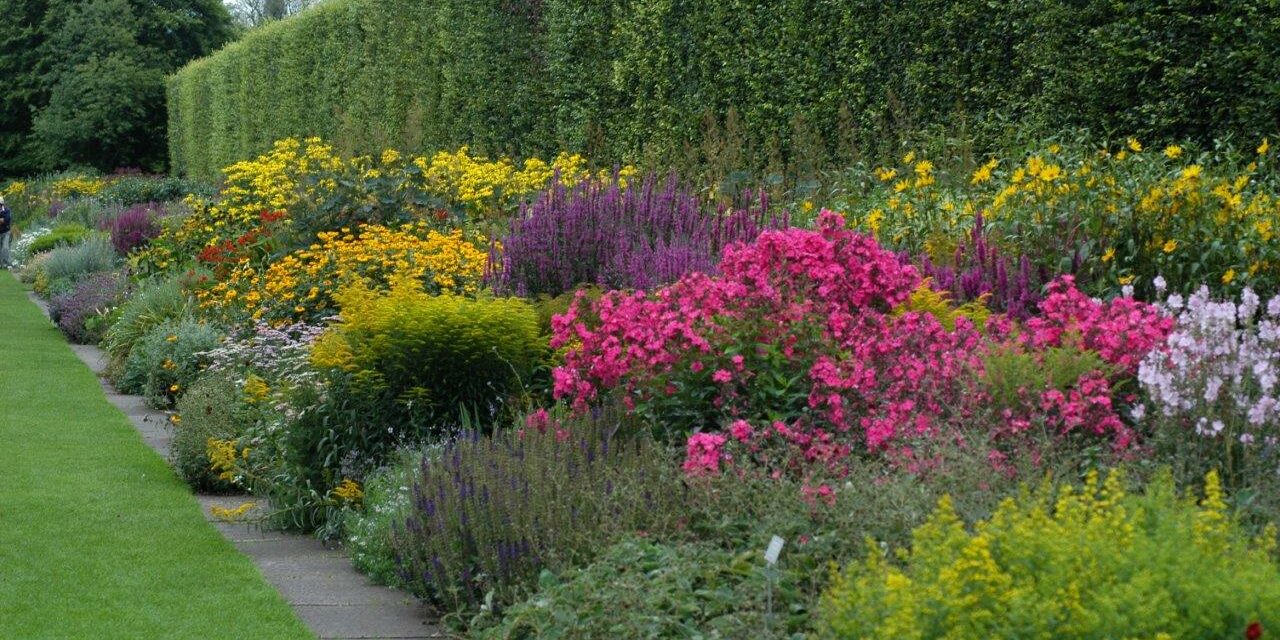 The Royal Botanic Garden Edinburgh (RBGE) is one of the world’s leading botanic gardens. Visitors can discover its history dating back to 1670, learn about its plantings and walk around 28 hectares of beautiful landscape.

Founded in 1670 as a Physic Garden, the Royal Botanic Garden Edinburgh (RBGE) is a world-renowned centre for plant research, conservation and education. The mission of RBGE is to explore, conserve and explain the world of plants for a better future.

Founded in 1670 as a Physic Garden, the Royal Botanic Garden Edinburgh (RBGE) is a world-renowned centre for plant research, conservation and education. The mission of RBGE is to explore, conserve and explain the world of plants for a better future.

Home to around 5,000 species from the mountain ranges of the world, in particular large concentrations of plants from Chile, China, Europe, Japan, North America and South Africa, the Rock Garden was first created in 1870 by Curator James McNab to accommodate the garden’s growing alpine collection.

Alongside the alpine species are many small woody plants and bulbous species that complement the landscape. There is a range of small conifer species as well as many dwarf conifer cultivars.

Among the highlights are spring-flowering bulbs including snowdrops, daffodils and crocuses. Late spring and early summer see the peak flowering of the dwarf rhododendrons and alpines. At this time the high alpines are at their best, from the beautiful European Pulsatilla to the North American Penstemon. Autumn highlights include the flowering of numerous Colchicum species and the needles of Pinus sylvestris ‘Aurea’ turning from green to golden-yellow.

The Woodland Garden was extensively developed in the 1930s and 1940s, with large conifers planted to create a suitable microclimate for the rhododendrons and other woodland plants that were being introduced from the Himalayas and China.

The Upper Woodland Garden is home to some magnificent trees, including coastal redwoods, Sequoiadendron sempervirens, among the world’s tallest tree species. A circle of giant redwoods Sequoiadendron giganteum creates a cathedral-like atmosphere.

Other trees include endangered conifers from around the world. Unusual rowan and birch add to the autumn colour with their fruits and turning leaves and sit alongside magnolia species from Asia and North America that flower in spring.

Understory plantings of large-leaved rhododendron species and woodland herbaceous plants thrive in the microclimate created by the canopy. Some of the older rhododendrons were collected in the early 20th century.

Collections of herbaceous plant include a collection of North American trillium species, meconopsis (Himalayan poppies), alongside other species from Asia and Europe, including hosta, lily and primula.

The Woodland Garden includes the terraced Peat Walls, where a damp, shady habitat allows the cultivation of many choice species. Constructed in 1939, the area is terraced with oak logs and pine root plates creating the perfect habitat for dwarf ericaceous shrubs, autumn-flowering gentian species and drifts of primula from the Himalayas.

Highlights of the area are the dwarf rhododendron species flowering in spring alongside delicate erythroniums and primulas. Autumn sees colour return with the fabulous turning leaves of the shrubs and the gentians carpeting the ground.

China’s rich flora remained unknown in Europe until around 150 years ago, when plant collectors such as George Forrest began to explore the world, returning with thousands of plant specimens. Forrest made seven trips to Yunnan between 1904 and 1932, and the seeds he brought back changed the face of British gardens, introducing the now familiar rhododendrons, primula, camellia and many more for the first time. Since that era RBGE has worked with partners in China.

The Chinese Hillside, formally opened in 1997, recreates for visitors the experience of climbing a hillside in Yunnan. It includes winding paths, a waterfall and a small pavilion or a T’ing, with a nearby Stupa and features around 16,000 conservation plantings collected from Yunnan. The plantings follow the ecological course of a hillside in the wild, with different species appropriate to the ascending altitudes.

Adapted to wild, high mountain tops, alpines are a real challenge to grow in the very different habitat of the maritime lowlands, such as Edinburgh. As many alpines cannot tolerate the wet Scottish climate, the traditional-style Alpine House was built in the 1970s to provide a dry environment for the plants.

In the Alpine Yard, a range of troughs are used to create individual landscapes representing miniature mountain tops. The wall retaining the Courtyard is one of the only limestone walls in the Garden and was bult to accommodate plants that like more alkaline soil and enjoy a deep root run.

The Garden’s Tufa House is the first building in a British botanic garden dedicated to growing and displaying alpine plants in the naturalistic surroundings of tufa.

The plants grown on the tufa wall are all cliff-dwellers in their natural habitats, where their seed will blow into cracks and fissures in rock faces and become established.

The wall backing the Alpine Courtyard is one of the few south-facing walls in the Garden, creating an opportunity for climbing plants from warmer climes to thrive alongside a ‘hot border’ of spiky shapes and brilliant colours. Highlights include the South African Phygelius copensis and Agapanthus campanulatus in summer months. The pineapple broom or Cytisus battandieri, hailing from Morroco, produces sweetly scented pineapple flowers atop its silvery foliage, while contrast is provided by the beautiful long-lasting blue ‘thistle’ flowers of Eryngium giganteum.

At a commanding height of 8m the Beech Hedge reaches along the full 165m of the Herbaceous Border.

The Herbaceous Border was created in 1902 by Regius Keeper Isaac Bailey Balfour and his Head Gardener Robert Lewis Harrow.

The adjacent Herbaceous Border provides a riot of colour throughout the summer season. Its plantings represent the spectrum of colours of the rainbow from hot reds to cool blues, purples then whites, to ensure that it is at its most vibrant during July and August, thus after the peak rhododendron flowering.

The Biodiversity Garden contains over 500 different plants, each selected to tell a particular story.

The garden includes specimens from many different families, with a wide range of diversity of leaves and flowers. Plants with different forms such as bulbs, herbaceous plants, shrubs and climbers are represented. Many plants that are a source of food, medicine, dyes and fibres have been included in the design.

The iconic glasshouses are currently closed due to major restoration and refurbishment work as part of the seven-year Edinburgh Biomes project.

Admission prices: Admission to garden is free. There will be admission fees to the glasshouses when opened again after restoration.

Events, exhibitions: Regular events and exhibitions are held at the garden throughout the year. To find out what is happening visit www.rbge.org.uk

Customer services:
– Coffee bar/ Terrace Cafe / Gateway Restaurant
– Botanics Shop and plant sales
– WC: Toilets, Disabled Toilets and Baby Changing facilities are provided.
– On-street parking. Metered Monday to Friday, free at weekend
– Accessibility: Paths are accessible and steps can be avoided. Wheelchairs and electric mobility scooters are available on loan. To pre-book call 0131 248 2909
– Children’s programme: Regular events are held for children at weekends and during school holidays. See website for details – www.rbge.org.uk
– Map of the site, additional information: Garden maps available on our website or from the Visitor Welcome Team on arrival at the Garden
– Dogs: Only registered assistance dogs are allowed in the Garden.