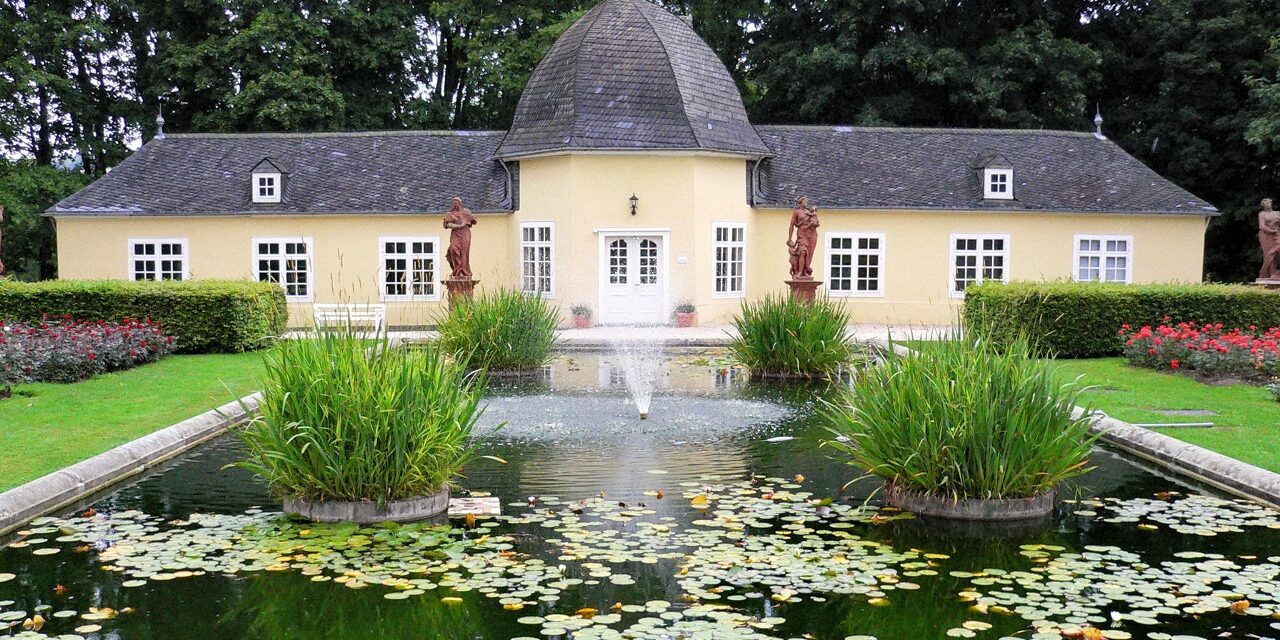 Schloss Berleburg is surrounded by a large park which was created during the first half of the 18th century.

A side entrance from the castle courtyard leads through a wrought-iron gate into the former Baroque Kreuzgarten. This part of the garden is bordered along Parkstrasse by an avenue of chestnut trees and a natural stone wall adorned with cherubs made of sandstone.

The small pavilion in the Kreuzgarten offers visitors a beautiful view of the western area of the park, which lies in the Berlebach stream valley. A path which opens up time and again to reveal interesting views into the landscape-style park runs alongside the castle walls on one side and slopes planted with fruit trees on the other. The park’s current appearance is defined by large lawns, small ponds and lush herbaceous beds. There is a charming interplay of colours above all in spring, when the rhododendrons are in flower, and in autumn, when the foliage of the Japanese Maples turns a fiery red.

Deep in the south of Westphalia, in the district of Siegen-Wittgenstein, lies the town of Bad Berleburg. The impressive castle, which is the ancestral seat of the family of Sayn-Wittgenstein-Berleburg, is surrounded by a large park.

A side entrance from the castle courtyard leads through a wrought-iron gate into the former Baroque Kreuzgarten. This part of the garden is bordered along Parkstrasse by an avenue of chestnut trees and a natural stone wall adorned with cherubs made of sandstone.

At the end of the avenue is an 18th century entrance gate, the natural stone pillars of which are mounted with fixtures which once served as sundials. At that time, the main path from the agricultural estate and nursery led through the Kreuzgarten to the entrance in the “red tower” in the castle’s north wing.

A plan dating from 1772 shows the castle moat, which was originally filled with water and which is still recognizable today as a depression in the lawn. Four rectangular flowerbeds with a circular flowerbed or fountain at the centre can be seen in this representation of the Berleburg Kreuzgarten, the oldest known to date. This design possibly gave the garden its name due to the cross-shaped layout of paths.

The plan from 1772 also shows the still surviving summer pleasure house at the western end of the garden. This Baroque garden house was used for parties in the summer months and probably also served to house plants such as orange and lemon trees in the winter.

It is not known how long the Baroque style of the Kreuzgarten existed. The garden was, however, redesigned towards the end of the 19th century. A land registry plan from 1907 shows lawns with curved paths, a fountain in what was probably a metal basin, and a large circular patterned flowerbed. This scenario can clearly be seen in a photograph which likewise dates from 1907. The patterned flowerbed – a form of flowerbed which was popular in the late 19th and early 20th centuries – forms a raised mound and is interwoven with paths through the dense and colourful vegetation. A closer look reveals figures in front of the summer house. These were likewise originally whitewashed.

A rectangular pond surrounded by rosebeds can be found in front of the summer house.

The small pavilion in the southwest part of the Kreuzgarten offers visitors a beautiful view of the broad sweep of the western park in the Berlebach stream valley. A charming path which opens up time and again to reveal interesting views of the landscape-style park runs alongside the high castle walls on one side and steep slopes planted with fruit trees on the other. The direct route from the Kreuzgarten to the valley area of the park follows a path which runs along a slope and passes through the splendid avenue of maple trees below the pavilion.

The park along the Berlebach stream was originally a “Thiergarten” which was created in the first half of the 18th century and populated with wild native animals and exotic species.

Fowl such as golden pheasants, peacocks, guineafowl, duck and geese were kept for fine cuisine in a pheasantry. A pond in the centre of the garden was fed by the Berlebach stream and was used for breeding fish. The actual wildlife park – a hunting ground consisting of woods and meadows designed for the breeding, care and hunting of native and non-native wild animals – was fenced off. A clearing in the woods was home to a small orchard with a folly. This was described as “Chinese” due to its pagoda-like roof.

Further buildings such as a shooting box and a stone grotto, the locations of which can still be identified in the grounds, are marked on the plan. The only surviving building is the small half-timbered house on the main path, the fundamental structure of which probably dates back to this period.

The wildlife park was redesigned as a landscape park in the late 19th century, the historical network of paths largely being retained. Since that time, further ponds, lawns and herbaceous beds have been created. These define the park’s appearance today. There is a charming interplay of colours above all in spring when the rhododendrons are in flower, and in autumn when the foliage of the Japanese Maples turns a fiery red.

The ground rises steeply to the west towards the forested park. A stroll through the wood repeatedly reveals impressive views across the valley to the castle on the other side. A visual axis leading to the “Bergquelle” can be found in the southernmost part of this section. The area surrounding this mountain spring was probably created when the park was being landscaped at the beginning of the 19th century. 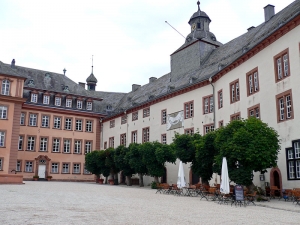 Tourist information:
Shop: No
Cafe / Restaurant: In the village
WC: No
Parking: nearby

Benches in the park: Yes
Barrier-free access: The main routes are accessible to people with mobility disabilities.

Dogs: Dogs should be kept on a leash