The park consists of the Volkspark and the 3-hectare Botanical Gardens. The Volkspark was created by F. W. Schoedder of Iserlohn in the style of an English landscape garden from 1909 – 1914. Typical features include broad curved paths, rising and falling ground, groups of trees as backdrops, and lines of sight. A special feature is the “Eiswiese”, which is used for skating in winter. Old varieties of fruit such as “Schöner aus Wiedenbrück” are grown in the orchard. Furthermore, attractive playgrounds such as the climbing area were installed.

The Botanical Gardens were created from 1912 onwards under the direction of Karl Rogge, who designed a show garden with typical features of geometrical garden design. Among these are pools with geometrical surrounds, arbours and high hedges of hornbeams.

Additional gardens such as the “sun garden”, a medicinal garden, a “fountain garden” and a semi-natural garden were created during the last phase of enlargement in 1997/8. Olafur Eliasson’s “scent tunnel” is a permanent installation. Finally, the tropically-themed Palmenhaus Café is worth a mention.

From the end of the late 19th century onwards, numerous large parks were created in the industrial towns of Ostwestfalen-Lippe as places for relaxation, recreation and physical exercise. Rapid industrialisation and population growth were accompanied by an increasing deterioration in living conditions for large sections of the population. In order to compensate for this, parks were created for the town citizens, often under the direction of the newly-founded Grünflächenämter, which were responsible for the care of green spaces.

The approximately 15.5 hectare park in Gütersloh consists of two parts with differing designs: the Volkspark, which is designed like a landscape, as was the tradition in the 19th century, and the adjoining three-hectare flower gardens or Botanical Gardens.

The Volkspark was created from 1909 – 1914. F. W. Schoedder, a garden designer from Iserlohn, was commissioned to plan the park. Under his direction, a park featuring distinctive elements of an English landscape garden was created. Broad curved paths, gently rising and falling ground, groups of trees as backdrops, and lines of sight surround a long broad path. Carefully tended paths and tranquil spots provided the town population with a near-natural space for leisure and relaxation.

A special feature of Gütersloh Volkspark is the Eiswiese and its “Liebesinsel”, located at the south edge of the park. At the turn of the 20th century, this natural expanse of ice was already used by the population for ice-skating and other forms of recreation. During the restoration of the park in 2002, the Eiswiese once again took on its former function.

The orchard at the entrance to the municipal park has an historical emphasis. Old and almost forgotten varieties of fruit such as “Westfälischer Gülderling” or “Schöner aus Wiedenbrück” are grown here.

In addition, interrelated views were created in the park and the network of paths and the playgrounds were renewed.

Work on the Botanical Gardens at the edge of the municipal park started in 1912. Karl Rogge (1884 – 1958), the first municipal gardener in Gütersloh, created a show garden with elements of geometrical design typical of the period. He had come into contact with the English movement in favour of reforming garden design on an extended trip to South Africa. Unlike the geographical systemisation common in collections in traditional botanical gardens, Rogge created a special garden as a model for the villa gardens of prosperous Güterlsoh citizens. The dominant structural elements are geometrically-enclosed pools, arbours with seats and high hedges of hornbeams. New and surprising views from the arbours are also a feature.

This charming design is enhanced by a wide variety of selected plants. Rogge worked on the concept of the flower gardens over several decades. New areas continued to be added up to 1952. In 1992, old plans and photographs were used as a basis for major restoration work on the gardens. Additional special and themed gardens were added during the last phase of expansion in 1997/98. The “sun garden”, medicinal garden, “fountain garden” and semi-natural garden make the Botanical Gardens an attractive and popular destination for outings. One reason for this is also the Palmenhaus Café, which is integrated into the gardens.

The “scent tunnel” created by the Danish-Icelandic artist Olafur Eliasson resulted in a permanent installation consisting of 50 different shrubs and bushes. A sensitively-arranged, co-ordinated composition of roses, clematis, lavender and thyme produces subtle scents and spicy aromas. This composition winds its way around a shiny, twelve-sided steel structure, which forms a kind of arbour. The aim of the “scent tunnel” is to sensitise the visitor’s perception to changes in nature. At some stage, nature will simply take over the structure.

Whatever the season, Gütersloh municipal park and the Botanical Gardens have something to offer. The wonderful splendour of blossoms in early summer is particularly attractive. On clear frosty days, on the other hand, the Eiswiese is an invitation to go ice-skating.

Gütersloh municipal park and Botanical Gardens combine to form a well-preserved and, above all, well-tended park. This is an excellent example of a type of park which has been neglected in Westphalia to date. 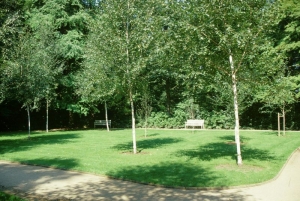 Admission Prices:
No admission fee. Admission charged for some events

Access for People with Disabilities:
The paths in the park are suitable for people with limited mobility

How to get there:
Bus no. 45 from Gütersloh railway station in the direction of Auf`m Reck as far as Am Anger; 4- minute walk