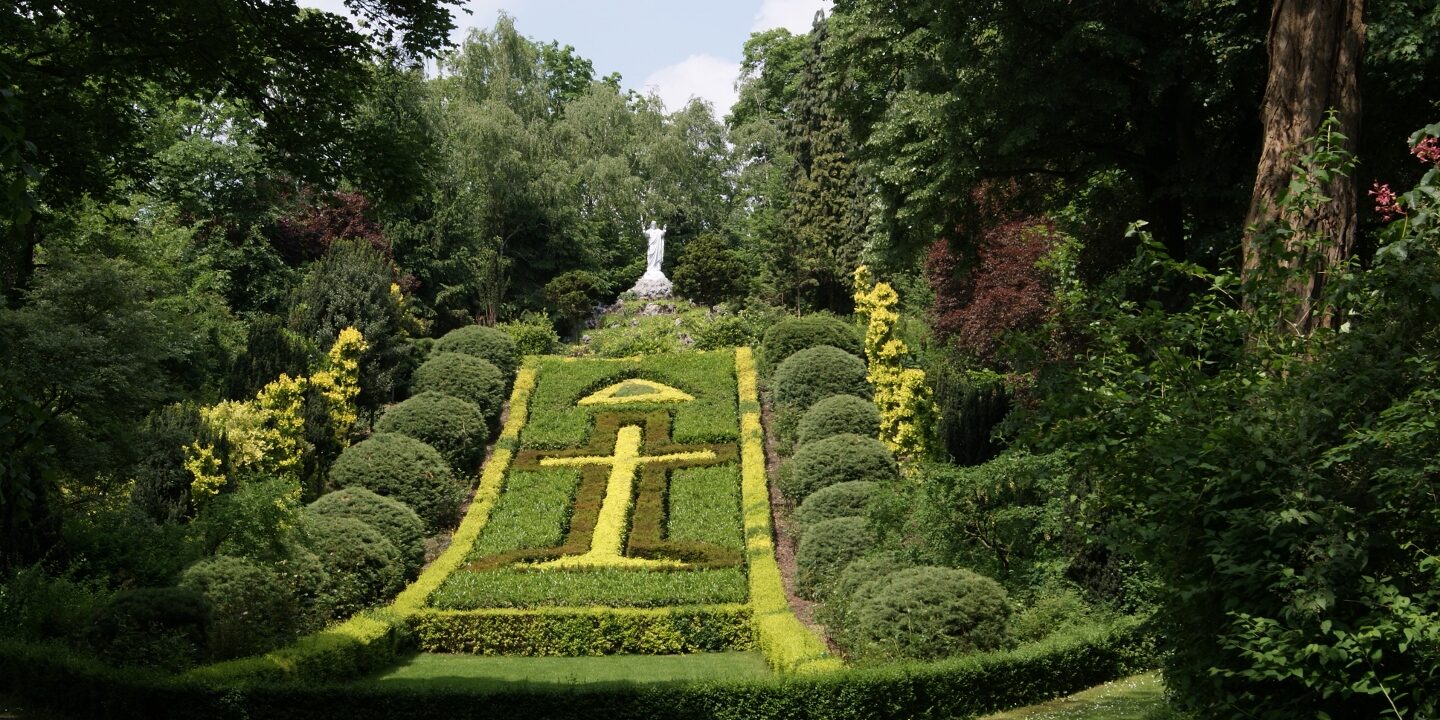 Steyl convent gardens and Jochumhof botanical garden comprise an important example of garden history. Together, the three religious houses and the gardens form a unique ensemble with a special character. Because of this, Steyl convent village was given listed status as a state-protected monument in 2008.

Visitors will find cloistral silence and meditation in both the small and large park as well as in St. Gregory’s garden. Rhododendrons flower in June in the small park while wisterias cover the pergolas with a profusion of blue blossom in St. Gregory’s garden. Here, beds of herbaceous perennials and vegetable patches are flanked by fruit trees. The large park is dominated by the Sacred Heart mound and the convent cemetery with the Way of the Cross. Curving paths through the gently rolling, wooded grounds lead the visitor to viewing points and quiet spots for contemplation.

A lush profusion of flowers surrounds the historical building in the small botanical garden Jochumhof, which boasts a terrace with sweeping views over the Meuse river. Cacti and succulents from all over the world grow in the greenhouse.

The parks of the convent village consist of several gardens which were created gradually during the development of the mission village. They form what is now a rare example of Roman Catholic park and garden culture from the late nineteenth century. In the past, many pilgrims and members of the religious orders from the surrounding environs came to visit these parks, which require a great deal of care and maintenance and many of which no longer exist today. The convent gardens at Steyl, by contrast, have survived intact.

Visitors enter the convent gardens through the gate opposite St. Michael’s, the mission house. In St. Gregory’s garden, the profuse wisterias dominate the vegetable patches and beds of herbaceous perennials, which are in turn flanked by fruit trees. The latter become scented espaliers when they flower in spring.

The small park is located directly adjacent to St. Gregory’s garden. Rhododendrons flower here in June, growing over the entrances to the Mount of Olives grotto and the Maria grotto below the crucifixion scene. Father Rademan, who worked as a gardener before entering the order, made the Marian grottoes out of building rubble. He possibly also designed other areas of the park, which probably date from the second half of the nineteenth century. Visitors can read various passages from “Ave Maria Stella” on plaques in the Maria grotto.

The large park is reached by walking along a small road beside the old, weather-beaten greenhouse. Features which can be found in the extensive, gently undulating gardens include a Lourdes grotto from 1922 with pictures of the Virgin Mary and Bernadette Soubirious and the  Sacred Heart mound. It is a now rare garden element designed in “gardenesque” style. Religious symbols composed of shaped shrubs and flowering plants, akin to a mosaic, can be seen on the flank of the mound. The German origin of the missionaries becomes evident here, “patterned flowerbeds” of this kind composed of artistically trimmed shrubs and contrasting, low-growing flowering plants being a very popular element in German garden design.

The main element in this “plant picture” is a large cross on a plinth. Above it is the “Eye of Providence”, a triangle of flowering herbaceous perennials. A Sacred Heart statue stands between two pine trees on the top of the mound. It is a copy of the Sacred Heart statue on Montmartre in Paris.

The cemetery, which is enclosed by a wall and laid out on various levels, is planted with cypresses and evergreen shrubs and has the air of an Italian graveyard. The chapel is located at the highest point. The Way of the Cross, with stations designed by Carl Weber of Trier, depicts scenes from the Passion of Christ on the way to Mount Golgotha.

Walking along the curved paths, the visitor becomes much like a pilgrim, discovering the individual gardens and small valleys which are dedicated to various saints and which to some extent still contain original sculptures.

The Jochumhof is located at the southern edge of the convent village. This botanical garden, which functions partly as a teaching garden and partly as a botanical collection garden, has been in existence since 1933. That was the year when biology teacher Pater Peter Jochum (1890-1979) took the initiative and created the garden with his pupils. The garden has been administered by a trust since it was separated from the school in 1971.

The original layout of paths can still be seen in the rock garden today and the botanical collection of trees and bushes also dates from this period.

Herbaceous perennials, cacti and succulents are sold in and around the greenhouse, which also houses tropical and sub-tropical plants.

A small stream, pools and ponds of varying sizes, features with splashing water, and many different benches and chairs in sunny and shady spots provide a garden experience for all the senses throughout the seasons.

The historical outbuilding of Jochumhof is now home to a café and is surrounded by various flowering gardens of herbs, scented plants and herbaceous perennials. Visitors who sit on the side facing the gardens can enjoy the wonderful blossom when having coffee and cake under the spreading gingko tree. The sun terrace, which is planted with mulberry trees, offers a view of the Meuse, including a ferry docking point and a lock about 2 km away – a stroll there is a worthwhile walk along the Meuse.

Both the botanical garden and the restaurant in the outbuilding are run and maintained by a team of voluntary workers. The ambitious project relies on proceeds from the entrance fees and restaurant in addition to donations. 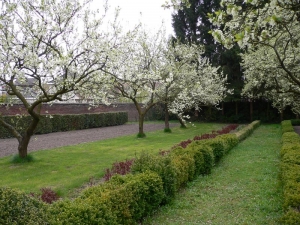 Opening times:
Open from 09.00 – 17.00.
Access to the grottos by key only, which is available at the reception of the mission house.

Please respect the character of the site as a place of silence, meditation and contemplation. 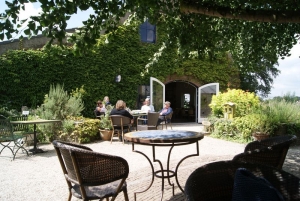 The Botanical Garden as well as the tea room are managed by a charitable organisation and a group of volunteers.

Admission Prices:
3,50 Euro, this includes a free drink at the tea room. Income generated is contributing to the managament of the garden. Guided tours upon request.