The Gardens of Gunnebo

Gunnebo House and Gardens is one of Sweden’s foremost 18th century estates and is beautifully situated between the lakes Stensjön and Rådasjön in the city of Mölndal, just south of Gothenburg, West Sweden. The house establishes the core of the estate and is surrounded by the formal gardens, the kitchen gardens, the English landscape park and other buildings, such as the orangery, the greenhouse and the farm buildings.

Gunnebo house and gardens were designed by the architect Carl Wilhelm Carlberg as a totally designed site. The formal garden links the built environment to the surrounding landscape. It is a classical architectural garden based on axiality and symmetry. Through the house in the centre of the garden and to the south and north there is a strong main axis leading on into the landscape. Surrounding the main axis all decorative elements are positioned symmetrically. The formal garden is authentic to its ground structure and much of the decorative and architectural elements have been reconstructed during the last two decades. Ornamental urns, plants, fences, furniture etc. have been reconstructed based on the original designs by C. W. Carlberg from the 18th century.

The northern formal garden is richly decorated with conically cut hornbeams and lime hedges. A terraced entrance garden is leading up to the house in the centre.

The western formal garden is a restored terrace next to the house. Around the terrace there are meadows and some old oak trees.

The eastern formal garden links the house with the formal gardens to the wings and the utilitarian gardens. It includes a giardino segreto, a secret walled garden, right next to the house, and a parterre with conically cut hornbeams.

East of the house and formal gardens, the kitchen gardens are situated. They were also designed by the architect Carl Wilhelm Carlberg as part of the estate in the late 18th century. The old kitchen garden was, most likely, already present and was incorporated in the new grand design by the architect. It was a working garden from the 18th century right up until the 1940´s when it vanished. The old kitchen garden was reconstructed in 1996 based on the original design by Carlberg.

Today there are all kinds of herbs and espalier fruit trees as well as asparagus and rhubarb in the old kitchen garden. The cut flower garden adds to the attractiveness. The kitchen gardens are planned in close cooperation with the Gunnebo restaurant, situated in the middle of the kitchen gardens. All produce is seasonably used in the restaurant.

At the greenhouse terrace, the greenhouse was reconstructed in 1996-1998. As the original designs by Carlberg had been lost, other sources were consulted such as drawings and other greenhouses from the 18th century. Valuable information was also acquired from an on-site archaeological excavation. The greenhouse is the heart of the gardens during late winter and spring. Here all propagation of plant material for the kitchen gardens starts. The greenhouse is also used as an orangery for keeping exotic plants during the cold winter. In the summer the exotic plants are part of the decoration in the formal garden.

Gunnebo was created as a totally designed site by the architect Carl Wilhelm Carlberg with buildings, gardens and landscapes interacting intimately. The estate is a Swedish example of an ornamented Farm or ferme ornée. In an ornamented farm, utility and beauty are naturally united. The utilitarian aspects of life are not hidden away, but made part of the experience for the wealthy owners and their eminent guests. The landscape park was an expression of the 18th century’s natural romanticism and the developing interest in nature at that time. Landscape gardens were the most significant types of gardens during the 18th century, a garden type deriving influence from nature in contrast to the formal gardens.

At Gunnebo, the landscape garden consisted of serpentine walks, beautiful vistas, horticultural and interesting plant material, beautiful views towards lakes and fields in the surrounding landscape. In the English landscape garden, the hermitage, the temple and the orangery as well as the useful fields were part of the picturesque scenery. The English landscape garden has changed a lot from the 18th century until today. The thematic garden buildings and much of the horticultural plant material has vanished. However, some of the trees have grown into impressive solitaires. During the 2000s and 2010s, research and archaeological investigations added to the knowledge base about the landscape park at Gunnebo enabling a future restoration in a more authentic 1700s style, which included the English hill (Apollo’s Hill), Flora’s Hill, the Hermitage Forest and the Orangery Hill. 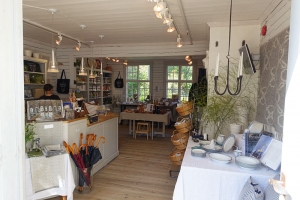 Entrance fee:
Free entry to the gardens
Entrance fee for the house (guided tours only) 90 SEK/person

Opening times:
The gardens are open all year
For the house, please see the website: www.gunneboslott.se