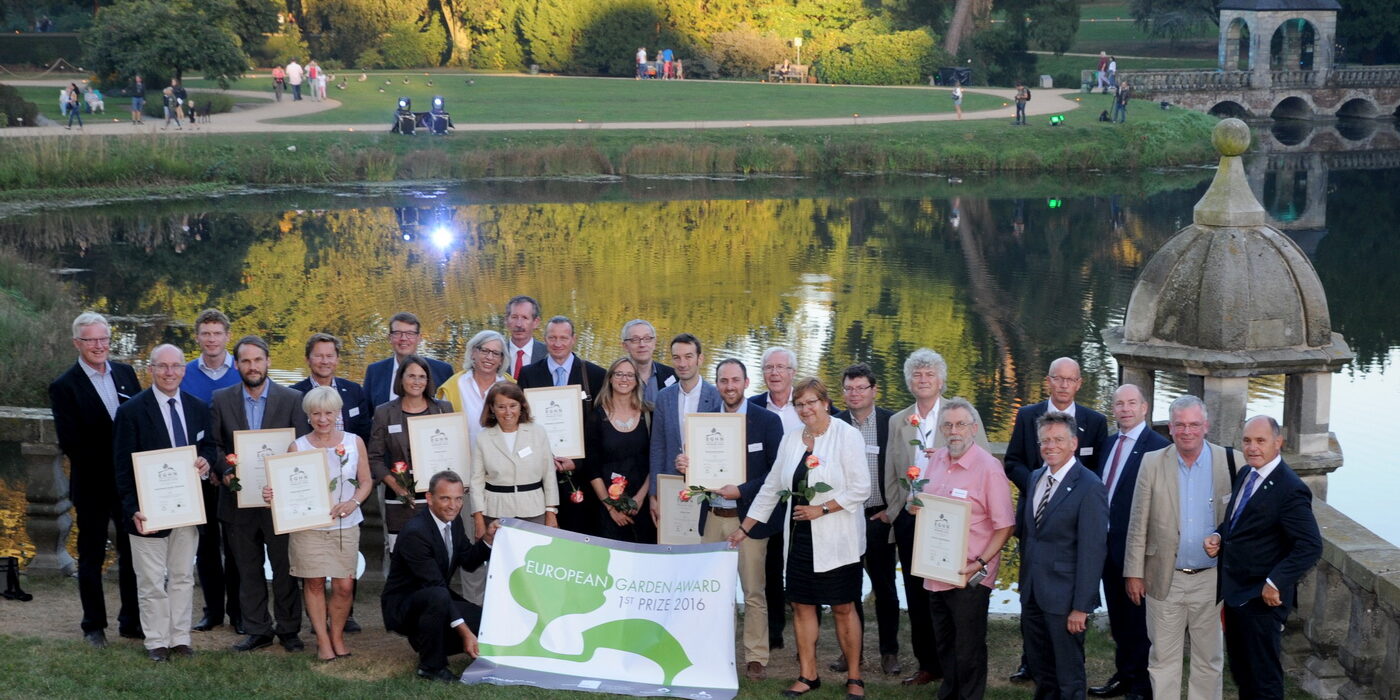 The seventh ceremony for the European Garden Award from the Schloss Dyck Foundation and the European Garden Heritage Network EGHN took place with about 120 invited guests in the Schloss Dyck grand ballroom on the afternoon of September 9, 2016. The awards go to four winners from Germany, England, and Ireland. Four 2nd Prizes go to Scotland, Spain, Sweden, and Germany.

The ceremony took place with the participation of the Minister of Interior of the Republic of Austria, Wolfgang Sobotka, and the North Rhine-Westphalian Minister for Federal Affairs, Europe, and Media and Head of the State Chancellery Franz-Josef Lersch-Mense.

• In the category “Best development of a historic park or garden”, a park in the UK has again been awarded first prize this year in this category with HESTERCOMBE GARDENS. While the formal gardens were restored in the 1970s – one of the first garden restoration projects in the UK – the famous landscape park with its numerous temples, waterfall etc. owes its rebirth in particular to the commitment of one man: Philip White. Today, Hestercombe Gardens is also the site of numerous art exhibitions and events. SCHLOSSPARK LUDWIGSLUST in Mecklenburg-Vorpommern took second prize for the exemplary restoration of the park and its buildings as well as the ROYAL BOTANIC GARDEN EDINBURGH for the quality of its collections, its pedagogical and social involvement, and the “return” of a building rich in tradition.

• In addition to the first prize winner in the category “Contemporary park or garden” the park of KLOSTER LORSCH, with which earlier uses are experienced again and relationships with the surrounding cultural landscape are made clear in this UNESCO World Heritage Site, second prize was taken by STADSPARKEN SKELLEFTEÅ (Sweden) connecting the older and the modern elements and thus creating an attractive link between the city centre and the adjacent riverside and by ATLANTIC PARK in Santander, Spain, which offers multi-level space for various uses and nature and is the core of urban expansion.

• The “Schloss Dyck Foundation Special Award” – this year for kitchen gardens – went to the BALLYMALOE COOKERY SCHOOL in Ireland. The jury was not only impressed by the variety of the fruit, vegetable, and herb gardens, which are organically farmed and contain many old varieties, but also by their integration into many other attractive garden rooms and in particular the direct use of crops in the cooking school with its holistic course offers which is increasingly gaining international reputation.

• The first prize for “Large-scale green networks and development concepts” went – after the first two winners from Scandinavia – to North Rhine-Westphalia this year. According to the jury, it is clearly due to EMSCHER LANDSCAPE PARK that the Emscher region and even the entire Ruhr region have undergone such a successful, structural change since the late 1980s. The Emscher Landscape Park is now a park for 5.3 million inhabitants, the adventure destination of international culture, provides new gardens in an urban landscape, and wild beauty the nature industry as well as sports and games on approximately 450 square kilometres. It is a much studied test case for similar development processes throughout Europe.