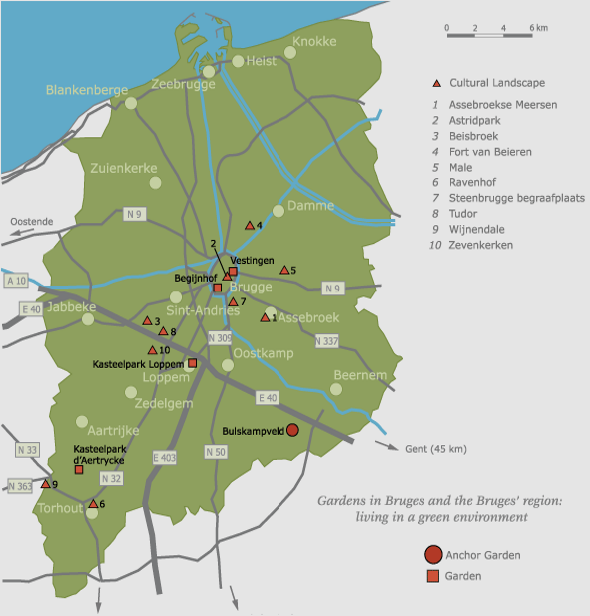 Gardens in Bruges and the Bruges Woodland and Wetland: living in a green environment

Old city maps of Bruges show how much green there used to be within the city walls: kitchen gardens, orchards, bleachfields and walled monastery and private gardens. As from the early 19th century numerous garden architects operated within the walls of Bruges. Due to the construction of new streets and houses in the 19th and 20th centuries much of the green has disappeared. The historical city centre nevertheless still features surprisingly many gardens and parks today. Most gardens are privately owned and cannot be visited.

Part of the public parks date from the 19th century, which is when the city council decided to upgrade the city, for example by constructing public parks. Of these parks the Botanic Garden (now called Queen Astrid Park) is the oldest: it was created in 1850 at the location of the former Franciscan monastery.

The most extensive green area is the belt of fortifications enclosing almost the entire city over a distance of more than six kilometres. The conversion of the fortifications into parks started in the middle of the 19th century. As from the 1970s various large private gardens were transformed into public parks, such as Hof Sebrechts in Beenhouwersstraat, Hof Dejonghe near Lange Rei and Minnewater Park. A special place of green and serenity is the Beguinage, of which the inner courtyard is planted with high trees. A typical feature of Bruges are the almshouses, complexes of houses for the elderly clustered around a flower garden. Some of these houses are open to visitors.

Until the beginning of the 20th century the area outside the city walls had a strongly rural character. The town centres of the satellite towns were limited in size and outside these centres pastures, fields, tree and laurel nurseries and forests could be found, the latter especially to the east and to the south of the city. The canals and arterial roads were lined with rows of trees.

In medieval times the wooded surroundings of Bruges were used as hunting grounds by the counts of Flanders. They built two residences in the area: Wijnendale Castle near Torhout in the late 13th century and the Castle of Male in the 14th century. Numerous smaller castles in the region around Bruges were the centre of a seigniory, an area governed and ruled by the lord of the castle.

In the 15th and 16th centuries wealthy citizens discovered the joys of country life. Old castles were refurbished and new castles were erected, either or not with a matching ornamental garden and farm. The publicly accessible castle grounds of Tillegem and Koude Keuken, both located in Sint-Andries, are a reminder of this fact. The Castle of Male, former residence of the Counts of Flanders, was also renovated in the 18th century in accordance with the then prevalent trends, and a formal garden was constructed around it.

After the French Revolution hundreds of acres of heath and woodland confiscated from the Church were sold publicly. Wealthy citizens invested money in these lands and transformed them into forests or agricultural land. On these vast domains they built summer residences in a variety of styles, such as the neo-classicist Beisbroek Castle and the neo-Gothic country residence of Tudor in the forests of Sint-Andries. The Bruges Woodland and Wetland consequently evolved into a real ‘castle landscape’ in the course of the 19th century. The highlights of this period of castle construction are without a doubt the Gruuthuse castle grounds in Oostkamp (not publicly accessible) and the neo-Gothic Van Caloen Castle in Loppem with its marvellous landscape park.

The edge of the city of Bruges underwent a spectacular transformation in the course of the 20th century and especially after 1950. The old town centres experienced a strong growth and gradually blended into one urbanised area. Numerous old castle grounds were nevertheless preserved, especially in the wooded areas. Several of them were purchased by the regional or local authorities (Flemish Region, Province of West Flanders, City of Bruges) and made accessible to the public, such as Tillegem, Beisbroek and Tudor.

The region Bruges Woodland and Wetland

The Bruges Woodland and Wetland is the green area around Bruges. Including the cities of Bruges and Torhout, the region covers 661 sq km and has some 275.000 inhabitants. To the north the North Sea can be found and to the east the Netherlands and the province of East Flanders. To the south is the Roeselare-Tielt region and to the west the Ostend-Gistel region.

The heart of the area is the historical city centre of Bruges, which is in its entirety included in the UNESCO World Heritage list. The streets and squares with their numerous ancient houses, the canals and bridges, the monuments and museums attract some 2.5 million visitors a year from all around the world. Tourism therefore is a major economic activity apart from industry, trade and services.

Bruges is the administrative capital of the province of West Flanders. The city is also an important educational centre, although it does not have a university. The city nevertheless boasts a prestigious postgraduate educational institute, the College of Europe.

It is less well known that Bruges also features a considerable green heritage, including monastery gardens, almshouse gardens, private gardens, public gardens, the Beguinage and the old city walls enclosing the city as a green belt over a length of six kilometres.

As regards landscape the Bruges Woodland and Wetland consists of two clearly different parts. To the North the Polders can be found. This area was influenced by the sea for a long time and only in the course of the Middle Ages was it definitively reclaimed from the sea through dyking and impoldering. The soil consists of clay. This was also the location of the Zwin, the sea inlet which contributed significantly to the emergence of the medieval city of Bruges as a European trade metropolis. The memory of the Zwin lives on in the nature reserve with the same name near Knokke, in the former port cities of Damme and Sluis and in the name Zwin region, which was given to the area between Damme and Knokke.

The polder landscape is open and flat with numerous drainage ditches and old dykes. It is criss-crossed by canals the banks of which are planted with trees which have grown crooked as a result of the predominant westerly winds. Scattered farms and picturesque villages such as Oostkerke and Lissewege can be found in this area. A considerable part of the polders between Bruges and Zeebrugge is now used as industrial land and as port areas.

The southern part of the Bruges Woodland and Wetland consists of sandy soil and is consequently called the Sand Region. It was originally covered with dense forests. The name ‘Woodland’, which is given to the area around Torhout, is a reminder of this fact. Increasing human influence – cattle breeding, logging – seriously affected these forests as from the beginning of the Christian era and in particular in the late Middle Ages. Fertile land was converted into arable land, less fertile land developed into heathland. In the area to the south and to the east of Bruges a number of toponyms ending in ‘veld’ to refer this situation: Vloetemveld, Bulskampveld … (‘veld’ = ‘heath).

In the 18th and 19th centuries parts of this heathland were reforested, for example with conifers. Furthermore, the use of guano, and fertilisers later on, made it possible to bring less fertile land under cultivation. The area to the south of Bruges is now a patchwork of fields, pastures and forests.

A striking element is the large number of castles in various sizes. Some are seven to eight centuries old, others are 18th or 19th-century summer residences of noble families from Bruges.