On Friday, 6th September 2013 the European Garden Awards by EGHN and the Schloss Dyck Foundation with support by Lorenz von Ehren Nursery were awarded for the forth time.

Here are winners and finalists of the European Garden Award 2013 in three categories: 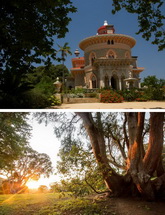 The decision of the jury for the Park Monserrate as the winner of the European Garden Award in the category for “Historical parks” was made not least because of the magic and romantic atmosphere that is emanated by it still today. Meanwhile it should really say “again today” as the comprehensive redevelopment and reconstruction of the park was only completed in the past 20 years. In 1995 the park was thereupon recognised by the UNESCO as World Heritage Site as a part of the palaces and parks in Sintra.

For this outstanding result, to which the association of “Friends of Monserrate” had made a great contribution, the park and all people involved were honoured this year. Monserrate owes its establishment to an English tradesman, who had his residence in Portugal built there. He and a some more English owners as well as the architects and gardeners contracted by them have created a park in the course of many years, in which the various eras of its history – and also its intermittent oblivion – can to this day be traced and experienced in diverse layers and garden areas.

Light and shadow, exotic and rare plants, winding paths and breath-taking views, but even new garden sections, such as the rose garden that was opened in the year 2011 by the Prince of Wales, make a visit to Monserrate, in spite of the many other wonderful parks in Portugal, an unique, fascinating and therefore “prize worthy” event.

Laudation (by Ed Bennis) and external link to Monserrate. 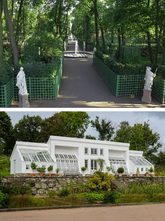 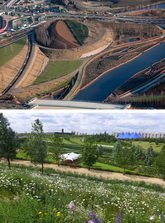 At the present time, the transformation into the new Queen Elizabeth Olympic Park is underway, which is managed by the London Legacy Development Corporation. The new park can rely on green areas of highest design quality having already been set up for the most various uses during the time of the Games. For example, picnic lawns and green arenas, which hold many visitors, were created as well as sites for cultural offers but also shrub plantings, flower meadows, water and shore areas with places for nature to retreat. Well-known landscape architects were involved here. Even indispensable removals, e.g. the wide service roads needed during the Games, have been included in the planning from the outset and have therefore been implemented as far as possible while sparing resources.

A first new park section was opened in August of this year to the residents of the surrounding city districts as well as for all Londoners and international guests to whom by now it has already become an important oasis and new green attraction in the British capital. 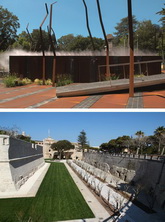 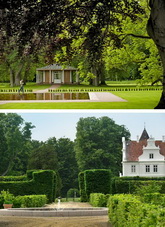 Castles and landed estates are very important in various regions of Europe for the richness of the cultural landscape. Not only the buildings and their parks themselves, but also the agricultural and forestation use, which originated from them, determine the landscape. In Denmark, the philanthropic Realdania Foundation with seat in Copenhagen, by now for the second time supports in a multi-year programme the preservation and reinstatement of these qualities, especially of historical parks around country manors and castles. For this purpose, the applicants, mostly private owners who emerge from the competitive procedure as winners, will receive well-founded specialist advice for the restoration measures in addition to specific funds. The owners undertake in return to make the park accessible to the public.

Realdania rightly understands its initiative as a contribution to the sponsorship of the local economies in rural regions as well. Because tourism takes up an important role, Realdania also points out these new qualities and trip destinations to initiatives and publications. For this sustainable commitment, Realdania received the Special Award of Schloss Dyck Foundation.

Laudation (by Roswitha Arnold) and external link to Realdania.

The European Garden Award is supported by: