This shows the winners of the 1st and 2nd Prizes of the European Garden Award 2016 in the four existing categories: 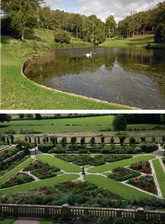 The gardens of Hestercombe are located only 6.5 km from Taunton in the county of Somerset. Hestercombe Gardens is a unique combination of gardens from three periods: a Georgian landscape park, a Victorian terrace garden, and a formal garden from Edwardian times.

The soldier and artist Coplestone Warre Bampfylde, who was known for his good taste in the design of gardens, created the landscape park in the mid-18th century. With the expansion of the Victorian terraces and planting various shrubs, his vision was expanded in the 1870s. Between 1904 and 1908, Sir Edwin Lutyens and Gertrude Jekyll eventually created the wonderful Edwardian gardens.

After a relatively short period of use, however, a long period of neglect of the gardens began and they grew wild for many years. In the 1970s, the terraced gardens and the formal gardens were restored by the Somerset County Council. This was one of the first garden restoration projects in the UK.

The landscape park was particularly wild at that time and was not included in the restoration work. Many structures were unrecognisable, a large lake was completely silted, and buildings such as small temples were falling apart. It was Philip White who discovered this sunken and overgrown paradise on a walk at lunchtime. He made its restoration his priority, in which he invested a lot of his time and for which he took out a mortgage on his farm. He founded the Hestercombe Gardens Trust, of which he is the chairman today.

Visitors can now rediscover old giant trees, streams, temples, lakes, cascades, lookouts and more on 17 hectares of landscaped grounds and thus take a trip through history. Hestercombe has thus been a full experience for several years now along with the other garden spaces and the newly established restaurants, shops, and showrooms.

But the daunting task is not yet over and the success story continues. With the acquisition of the mansion, formerly used by the Somerset Fire Brigade, in 2013, new uses and services for visitors emerged. In the house there are now attractive rooms for parties and other events, a new restaurant and, above all, an art gallery, which focuses on temporary exhibitions on land art and the connection between art, landscape, and gardens. 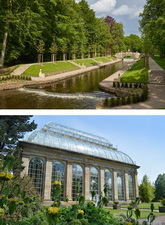 CATEGORY 2:
INNOVATIVE CONCEPT OR DESIGN OF A CONTEMPORARY PARK OR GARDEN 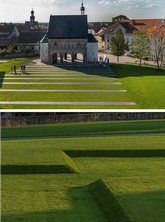 The Benedictine abbey in southern Hesse, Lorsch, ceased to be a convent in 1557. Although the former substance has been largely lost, Lorsch Abbey was recognised in 1991 as a World Heritage site, not least because of the gatehouse as one of the last Carolingian monuments and a testimony of the post-Roman period east of the Rhine. Highlighting the remaining relics, tracing marks, and carefully adding new structures to ensure that the history and importance of the site and its relation to the cultural landscape are recognisable and can be experienced again were the goals of the landscape architectural redesign.

As soon as they approach the site, visitors are given a sense of its scope and structure with views of the abbey walls and the higher-lying abbey grounds. You can find out more about the relationship between the abbey and its surrounding cultural landscape if you follow “Nature’s Path” or “Culture’s Path.”

Within the abbey walls, the former buildings (monastery church, enclosed atrium, conclave with cloister) and their configuration with each other through slight topographical changes are usually recognisable with precisely sloped depressions. The disappeared buildings have left their mark, so to speak, in the deep greenery. At the gateway changes from lawn and paved areas lead to an inclined plane, which is like a staircase with extra wide steps.

The herb garden behind the still standing tithe barn is a new element for which although historical evidence is lacking, its planting builds on the “Lorsch pharmacopoeia”, which was written in 800AD and recorded in the UNESCO Register of documentary heritage in 2013. The garden has many of the plants found there. With numerous dry stone walls, it nestles into a small hillside shaped as a terrace. It is a magnet for visitors with its blossoms and fullness of colours and the surrounding (fruit) trees. Its smallness is a stark contrast to the overall picture of the site and so it is not surprising that this herb garden behind the tithe barn has somewhat of a “hidden” effect.

Visitors are led here, as in the whole area, by a route structure that was placed like ribbons on the structures and their ends or bends do not “seamlessly” merge, but overlap and act as a kind of switch.

The European Garden Award jury agrees with the judgement of the jury of the German Landscape Architecture Prize awarding the Lorsch Abbey with a first prize in 2015: “Buildings, topography, and vegetation are combined both creatively and delicately as a very diverse “place of knowledge “, which is now very inviting as a lovely individual discovery of historically changing limits of nature and culture.“ 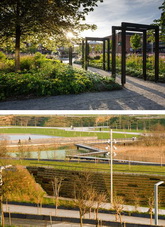 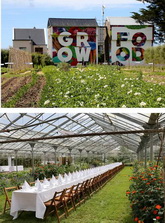 With this year’s theme “kitchen gardens”, the jury was asked to address the origins of gardening for the Special Award of the Schloss Dyck Foundation. Although early gardens were primarily used to grow fruits, vegetables, and other crops, gardeners were soon endeavouring to create an attractive design. The jury accepted this dialogue intensively, and a variety of outstanding gardens were found, many of which would have been worthy of an award. For some, the decorative use of crops is the priority, for others it is about the preservation of old species and varieties or currently also about alternative economies and social cohesion known as “Urban Gardening”.

A convincing combination of these and other aspects distinguishes this year’s winners of the special prize: the gardens of Ballymaloe Cookery School in Shanagarry Co., Ireland. These historic names stand for the programme of this easily 40-hectare organic farm: Ballymaloe means “place of sweet honey” and Shanagarry means “old garden” in Gaelic.

Since its founding in 1983 by Darina Allen, not only fruits and vegetables are grown in Ballymaloe but diverse cooking and catering courses are also offered, as the participants from around the world see. Because only in Ballymaloe do horticulturally skilful cultivation and perfect culinary use go hand in hand in this intense form. Only here can you see a group of white-robed chefs streaking through the gardens in search of the most plump and ripe vegetables and fruit.

But aesthetics matters too: The design and variety of gardens are an aesthetic experience and inspiration for any garden lover. In the ornamental orchard, spring flowering shorten the time of waiting for the numerous berries and espalier fruit (including peaches and apricots). The kitchen garden, too, with its many old vegetable varieties and the hedged herb garden combine utility and design standards in a magnificent way. And they are just some of the garden sites, which include a water garden, a small landscape park, a maze, a double-sided perennial garden, and other ornamental gardens.

For the jury members it was this whole experience and the high standards of the Ballymaloe Cookery School that ultimately made the difference for the award. In addition, it was perhaps the fact that such a successful international “Garden of Eden with a cooking school” was not found in France or Italy, but in “rough Ireland”.

External link to the website of Ballymaloe Cookery School. 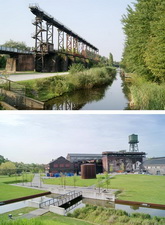 The jury of the European Garden Award is convinced that the Emscher Landscape Park made landscape architecture and urban development of outstanding quality possible with the “predecessor” IBA Emscher Park and continues to support it and is also of importance for the successful economic, environmental and social structural change in the region.

In particular, it is the mixture of various measures, ranging from spectacular projects such as the Landscape Park Duisburg Nord, to the conservation and enhancement of the relicts of the industrial heritage, to the many projects in the working and living environment that made the Emscher Landscape Park this year’s winner. All the more so because it combines a compelling and highly attractive and effective overall concept. With the changes in its biggest problem zone, the entire Ruhr region has gained ecological quality, created new residential and recreational quality, and also gradually achieved the economic successes that the IBA initiated in 1989 with the concept “Working in the park”.

Unlike many places in Europe, for Emscher Landscape Park it was never about removing all traces of industrial history, but the targeted valorisation of its resources and the preservation of selected architectural structures. Parks were therefore created at many locations which are and will remain unique in this form. The landscape architecture and urban and regional planning has been able to tap stockpiles and ennoble with “Haldenkunst” (art on the top of the stockpiles), develop greenway connections with often extravagant bridges, create new parks around relics of industrial culture – as a kind of modern Follies – and put a large, but forgotten island in the centre of the next envisaged major project (IGA 2027).

The jury particularly emphasised the exemplary cooperation of the many participating municipalities, counties and associations, the continuation and sustainability of the Emscher Landscape Park, and the leadership of the regional managing association, the Regionalverband Ruhr.

The Emscher Landscape Park initiated and nurtured changes in consciousness of the regional population of the values and diversity of their region and positive impact on the image and external perception of the region. But – according to the jury – also many renowned follow-up projects, such as the Night of Industrial Heritage, the Ruhr Triennale, and the Emscherkunst, which are internationally known and have inspired similar projects, owe their success to Emscher Landscape Park.

By giving the European Garden Award of the European Garden Network EGHN and the Schloss Dyck Foundation in the category “Large-scale green development concepts” to the Emscher Landscape Park, the international jury wants to celebrate diversity and durability of the concept and the high quality of each individual part. The prize is also a reminder that the new qualities of the Emscher region and the Ruhr metropolis, which are now often seen as “commonplace” and used as a matter of course, have a long history that is testament to the visions, commitment, and staying power of many figures and the residents of the region.

The jury wishes the Emscher Landscape Park continued good development and success in the bid to host the International Horticultural Exposition 2027 (and its implementation).

External link to the website of “Metropole Ruhr”, section on “Emscher Landschaftspark”.

Photographs taken at the awarding ceremony and a selection of pictures showing the awarded sites can be selected as downloads from this page.

The European Garden Award is supported by: