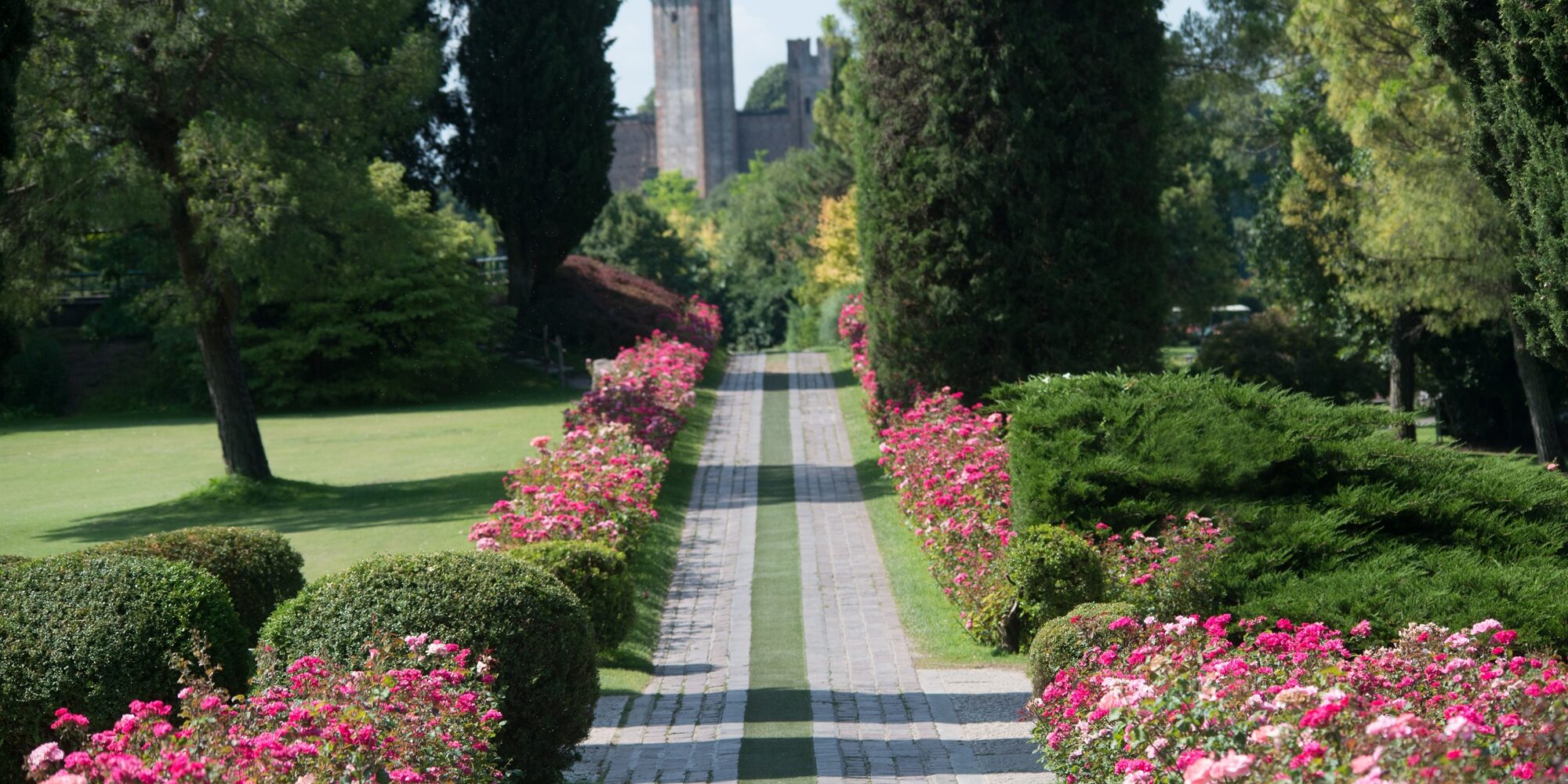 Parco Giardino Sigurtà is a green treasury close to Lake Garda and just a few kilometres from the cities of Verona and Mantua. The park sits astride two hills and is home to many points of interest.

The seasonal flowering, such as that known as “Tulipanomania”, a spectacle of over a million of tulips, 30,000 roses along the Avenue of the Roses and hundreds of brightly coloured water lilies; the Maze, a winding path among 1500 yews over an area of 2500 square metres, the Great Lawn, the largest in the Park, upon which stands a bronze statue of Dr Sigurtà who founded the gardens, and two ornamental Flowering Lakes. Not forgetting the Hermitage, in neo-Gothic style, and the Castelletto, which in the past was a notable meeting place for scientists and Nobel winners, guests of the Sigurtà family, and the Educational Farm, an area of fun and learning for young visitors and a place to meet many delightful animals.

The park sits astride two hills and is home to many points of interest.

The flowering tulips event “Tulipanomania” has become a must-visit show in the spring for nature lovers, for green-fingered gardeners, and for all those who know the park and do not want to miss the always-surprising spectacle of colour which is renewed afresh year on year in the months of March and April.

In particular the floating tulip beds, about 300 of them, have made “Tulipanomania” a unique exhibition known all over the world. The beds dance on the Water Gardens and the Flowering Lakes, making the impulse to take photographs quite irresistible! The Flowerbed Avenue is home to over 50 brightly coloured beds and finally there is the spectacle of the tulips that frame the area of the Hermitage.

But also those visitors that come for the first time to this richest flowering of tulips in Italy and all of southern Europe cannot fail to be won over by the spectacle. Fabulous flowerbeds with carefully designed colour combinations, a Guinness record breaking walk through a kilometre of tonal patterns spreading through the park’s woods and lawns. The shapes, tones and perfumes of more than a million tulips, together with those of the narcissus, hyacinths, muscari, and fritillaries create unforgettable floral patterns made up of hundreds of varieties. The Narcissus Sigurtà (of which there are four varieties) is registered with Sigurtà family name.

The Avenue of the Roses is certainly another feature, which has done much to contribute to the Sigurtà Garden Park being known all around the world. In the spring, along its kilometre length, there bloom more than 30,000 highly selected “Queen Elizabeth” and “Hybrid Polyantha & Floribunda roses”.

The Water Gardens evoke the canvasses of the impressionists. The reflection of the Castello Scaligero in the water is particular inspiring, shimmering among the delicately floating local and exotically tropical water lilies.

The horizontal sun dial “Romeo and Juliet” is characterised by a symbol in the form of a geometrical figure electronically carved into the dial. The elements that make it up, the circumference, the 64 hyperbolic curves, the 32 points and the circle, are a symbolic and figurative representation of the “sun as the source of life”.

After six years of hard work, in the summer of 2011, the Maze was opened. The original plan was created by Giuseppe Sigurtà, in co-operation with Adrian Fisher, who is one of the best-known maze designers worldwide. This “green” work is made up of 1.500 yews that create a path which wanders around an area of 2,500 square meters. At its heart there rises a tower inspired by the one in the Bois de Boulogne in Paris. It allows visitors to appreciate the geometry of this special point of interest in the garden as well as the fine views of the Water Gardens and the Great Oak.

The Great Lawn is the most extensive feature of the whole park. In the middle of this soft green carpet are the Flowering Lakes, surrounded by a romantic weeping willow and annual plants that are grow there in the different seasons. The water itself is home to the enchanting water lilies and water hibiscus. Beneath the surface dart the lively Japanese koi carps whose colours pick out those of the water lilies.

Hidden in the park is a small area where the Sigurtà family decided to grow around 40 different plants with special therapeutic properties: The Medicinal Herbs Garden. At the centre is the statue of a lion, by the sculptor Giuseppe Brigoni (1901-1960).

The Great Oak is one of the best loved attractions for visitors to the park. With an age of more than four centuries, it is one of the oldest trees in the park. It is rightly regarded as a particularly fine example with its 6-metres round trunk in perfect proportion to its 120 metres circumference crown that covers an area of about a thousand square meters.

The park includes an impressive collection of „Ars Topiaria“. With 40,000 buxus plants the park is among the world’s greatest collections. The topiaries can be found at many places of the gardens.  Nowadays the gardeners have restricted themselves to caressing the crowns of the box to hew the most unusual and bizarre forms.

The Educational Farm is an area of fun and learning for young visitors and a place to meet many delightful animals.

Important buildings in the park include the Hermitage, in neo-Gothic style, and the Castelletto, which was in the past a notable meeting place for scientists and Nobel winners, guests of the Sigurtà family.

In the 40 years after its re-opening to the public, the park with its long history, with 600,000 square metres of woods and lawns, and enchanting seasonal flowering has received a number of awards, such as in 2013 the prize as Italy’s most beautiful Park and in 2015 a 2nd Prize of the European Garden Award for its perfect restoration and development.

History of the park

Gerolamo Nicolò Contarini purchased some agricultural land within a walled area. There was already a small Italian style garden nearby and it was there that Contarini had his villa built.

The Guarienti family, owners of the estate from 1436, began to enlarge the existing garden, making an amenable place for the delight of guests visiting the villa.

The Maffei family obtained water-drawing rights from the nearby river Mincio for irrigation purposes, the result of an application made by Count Antonio Canonico Maffei in 1699.

The poet Ippolito Pindemonte visited his uncle the Marquis Antonio Maffei as a guest: from this meeting the vision of the romantic English style garden came about and then, at the beginning of the nineteenth century, they had the neo-Gothic temple (now called the Hermitage), the Castelletto and the Grotto all built on the estate.

The Maffei dynasty came to an end and the property began its decline in the hands of the Nuvoloni family.

Franz Joseph I of Austria and Napoleon III of France were guests of the Nuvoloni family at the meeting for the signing of the armistice that ended the Second Italian War of Independence.

Finding himself in Valeggio for the purchase of a horse-drawn carriage, the Milanese pharmaceutical entrepreneur Carlo Sigurtà bought this large landed property on impulse.

19th March 1978 was a sunny day when Carlo Sigurtà opened the gardens to the public. The first visitors entered the park in a party atmosphere of expectation.

The Horizontal Meridian was made to a design that will ensure its accuracy for 26.000 years.

The Maze was inaugurated: the botanical attraction consists of 1,500 yew trees that lead the visitor along paths over an area of 2.500 square meters. In the same year the Park wins the award of “Grandi Giardini Italiani”.

The Garden won the coveted prize “Italy’s most beautiful Park”.

The Garden Park was awarded a 2nd Prize by the European Garden Award.

“Tulipanomania”, the flowering of over a million tulips has been adjudged the “Most Beautiful Flower Display in Italy” and as an event of world importance by Parksmania Awards.

Castelletto and the famous guests

At the end of the eighteenth century it was the Marquis Antonio Maffei who started the creation of the Castelletto and of the Hermitage.

Originally called the Nina’s Castelletto, it is one of the most important historical monuments of the Sigurtà Garden Park. In the past it was used as the armoury but today it is the custodian of literary memories, including through its collection of “Lo Smeraldo” magazines which Eugenio Montale worked on, as well as of the scientific memories of the Sigurtà family.

It is interesting to reflect that numerous scientists and Nobel prize winners have often been guests in past decades at the garden, as remembered by the plaque on the outside of the building. These include Gerhard Domagk (Nobel Prize winner in 1939 and discoverer of the sulphonamides), Alexander Fleming (Nobel Prize 1945, who discovered Penicillin), Selman A. Waksman (Nobel Prize 1952 for Streptomycin), Konrad Lorenz (Nobel Prize 1973 and founder of ethology) and Albert B. Sabin (discoverer of the oral poliomyelitis vaccine).

Opening times: from first days of March to first days of November
Guided tours: special ticket for a group of minimum 25 persons and guided visit (compulsory reservation): € 4,00 adults – € 4 children
Tourism information: is near Peschiera del Garda (8 km)
Shop: inside the Park
Museum: no

Restaurant/Café:
The park has several refreshment bars around its 60-hectare area.
All of these sell cool drinks, tasty snacks, panini, focaccias, mini-pizzas, fine ice-cream and excellent coffee in a pleasant and regenerating atmosphere.
Close to the Iris bar, near the entry gates, there is also an ice cream parlour open for visitors on the warmest days.
Around these bars there are specially equipped picnic areas that are also suitable places for eating your packed lunches.

Toilet: 6 toilets in the park.

Plant labelling: at the most important plants

Accessibility and mobility aids: Sigurtà Garden Park is a natural paradise that is accessible to everyone. It is a place with no architectural barriers and many different ways of visiting it along the 20 kilometres of porphyry paths.

We remind you that seriously disabled visitors have free access when they present their medical certificate to the ticket office, while their companion will pay the reduced entrance charge of Euro 10,50.

Guests with mobility difficulties can use a special reserved area on the panorama trains. These places are equipped with a special electric platform which enables those in wheelchairs to enjoy the tour along the Enchanted Way. The panorama train will take you round the park and provide a voice guide explaining the most interesting points on the itinerary.
Inside the park there are three toilets that are equipped for the disabled. These are located along the main routes.

For safety reasons it is not permitted for disabled guests with mobility problems to use the golf carts. This is because they are not structurally designed to ensure them a comfortable and safe ride. The golf carts do however have an audio-GPS system that guides visitors around the special points of interest in the park.

Programme for children, playground: events and the The Didactic Farm

Donkeys, goats, chickens, turkeys and ducks all await you at the ancient farm in the Park, a fun and educational area for children and families. The Didactic Farm in the Park is a member of the group working on the project for the conservation and breeding of poultry local to the Veneto region, in collaboration with the Veneto Agriculture Association.

Regulations concerning dogs: Unfortunatly we cannot permit dogs to enter, with the exception of guide-dogs for the sight-impaired. To help out dog owners who would like to visit us, we have a special arrangement with two nearby kennels (subject to availability at the kennels). You should contact the Dog Resort (www.dogresort.it) or The Custode delle Muraglie (www.ilcustodedellemuraglie.it).