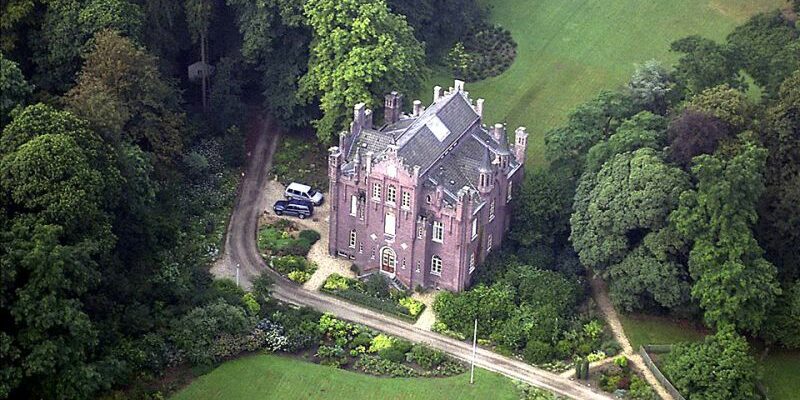 Aerwinkel Castle was built in 1854 by Dutch architect Pierre Cuijpers on commission from Pierre Geradts.

The romantic, neo-Gothic castle lies at the heart of a beautiful English landscape garden – probably also designed by Cuijpers – between the town of Posterholt and the village of ‘t Reutje.

The garden borders on a wood called “Munnichsbos” and is thus surrounded by nature on all sides.

Surrounded by old chestnut, beech and oak trees, the main house can be found at the centre of two large expanses of lawn. The present owners planted a large number of outstanding shrubs and trees here in 1997. The wealth of species in this park – more than 500 different shrubs and trees – is unique in the south of the Netherlands and can also be regarded as an arboretum.

Countless rhododendrons blossom in spring while autumn offers visitors a true “Indian summer” thanks to the splendid colours of the beeches and chestnut trees.

In any season Aerwinkel is a beautiful tranquil spot crisscrossed by newly-created walking trails. At the same time, amphibians in the pond and free-roaming domestic animals (alpacas, ponies and hens) add life to the estate.

A long driveway winds its way through the English garden laid out in 1850 and leads up to the small castle and the auxiliary buildings behind it. This is the location of the café terrace, where visitors can ordercoffee, tea and small snacks during opening times.

A second, older avenue does not lead directly past the house but straight to the auxiliary buildings and the small café. The centuries-old chestnut trees along this avenue were already part of the French Baroque garden which was located behind the former castle farmyard. The “Sisters of Divine Provenance”, who were members of the monastic order originating in France and who lived on Aerwinkel estate from 1956 to 1986, had the farmyard demolished and a chapel and auxiliary buildings made of timber erected in its place. Today, these can be hired for events.

It cannot be said with certainty who designed the English landscape garden, but it is generally assumed that the design came from architect Pierre Cuijpers, who also built Aerwinkel Castle. The Rijksmuseum and the main railway station in Amsterdam are among Cuijpers’ most famous buildings. There is only one other castle with a garden likewise designed by Pierre Cuijpers (a good fifty years later) – Schloss Haarzuilen.

It is recorded that the design of the park at Aerwinkel was inspired by the garden at de Pettelaar country estate, which was designed by landscape architect Zocher.

A particularly noteworthy feature of the gardens at Aerwinkel Castle is also the fact that the trees and shrubs were planted during three different periods: 1750-1800, 1850-1870 and 1995-1998. Today, groups of trees alternate with splendid colourful herbaceous beds and twenty-year-old trees and shrubs to form a harmonious whole. Large groups of rhododendrons and azaleas have been planted above all along the driveway and the meadows to the rear. The garden at Aerwinkel can be characterised as a “woodland garden” when seen together with the wood, where many rhododendrons also flower.

A beautiful fallen false acacia (Robinia pseudoacacia) has a special charm of its own, still surprising visitors with splendid blossoms at eye level even though it has been lying on the ground for fifty years. This special tree has been a popular backdrop for wedding photos for decades. 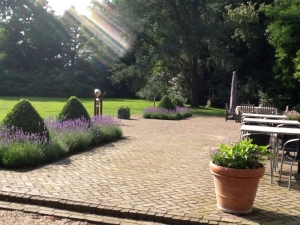 Guides tours: Each Thursday upon advance reservation (house and park)