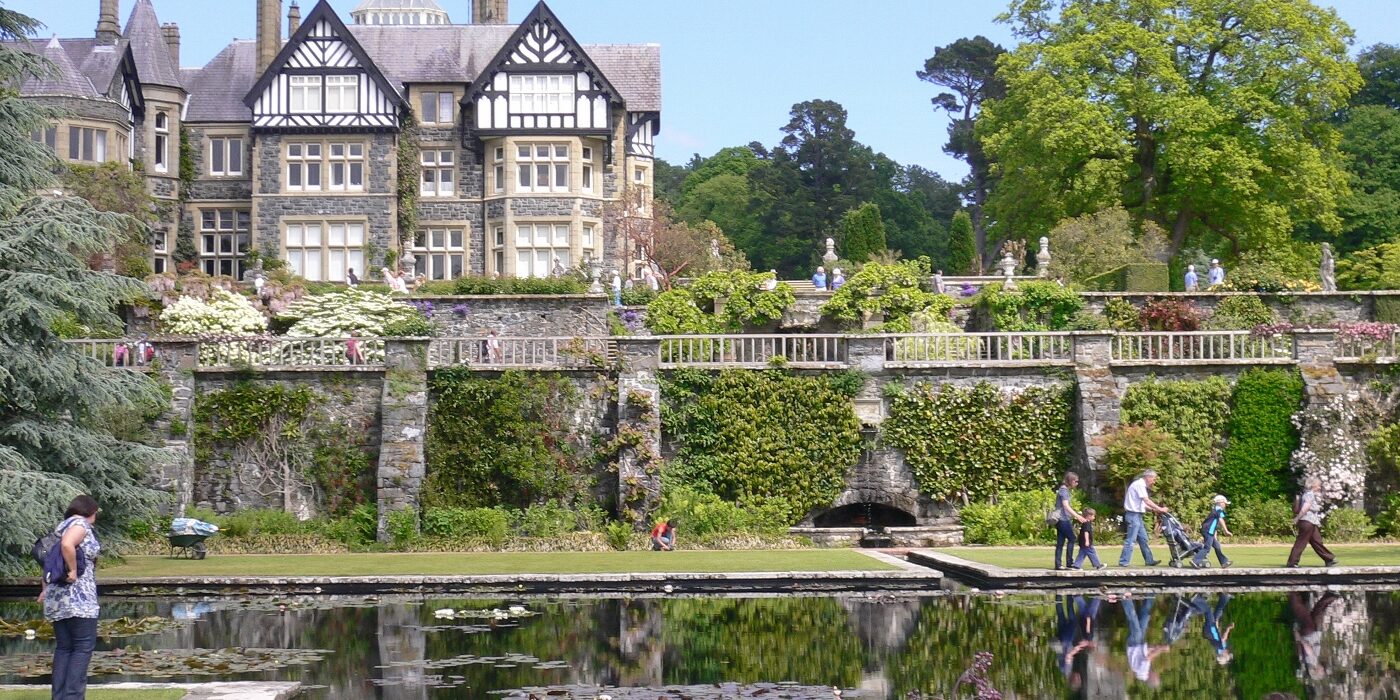 This beautiful garden is one of the most popular in North Wales. Situated not far from Conwy, on the North Wales coast, this hillside garden allows spectacular views over towards the Welsh mountains. The garden is divided into two quite distinct parts, one much more formally planted than the other. Near to the Hall, a number of beautifully planted and ordered gardens and terraces are interlinked, with planting downhill towards ‘The Dell’ decidedly more wild and informal.

A particular favourite of the gardeners at Bodnant has been the mass planting of many varieties of Rhododendron, some unique to Bodnant which reflect the opinion of the 2nd Lord Aberconway. He believed that these plants, which grew so successfully at Bodnant, should be cultivated en masse, and when in bloom, these flowers form a sea of colour throughout Bodnant.

The gardens at Bodnant have much to offer. Perfect for games of hide and seek, picnics, and simply admiring the landscaping, the gardens are popular with people of all ages. For the more horticulturally minded, the Bodnant Garden Centre offers a vast array of different plants and trees.

Bodnant Garden is one of the most famous garden sites in the region. Its vast expanse covers around 80 acres of land above the River Conwy, with its location creating spectacular views to the west towards Snowdonia. The gardens themselves occupy two equally impressive but heavily contrasting genres. Nearer to the house are located the formal Terrace Gardens, along with less formal lawn areas. Down the hill, below the terraces, is “The Dell”- a landscape that one would perhaps associate more with Victorian notions of the picturesque. This section of the garden is much more wild and rugged compared to the terraces located upslope, and has the River Hiraethlyn, one of the River Conwy’s tributaries, running along the valley.

The gardens have developed over generations of Aberconways. It was the belief of the 2nd Lord Aberconway, Henry, that plants that grew well in the gardens at Bodnant should be planted extensively. This is particularly evident through the widespread planting of Rhododendrons of multiple varieties, although prior to 1905, only the common mauve R. ponticum was present in the garden. Also planted in number are Camellia x williamsii camellias. In late May the magnificent Chilean fire tree Embothrium coccineum var. lanceolatum is in flower, and its bright scarlet flowers are spectacular. Indeed, the garden is equally superb throughout the year, with horticultural gems in all seasons. There are also many unusual plants in the gardens, such as the Magnolia wilsonii and the Viburnum bodnantense ‘Dawn’ A.M.

From the entrance to the garden, a broad path leads to the East Garden, with beds planted as a mixed border of summer-flowering herbaceous perennials, with a selection of shrubs on the wall behind, such as Clematis armandii. There is a small circular pool located in the garden, which is surrounded by Potentilla ‘Elizabeth’ which flowers during the summer months. Turning left out of the garden along a formal path lined with young Cypress trees brings you to The Front Lawn, located below the Southern front of the house. A statue of Priapus, God of garden fertility, is located towards the corner of the house. From here, the garden leads onto The Upper Rose Terrace which offers magnificent vistas across the landscape towards the River Conwy and Snowdonia. Below the Rose Terrace is The Croquet Terrace, accessed by steps that part to go down either side of a Baroque French fountain. The shelter provided by the top wall means that an array of fine shrubs are able to grow here. Numerous species ensure that the garden has many beautiful features all year round.

The North Garden is accessed from either the Rose Terrace or the Croquet Terrace. It has a variety of trees and shrubs, including two impressive conifers Athrotaxis selginoides and Cupressus sempervirens. The adjacent Lily Terrace was designed around two cedars, planted in 1875 on either side of the pond that constitutes the main feature of the terrace.

Two more flights of stairs bring the visitor down to The Pergola and to the Lower Rose Terrace, with the Pergola at each side leading to The Canal Terrace below, with its beautiful pin mill at its south end. Originally built in Woodchester in Gloucestershire in the 1730s, it was rescued and brought to Bodnant in 1938, where it was refurbished and now overlooks the spectacular ponds of the Canal Terrace.

Walking down from The Canal Terrace, the landscape undergoes a metamorphosis from the ordered plantings of the terraces to the varied landscapes of “The Dell” below. A row of magnolia borders leads down the hill, and at the end is a splendid flour-mill designed in 1827 attuned to a formal classical Italian style. The landscape in this part of the gardens is very much in contrast with the gardens near the house. A much more rugged and disordered scenery, it lends itself more comfortably to original notions of the picturesque.

Many winding paths leading up the hill towards the house are lined with rhododendrons, azaleas, magnolias and other shrubs, providing bursts of colour throughout the seasons. Along the valley from the mill are a spectacular waterfall and a bridge over the dam, which provide views both up and down stream. Upward from the Mill Pond are the Shrub Borders and the Round Garden, both providing superb views along ‘The Dell’. From here, the garden leads back up to the Top Lawn near to the house.

These beautiful gardens of many seasons are well worth a visit. Both informal and formal aspects of the planting are equally spectacular, and boast many spectacular views of the mountainous Welsh landscape beyond.

The Hall at Bodnant was, until recently, the home of Lord Charles Aberconway. Following his death in 2003, Lord Aberconway’s son, Michael McLaren has taken over duty of the Hall. The house has been the property of the family for generations, purchased by inventor Henry Davis Pochin in 1874 after he had made his fortune. Originally a mere apprentice specialising in industrial chemistry in Manchester, Henry became the proprietor of the business when his partner died, and helped further the North-West china clay and soap industries with his inventions. The original house was built in 1792, and was of typical Georgian design. Pochin, however, made various alterations and extensions, facing the building with blue granite and yellow sandstone and covered in Pyracantha coccinea ‘Lalandei’

Although there is no public access to the house, its magnificence is there for all to see simply from its exterior. Rising above the East Garden and Front Lawn, it complements the spectacular surrounding landscape. 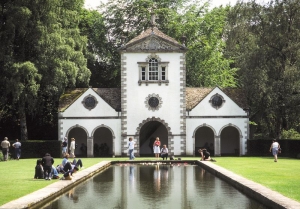 Facilities:
Pavilion Tea Room with adjoining confectionary kiosk located in the car park. Magnolia Tearoom and Dell Kiosk.
Toilets located behind the tea room. There are no toilets in the garden itself.

Accessibility:
Wheelchair access is possible, although steep areas of the gardens can be problematic. Free loan of wheelchairs. Access to Pavilion Tea Rooms and toilets. Braille guide book available on free loan.

How to get there:
The A55 Expressway gives easy access to Bodnant Garden from the North West, Midlands and Cheshire areas. Bodnant Garden is clearly signposted from the Expressway, West of Colwyn Bay. Exit at junction 19.

Links to own or relevant homepages: https://www.nationaltrust.org.uk/bodnant-garden