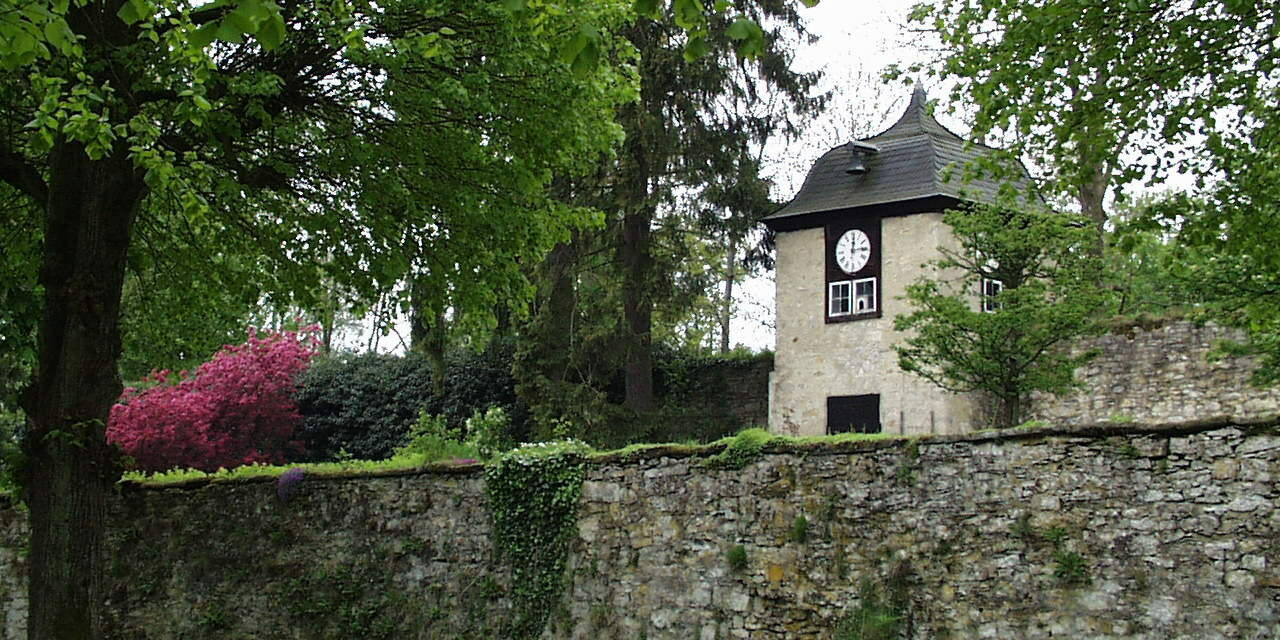 Dalheim is one of the few former monasteries in the northern region of Germany where the visitor can still get an impression of the complete baroque complex. After a chequered history, it served as an Augustinian monastery from 1429 onwards. It was abolished in 1803 as part of the trend of secularisation. An oil painting from 1739 gives an idea of the gardens at their height in the Baroque period.

The “Eichkamp” can be seen in the painting to the west of the monastery wall. This was used during the monastery period for fattening pigs. One of the core pieces of the complex is the abbot garden, which is still used as a private kitchen and ornamental garden today.

The monastery garden is located on the southern side of the monastery. This originally had several terraces linked to each other by steps and two fountains as points of focus. As a result of archaeological excavations, it was possible to identify not only the fountains but also parts of the former supporting walls and stairwells.

Since 1979 the complex has been in the possession of the Landscape Association of Westphalia-Lippe, which is currently converting it into a Westphalian Monastery Museum. The monastery garden will be restored in this context.

Set in a charming landscape, Dalheim is one of the few former monasteries in the northern region of Germany where the visitor can get a good impression of a complete Baroque ensemble. The abbey is surrounded by a wall almost one-metre wide and 1030 metres long.

Dalheim was first mentioned in 1264 as an Augustinian convent, but was abandoned in the 14th century following raids and pillaging. In 1429 Augustinian monks, from the neighbouring monastery of Böddeken, became the abbey’s new residents. In 1803 the monastery was secularised and both the church and monastery buildings were put to new use as agricultural buildings. In 1979 the Landschaftsverband Westfalen-Lippe acquired the former monastery, which is currently being converted into a Westphalian monastery museum.

The oldest buildings, erected between 1460 and 1475 are the late-Gothic abbey church and the monastery building with its four wings and a cloister. In the late 17th and throughout the 18th century, Dalheim experienced its greatest period of economic and cultural prosperity. Between 1708 and 1730, under Abbot Bartholdus Schonlau, a total of 23 new buildings were constructed, which are distinguished by their dimensions and solid construction. Almost all of them have survived. The radical Baroque remodelling makes the complex one of the most beautiful in the Paderborn region.

Little evidence of the numerous monastery gardens remains today. However, an oil painting of 1739, which depicts the ideal state of the whole Baroque ensemble, gives an idea of how the gardens would have looked. The abbot’s garden and the convent garden together form the heart of the impressive complex. The long abbot’s garden is located on a terrace on higher ground. The flowerbeds were laid out on either side of a central path and were bordered by boxwood, with shaped trees accentuating the corners. Potted plants sensitive to frost were brought into the orangery for the winter. The orangery still survives on the northern side of the garden. In the summer it was used as a summer-house and concert hall. A further feature of the abbot’s garden is the small summer-house which is integrated into the monastery wall. The abbot’s garden has survived to the present day as a private kitchen and ornamental garden.

The Monastery Garden, which was reserved for the monks and guests, took up the southern part of the walled monastery. Several terraces were linked to each other by a long central axis and accompanying outer paths with ramps and steps. Attractions included the round fountain in the central area and the square fountain in the lower area. Optical completion of the monastery garden to the east was provided by two “mirror lakes”, in which it was intended that the buildings and park should be reflected. Archaeological excavations have shown that extensive remains of the former supporting walls, steps and fountains survive beneath the surface. Careful renovation of the monastery garden based on historical models is planned with the intention of giving future visitors a long lasting impression of the garden history of the monastery.

One of the other gardens is the herb garden near the hospital. The medicinal herb garden, which was created in 2002, reflects the state of knowledge of monastery medicine in the Baroque period. The steward’s garden behind the northern domestic buildings served for the provision of fruit and vegetables; in 1886 80 apple, pear and plum trees stood here. The oak field (“Eichkamp”) in front of the monastery wall originally consisted of oak trees planted regularly in rows and was used for fattening pigs, as a source of timber and for protection from the weather. A large proportion of the present stock of trees still originates from the monastery period.

Paths Through the Landscape

The isolated location, hidden in the Piepenbach valley, appears idyllic. For the nuns who originally settled here around 1200, solitude meant concentration on prayer but also resulted in a difficult life with many raids, with pillaging and burning so that they finally felt forced to abandon their convent. At the beginning of the 15th century Augustinian canons founded the monastery and in the 18th century the complex was considered to be one of the richest and finest in northern Germany, with its core from the late Middle Ages, its Baroque buildings and its broad square of domains. Today the complex is once again receiving careful attention.

The literature and music programme here above all recalls great women who, like Hildegard von Bingen or Mechthild von Magdeburg, saw it as the individual’s obligation to use moderation and reverence when dealing with all things. No part of creation – whether animals, plants, herbs or stones – was too small to be disregarded. The sensory and spiritual aspects of deep mystical experiences are expressed in language as are past and present forms of loneliness, solitude and hermitage. In their readings and concerts, Eva Mattes, Hannelore Hoger, Juliane Köhler, the Harp Consort, the Kuss-Quartett and the Michael-Riessler Trio conveyed the modernity and credibility as well as the linguistic and musical strength of the Middle Ages and the Baroque. In their dance theatre “Amarillis, my love”, Verena Weiss and Joel Frederiksen showed the various faces of the loving woman, thereby making reference to the iconography of Renaissance paintings. And Thomas Kling, David Malouf, Oswald Egger and Assia Djebar built a bridge to the present with their poetry and stories.

When temporary exhibitions are on show, admission prices may increase – see website.

Guided tours for groups and schools in English on request

Shop: yes, during opening times of museum
WC: at main entrance and within the museum building
Restaurant: yes
Parking: Free parking – 5 minutes walk to main entrance
Seats, benches: yes
Average visiting duration: 3 hours
Accessibility: due to the historic structures not all sections of the ground and the monastery are fully accessible. A 10 minutes (unsheltered) walk is required from parking area to the museum. Adapted WCs are available at the main entrance and restaurant.

Information flyer available at the museum.
Information panels on site
Plants within the medicinal garden and convent garden are labelled

How to get there by car: From Paderborn/Warburg follow B68 until Lichtenau, at the junction follow “Westheim/Dalheim”
BAB 33/A 44: BAB 33 from Bielefeld, exit Wünnenberg-Haaren follow direction Kassel (A 44), exit Marsberg/ Meerhof. Follow signs to Lichtenau, after 4 km Dalheim is signposted