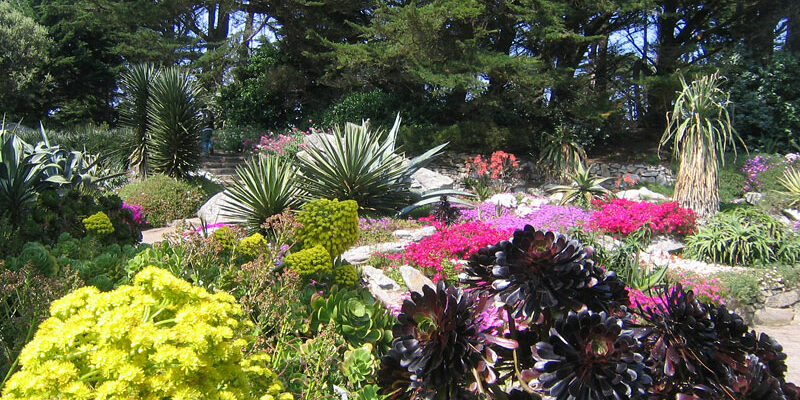 The Georges Delaselle Garden was originally created in 1897 and is home to more than 2,500 species of plants from all the continents. Located on the eastern tip of Ile de Batz, this garden is a remote oasis on a large area of rock buffeted by the winds.

The garden covers 2.5 hectares and is characterised by two different landscapes separated by a 16th-century Calvary mound.

It is a picturesque and romantic labyrinth with contrasting designs, open views to the surrounding seas and dry-wall terraces. Visitors come upon many surprising areas as they make their way around the garden, ranging from the Bronze Age necropolis embedded in palm lilies (Cordyline), to the Palm Grove, an idyllic jungle dug into the sand, to the Cactus Garden with its green theatre of succulents, to the Maori Garden with its range of colours of New Zealand flax.

The Georges Delaselle Garden is:

The botanical collection in Jardin Georges Delaselle was created from 1897 onwards and comprises more than 2,500 species of plants from all over the world. More than two thirds come from the Mediterranean-type climate in the southern hemisphere. New species are added every year. The unique character of this botanical collection is its geographical location on a small island washed by the mild waters of the English Channel and yet buffeted by Atlantic storms.

A wide variety of landscapes can be found in the garden. The “Necropolis” features sweeping lawns, dragon trees and the Bronze Age burial site discovered by Georges Delaselle. The Palm Grove dug into the sand harbours the collection of subtropical plants. From the Calvary mound, the view sweeps over to the Cactus Garden, which is home to succulents and cacti. A range of colours of New Zealand flax (Phormium) are revealed in the Maori Garden. The west terrace, which is planted with various flowering bulbs, continues towards the Austral Territories at the centre of garden, where plant collections from Australia and New Zealand are to be found. The plant world of dunes is shown in the Grass Garden, which also offers a long view across the garden to the Flowering Moor covered with sea pinks (Armeria). From here, a garden window opens southwards onto the sea and towards the continent.

Garden History
Georges Delaselle, an insurance agent from Paris, was enthralled by the island of Batz and its exotic vegetation on a trip here in 1897. Overwhelmed by the variety of rare and exotic plants from all over the world which had once been brought to the island by seafarers, he decided to create a Mediterranean garden.

Between 1897 and 1918, Delaselle arranged for the construction of artificial dunes to protect his garden from the wind and storms as well as for the excavation of a 5-metre-deep water basin with terraced sides. A necropolis dating from the Bronze Age was uncovered during this work.

In 1918, Delaselle settled permanently on the island and devoted himself exclusively to the development of his garden. On his death in 1944, he left behind a lush oasis of palms and exotic plants. Various subsequent owners left the garden to its own devices and it gradually became forgotten. It was not until 1987 that the former paradise was rediscovered. A group of engaged garden lovers came together to found the “Les Amis du Jardin Georges Delaselle” association and worked to have the garden revived. The Office of Coastal Protection acquired the property 100 years after Delaselle had bought it, thereby securing the existence of this remarkable testimony to the period of practical botany and the acclimatisation of exotic plant species around the year 1900.