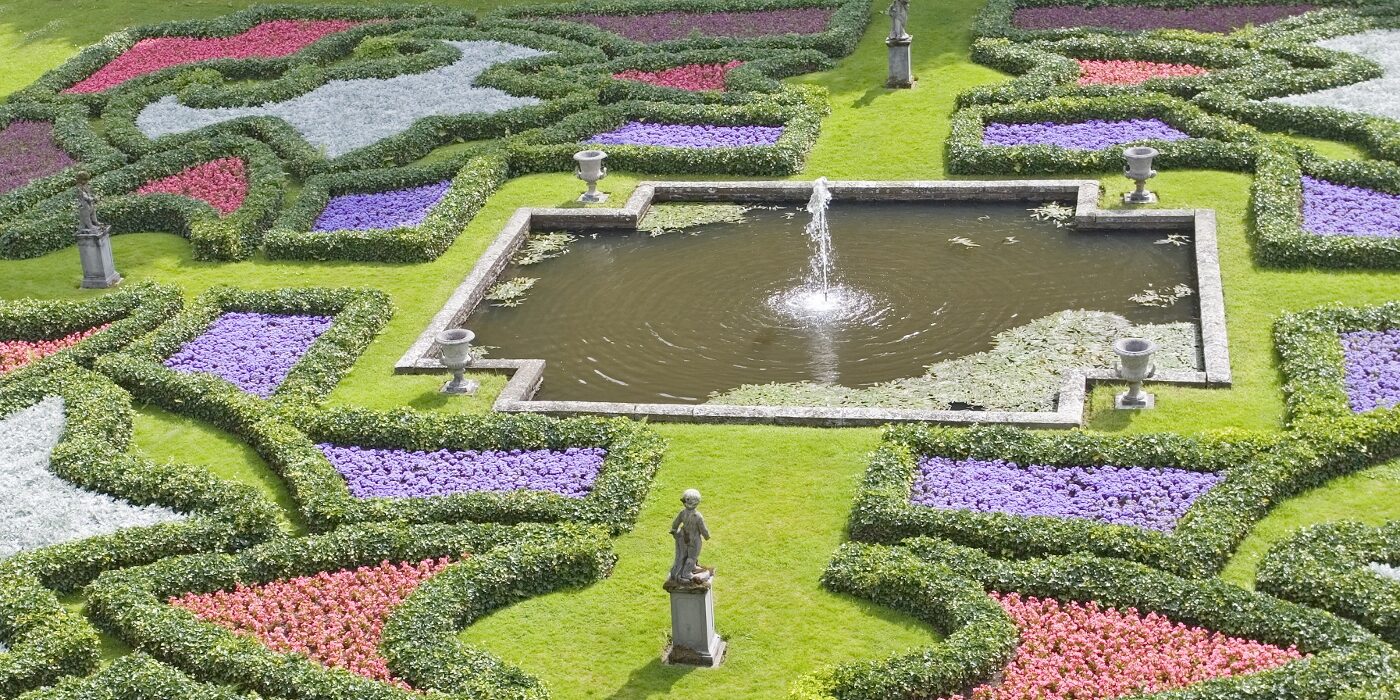 Lyme Park is fine parkland approximately 560 hectares in size with ornate gardens and commanding views of the Cheshire Plains. It is a medieval deer-park with an imposing stone mansion which has been the ancestral home of the Legh Family for over 600 years. The area is high moorland, with ridges and valleys, on the western edge of the Peak District.

The land was acquired by the Legh Family in 1398. The original Tudor House, built in the 16th Century, was transformed into a huge Italinate Palace in the 18th Century. It now contains much fine furniture bought around this time. Lewis Wyatt, the well known architect remodelled the house in the 19th Century creating the ornate interior seen today.

The gardens first began to be created in the 17th Century. They include a lime avenue, the Dutch Garden with cherubs representing each of the 4 elements, and an Orangery containing plants over 170 years old. The parkland itself has fallow deer. The ghost of a lady in white is said to haunt the grounds while the Long Gallery is known as the Ghost Room. More recently Lyme Park was the setting of the 1995 BBC adaptation of Pride and Prejudice (a novel by Jane Austen).

With adventure playgrounds, picnic tables, and a restaurant Lyme Park is equipped for all visitors and offers something a little different to other gardens in the area.

Lyme Park is fine parkland with ornate gardens and commanding views of the Cheshire Plains. At the centre of the large estate (approximately 560 hectares in size), which is essentially a medieval deer-park is an imposing stone mansion which has been the ancestral home of the Legh Family for over 600 years. There is a range of gardens at Lyme Park constructed over time.

The area is high moorland on the western edge of the Peak District which is one of the most valuable landscapes in the United Kingdom in the east of Cheshire. The landform is dominated by ridges and deep-sided valleys and is quite different from most of Cheshire.

The land was acquired by the Legh Family in 1398 and became the principle seat of the family in the mid 16th Century when the core of the present house was built by Sir Piers Legh VII. The original Tudor House was transformed into a huge Italinate Palace in the 18th Century. The Venetian architect Giacomo Leoni built a 15 bay palladian, spacious internal areas and a magnificent Italian style courtyard. Much of the fine furniture seen in the house today was bought by Peter Legh VIII towards the end of the century to decorate these new rooms. Thomas Legh was an intrepid explorer whose journey through Egypt and up the Nile in 1816 brought him fame and fortune. He commissioned Lewis Wyatt, the well known architect from the 18th and 19th Century to remodel the house and he was responsible for some internal alterations to the library, dining room, and other rooms of the house. The Grand Staircase and Bright Gallery have been restored and the Long Gallery stretches the length of the north façade. The Saloon is felt to be the best example of his work with a rococo ceiling and Grinling Gibons carved wood decorations.

The gardens first began to be created in the 17th Century. Parts of the deer park around the hall began to be landscaped and a scheme of formal avenues and vistas were laid out. There are approximately 7 hectares of highly formal gardens to contrast the high and wild parkland beyond. To the south of the Hall is a gentle slope running down to the stone-edged South Lake with an island of shrubbery in the middle. There is a short cascade in the centre of the south side. To the far side is the start of a lime avenue dating to approximately 1670, which carries the eye uphill and across the parkland.

To the west is an area of semi-circular stone bench seats with views across the park and the Dutch Garden. William John Legh was responsible for this. He became the first Lord Newton in 1892. Laid out in 1860, originally as an Italian Garden, it is bounded by a 4m stone wall and evergreen planting at the base of the walls. The garden is quartered with each quarter having a cherub representing the 4 elements (fire, earth, air, water). Lewis Wyatt was also responsible for the Orangery to the east of the hall. It is an 11 bay gritstone ashlar building. The Orangery contains a 90-year-old fig tree and 2 rare, and as yet unidentified, Camellias thought to be over 170 years old.

The parkland itself has fallow deer reintroduced in the 1990s. The deer are descended from the original red deer when the park was first enclosed by Piers Legh I. It is defined by a 9 mile drystone wall dating to the 16th Century. The Cage stands on high ground within the parkland. It was built in 1737 and replaced an earlier structure. It has panoramic views north to the Pennines and west across the Cheshire Plain to Wales. It is currently under restoration but was used for watching the hunt and for banquets.

The Legh Family has been the main influence on the development of Lyme Park. Sir Piers Legh fought and died during the French wars at Agincourt. He is buried beneath a hill known as The Knight’s Lowe. Although married, he was loved by a French lady called Blanche who died of grief soon after Sir Piers’ funeral. Her body was found near the River Bollin in a meadow now known as Lady’s Grave. Since then a ghostly funeral procession has been reported winding its way toward the Lowe, followed by a lady in white.

In the house there have also been reports of a lady dressed in white also and the sound of distant bells pealing at night. In the Long Gallery, once known as the Ghost Room, a skeleton was discovered in a small secret chamber in the floor. It is said to belong to a priest hiding from religious persecution during the times of religious upheaval in the 16th Century.

A more recent association with Lyme Park is Jane Austen. The 1995 BBC adaptation of Pride and Prejudice was filmed at the park. The Forsyth Saga was also filmed here.

Today Lyme Park is cared for by the National Trust. There are excellent facilities on site. Guided tours around the house and park operate on some days and include a 1910 costume tour and a housekeeper and butler tour. There are shops and a restaurant for visitors’ enjoyment. If the weather is good then there are picnic tables and an adventure playground available for the children and off-road cycling. The site also caters for school groups. 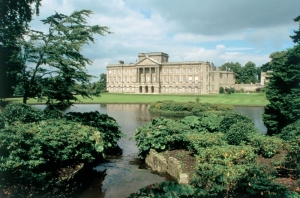 Owner/manager: Lyme Park is owned and managed by the NT and partly financed by Stockport Metropolitan Borough Council

Accessibility:
Disabled Separate parking. Enquire at admissions kiosk. Minibus (with small step) from main car park to house on days house is open. There is a drop off point nearby. Disabled facilities available. Grounds partly accessible, steep slopes, some steps

How to get there: