You are here:
GardensSurreyUnited Kingdom 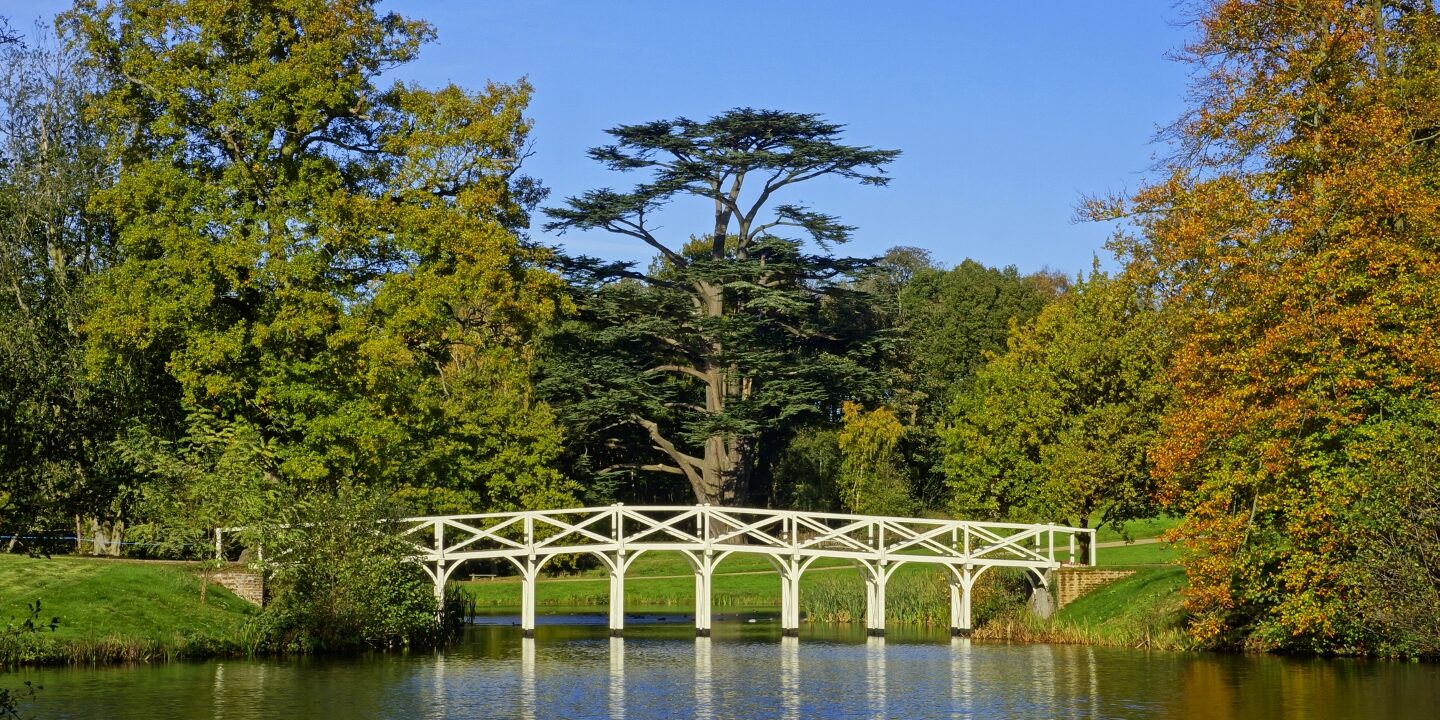 Painshill Park is an 18th century landscape, designed by the Honourable Charles Hamilton between 1738 and 1773. Inspired by a number of Grand Tours of the continent, Hamilton purchased an area of barren heathland and transformed it into a work of art.

A lake was created and a circular walk designed around the park incorporating views of garden follies that gave the visitor experiences of different moods. The beauty of the Chinese bridge contrasts with the spectacle of the grotto and the sombre air at the mausoleum. Other buildings include the gothic temple and tower, the waterwheel, the hermitage and the Turkish tent. Planting around the park enhanced the views of the structures and was ground breaking in that seed from newly discovered trees and shrubs had only just arrived from America.

After falling into decay in the 20th century, the Painshill Park Trust was set up with the prime objects of accurately restoring the landscape and its garden buildings and opening the park to the public. Almost all the buildings have now been rebuilt and the site also has a modern visitor centre, incorporating a café and gift shop. The 70ha site is open throughout the year so it is possible to enjoy the landscape in all types of weather and in all seasons.

The site was part of Henry VIII’s Honour of Hampton Court that was disparked in 1548 when Crown leases were granted to tenants and the Painshill area was divided into three farms. In 1738 Charles Hamilton acquired the farms from William Bellamy, a successful barrister. The previous incumbent was the Marquis du Quesne, who had lost a fortune in the collapse of the South Sea Bubble and it was probably he who built the house near Portsmouth Road which was occupied by Hamilton.

Hamilton was born in Dublin in 1704, the ninth son and youngest of fourteen children of James, the sixth Earl of Abercorn. After studying at Oxford, where he became a lifelong friend of Henry Fox, Hamilton visited Europe on at least two occasions for the Grand Tour. In 1738 he began to acquire land in Cobham, where he took over the Crown leases of the three farms as well as purchasing additional land giving a total of c 80ha.

Hamilton proceeded to create a garden containing a series of living pictures, designed to provoke moods and sensations, with sudden changes of scenery interspersed with architectural features and variations in colour by the careful mixing and placing of foliage. Hamilton was always short of money, which led to a series of business ventures which included a vineyard and a brick and tile works at Painshill. In 1748 John Bartram, the first American born plant collector sends by sea to English subscribers, boxes of seeds collected in the wilds of eastern North America. Hamilton received a five-guinea box of these mystery seeds, a number of which he propagated and grew on at Painshill. His contemporaries respected his knowledge of plants and he supplied seeds to nurseries.

By 1773 he was forced to sell Painshill as he was being pressed by Henry Fox and Henry Hoare (of Hoares Bank) for the repayment of loans and he retired to Bath where he died in 1786. The site was acquired by Benjamin Bond Hopkins, who built a new mansion completed in 1778. Even when the house was complete, Hopkins spent little time at Painshill as in 1777 he had acquired Wimbledon House, where he laid out a park with a lake, grotto, and cascade. He did however continue Hamilton’s work of planting new species and also developed new features in the landscape.

After Hopkins’ death, Painshill had a number of owners, including William Cooper, High Sheriff of Surrey, who employed Decimus Burton to make alterations to Painshill House. He employed the firm of Bramah to build a suspension bridge over Portsmouth Road and to replace with a more modern version Hamilton’s Water Wheel which raised water from the River Mole to the lake at Painshill. The owners until the Second World War were the Combes, responsible for rockeries on the site of Hamilton’s vineyard and the removal of the columns from the Temple of Bacchus to grace the portico of Painshill House. The site was requisitioned for the Canadian Army during the war, and afterwards purchased by the Baroness de Veauce, who converted the House and outbuildings into private dwellings which were sold off. The park was also split into lots and sold for various uses, including forestry and agriculture.

In 1975 a group of Cobham residents formed the friends of Painshill, and together with the Garden History Society and the Georgian Group brought pressure to bear on the local authority (Elmbridge Borough Council) to purchase the site. By 1980, some 62ha of the pleasure grounds had been acquired, and the Painshill Park Trust set up with the object of restoring the eighteenth century landscape to its former glory. The Trust has researched and restored the park and its buildings to the highest standards, winning the Europa Nostra Award in 1998. Now only the Temple of Bacchus, the Five-arch Bridge, the Palladian south bank bridge, and the Boat House and the later Bath House still wait to be rebuilt. The area of the park owned by the Trust is open to the public while the House and remaining parkland are in divided private ownership.

Painshill Park was open to visitors during its ownership by both Hamilton and Bond Hopkins. At that time visitors were usually conducted round the site by the Head gardener, a convenient way of supplementing the meagre wage paid by Hamilton. A mown strip along the northern boundary known as the ‘cabriolet road’ was designed for carriages. Visitors entered by the garden gate where they were shown the flower garden; at this point only the Gothic Tower and the Gothic Temple were visible, along with views east and south across the River Mole. Today the tour proceeds up the slopes of Wood Hill from where views of the lake and vineyard are obtained. Hamilton extended the lake southeast into the meadows below the vineyard in 1772 to flood the area previously excavated to supply his brick and tile works.

In the plantation at the top of the hill is a clearing known as the Amphitheatre, with a statue of the Rape of a Sabine Woman. The original of c.1750 was by van Nost after Giambologna. An avenue leads west to where the restored Gothic Temple frames views to the lake and the woods to the west. Paths lead down the hill to the Ruined Abbey, the site of Hamilton’s brick and tile works, and the replanted vineyard. The path then leads over the wooden Chinese Bridge to an island in the lake on which is the Grotto and an adjoining rockwork bridge. In Hamilton’s time a small Palladian bridge led southwest back to the mainland. But today it is a simple wooden bridge.

The path leads to the Roman Mausoleum which was contrived as a ruin standing near a loop in the river before turning north towards the site of the Five-arch bridge and then west to the Cascade at the west end of the lake. A brick duct runs to the Water Wheel. The western end of the site was and still is known as the ‘Alpine Wood’, with steep slopes planted with a variety of trees. At the southern edge lies the Hermitage, a primitive wooden structure and at the furthest point of the site is the four-storey Gothic Tower. Turning east the tour visited the now destroyed Temple of Bacchus, built to house a 2m statue of Bacchus which Hamilton had smuggled out of Italy and then the ornate newly restored Turkish Tent, situated on a knoll with fine views of the lake.

The path returns down the hill, past the remains of the Roman Bath House, situated by a spring fed pool near a group of cedars planted by Hamilton. There is also a fine, recently restored icehouse of c 1830 set in the hillside near the Gothic Temple. 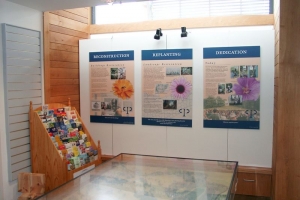 Events, exhibitions:
There is a programme of events throughout the year (see website for details)