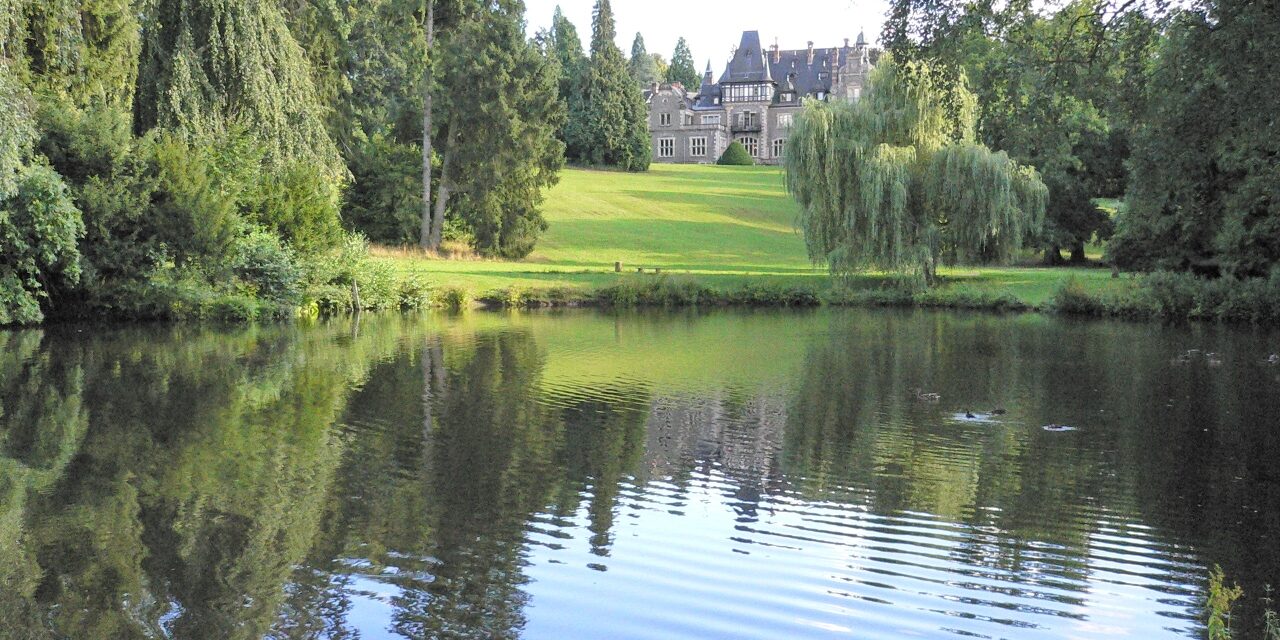 In 1873, Ferdinand Eduard Stumm (1843 – 1925) acquired a site consisting of several parcels of land at the edge of the village of Holzhausen. Over the following years, he had the area fashioned into a large-scale landscape park and an impressive castle constructed at its centre. The park was laid out along a stream valley, which was included in the concept and adapted to fit in with the ideas for the garden’s design. Fundamental elements of the garden created at that time have survived, albeit in reduced form. They give a good impression of a historicist garden from the second half of the 19th century.

The park is typical of the period when it was created, presenting itself as an apparently untouched landscape with attractive and varied garden areas and multiple vistas An extensively-branched network of paths provides access to the just over 30-hectare garden and its selected viewing points. This enables visitors to see and experience the wide variety of often exotic trees and shrubs as well as the turbulent or calm stream waters. The moods generated deliberately by the park’s design are one of the typical aims of garden style during this period.

Due to his origins in an industrial family in the Saarland, the constructor of Rauischholzhausen castle and park, Ferdinand Eduard Stumm (1843 – 1925), had enough means at his disposal to be able to fulfil the upper middle-class dream of a noble country estate. Made a Prussian baron in 1888, the widely-travelled and broadly-educated diplomat was particularly interested in work of a high standard and in implementing his own ideas. He thus selected and worked closely with prominent representatives of their respective specialist areas when the estate was being planned – Heinrich Siesmayer (1817 – 1900), a landscape architect from Frankfurt, and Carl Schäfer (1844 – 1908), who was a master architect at Marburg university.

The old moated castle of the Rau von Holzhausen family, the previous owners, was demolished and replaced by the “castle pond”, and a more elevated location on the terrain was chosen as the site for the new castle. The new building thus became the dominant focus of the park and was, moreover, further away from the village. The “picturesque” effect created by the asymmetrical group of buildings consisting of solid and half-timbered structures with high roofs and towers in a wide variety of styles is in keeping with the contemporary architectural style favoured at the time.

As was usual in historicist gardens during this period, the immediate surroundings of the manor house featured architectural and formal elements modelled on English “pleasure grounds”. A large fountain encased in stone can be found here along with steps, arbours, sculptures, trimmed yews and box hedges. An avenue of linden trees leads in a sweeping curve to the castle, starting from the park gate which separates the estate from the village at this point.

The redesigning of the existing stream valley necessitated extensive remodelling of the terrain and tree-planting on an elaborate scale. Siesmayer informs us that the “Legation Counsellor, no friend of small trees and bushes and not too fearful regarding costs either, had hundreds of large trees (oaks, firs, beeches, linden trees etc.) brought to the new estate from his forests by machine in order to give the same a finished appearance straight away.” 28,000 trees were planted over a period of four years and more were constantly added in the ensuing period. Numerous exotic and rare trees and shrubs were added as part of the endeavour typical of the period to create as large a variety and as striking a collection as possible. A tree nursery was especially established for propagating the approximately 200 species of tree, most of which can still be found in the park today. Carefully selected to create harmonious colour and shadow effects, they are distributed throughout the park in groups, as dividers or as splendid solitary trees, and are deliberately used in many places as bearers of mood and atmosphere, as “trees for the soul”.

The park’s concept included the creation of several largely self-contained areas connected by lines of sight, paths and the course of the stream. Three main routes (the west and east ring paths and the path along the Rülfbach stream) and numerous smaller paths enable visitors to take an interesting walk around the park and to seek out a large number of viewing points. These spots were often occupied by arbours or small buildings which no longer survive today. The viewing points repeatedly offer vistas of the castle, thereby emphasising its role as the centre of the park. It in turn affords a view of the village church outside the garden, a donation from castle owner Stumm in 1879 which fitted perfectly into the tradition of noble estate owners. The sculptures which are placed in many places in the park and which were brought from Italy by Stumm are also part of the system of views created in the park.

Siesmyer had already recognised the value of the stream’s course for the park’s design: “A very good impact is made here by a small stream which comes from a height, flows gracefully through the park and is linked to the small river in cascade-like form.” Dammed up to create several ponds and enhanced by the creation of waterfalls, it was used to orchestrate the atmospheric visual impact of the park in the same way as the Mühlbach, a stream which flows at a higher level above the garden.

The property was sold by its constructor‘s son in 1938/41 and passed over to the Land of Hesse in 1945. Today, it is partly used by institutes from the University of Giessen and also as a centre for conferences and further education. In the 1980s, efforts were made to rework the neglected park in keeping with the principles involved in the care of a listed garden and to recreate a close approximation of its original state. 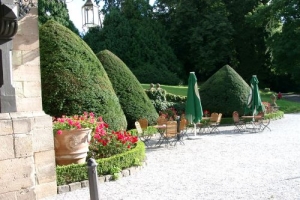