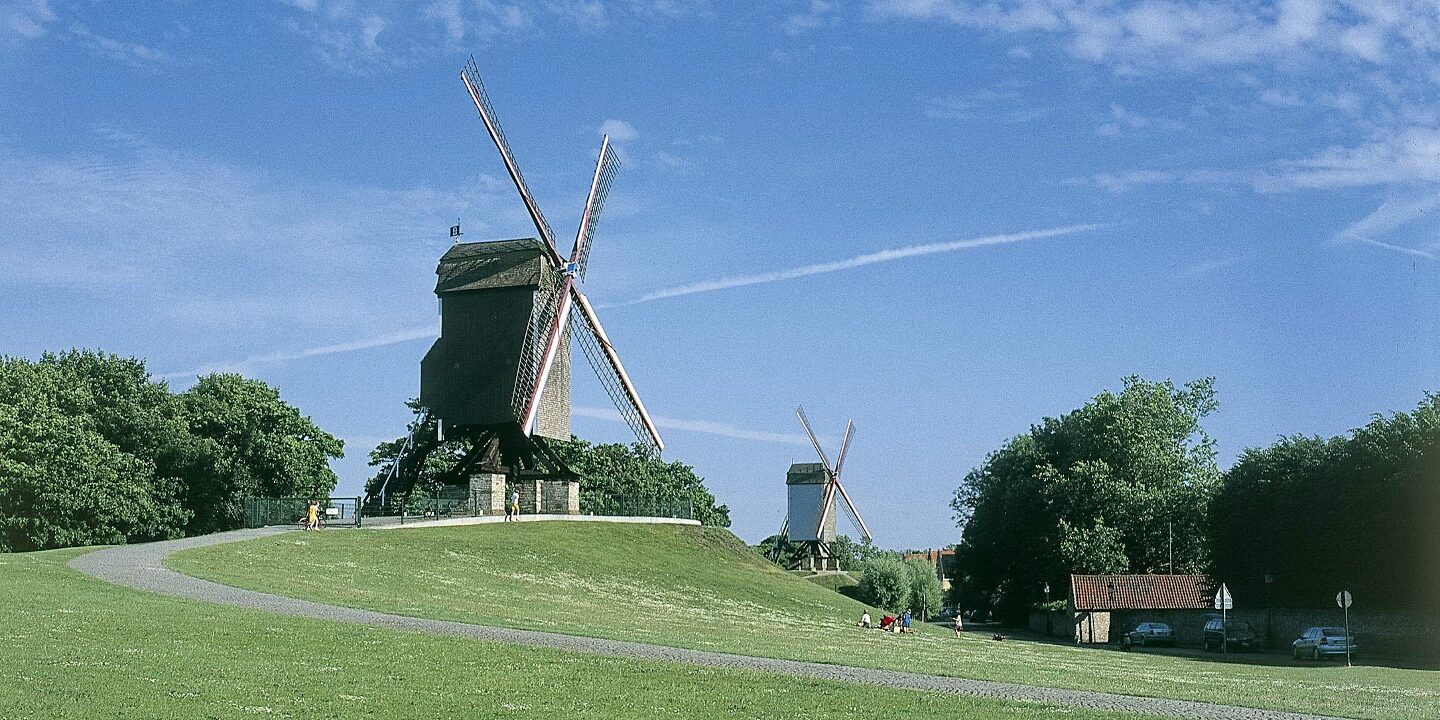 The old city centre of Bruges is almost completely enclosed by a belt of parks generally known as De Vestingen, or the ramparts. As the name suggests, it actually concerns the old ramparts of the city, which were converted into a very attractive green promenade by a number of landscape architects one and a half century ago. This green belt is more than six kilometres long, has a total surface area of 26 hectares and features lawns, bushes, walking and cycling paths and approximately 3,350 trees.

Water is also omnipresent. To the south-west of the city the original double moat has been preserved. To the east the moat has been deepened and widened into a channel for inland waterway navigation frequently used by freighters and pleasure vessels. To the south the Minnewaterpark constitutes a special urban landscape element. Only to the north-west (Koningin Elisabethlaan, Komvest) the moats were filled in at the end of the 19th century within the scope of urban expansion.

Apart from a constantly changing view and an abundance of plants and trees, people walking along the ramparts can also discover a number of monuments from the past: four medieval city gates, various lock weirs, an ancient fortification tower, an 18th-century stone arched bridge, four windmills as well as two ‘water houses’, which were responsible for the drinking water supply.

Also to be mentioned are the two modern pedestrian bridges dating from 2002, over the Coupure canal and at Kanaaleiland respectively.

The ramparts of Bruges are a park belt of over six kilometres long that almost completely encloses the old city centre. Their current ‘green’ shape dates back to the second half of the 19th century. However, their origin dates back much further: they were constructed at the end of the 13th century as city fortifications.

The fortifications of a medieval metropolis

In the course of the 12th and 13th centuries the population of Bruges increased significantly. The number of residents in the 14th century can be estimated at 40,000 to 45,000, which is a very large number for a medieval city. At that time Bruges was not only one of the larger cities but also the most important trade metropolis of North-Western Europe. The growth was also visible on site: as a result of the development of new residential areas the city had expanded considerably in a relatively short time. Construction of new city fortifications became necessary. The main reason was the conflict between the Count of Flanders and the French King, which erupted in 1297. The new fortifications had a diameter of 6,800m and consisted of an earthen wall and a double moat. Nine stone city gates provided access to the city. Originally there were no city walls; city walls would only be erected a century later, but never all around the city.

From city fortifications to fiscal barrier

During the next six centuries urban life took place completely within the cover of these fortifications. Bruges’ demographic and economic evolution stagnated or even showed a relapse, as a result of which the urban area was not extended further. In addition, the city did not find itself in critical war situations and was not besieged either in this period; consequently, the fortifications were only adjusted to the evolving siege techniques and the increasing firepower of cannons to a modest extent. Especially the outer fortification moat was reinforced with a series of small bastions and ravelins. At some places the angular course of the ditch is a remnant of that past. At the end of the 18th century the fortifications had lost all military significance. They nevertheless remained somewhat useful until the middle of the following century. Merchandise brought into the city was subject to import taxes (‘patents’) and the walls allowed efficient border control. During the day taxes were collected at the city gates and at night they were closed so as to prevent smuggling. When the patents were abolished in 1860, this function disappeared as well and nothing remained to stop the filling of the moats and the demolition of the gates.

The fortifications nevertheless did not disappear and contrary to numerous other cities they were not replaced by a wide ring boulevard. There were two main reasons. On the one hand, the residents of Bruges started to become aware of the architectural and historical value of their old city gates. For this reason the four gates that were in good condition were preserved and renovated. On the other hand, people had discovered the attractiveness of the fortifications as a walking path for some time. After the demilitarisation trees had been planted on the fortifications as well. In the middle of the 19th century the city council came up with the idea to systematically transform the fortifications into a park. The city called upon two leading landscape architects in this respect: Egidius Rosseels from Leuven and Hubert van Hulle from Ghent. The work took over a half century to complete (including several interruptions).

The construction of the park was partially made possible by the fact that the windmills were systematically demolished around this time. For centuries some 25 to 30 windmills had stood on the fortifications of Bruges. They produced the flour that was necessary to feed the dense city population. In the course of the 19th century the arrival of steam mills ensured that windmills gradually lost their function. By the end of the 19th century nearly all had disappeared from the walls. Only two mills were preserved at the Kruispoort gate for nostalgic reasons. Since 1970 two additional historical windmills have been moved from elsewhere in the province of West Flanders to Bruges, so that the Kruisvest rampart now features four mills: a unique mill landscape in Flanders!

During the construction the landscape architects gratefully made use of the proximity of water and the land topography. The old mill hills were not levelled but integrated into a wavy park landscape with constantly changing views. Especially Hubert Van Hulle, a promoter of the English landscape style, produced wonderful results in this respect.

Many of the approximately 3,350 trees to be found on the fortifications date back to this period and are now over one hundred years old. Some have reached monumental dimensions. Apart from the ‘traditional’ species such as oak, beech, lime, plane and willow, the park also features a rich collection of exotic trees such as the catalpa, the tulip tree, the pin oak, the Japanese cherry, the dawn redwood, the black locust and many others. 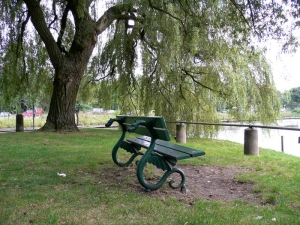 Address: Historic ramparts of Bruges:
The ramparts around Bruges have a total lengths of 7 km. A ggod place to start a walk is the Minnewaterpark. This park is close to the historic ramparts. It can be found in each map.

Opening times:
All year round