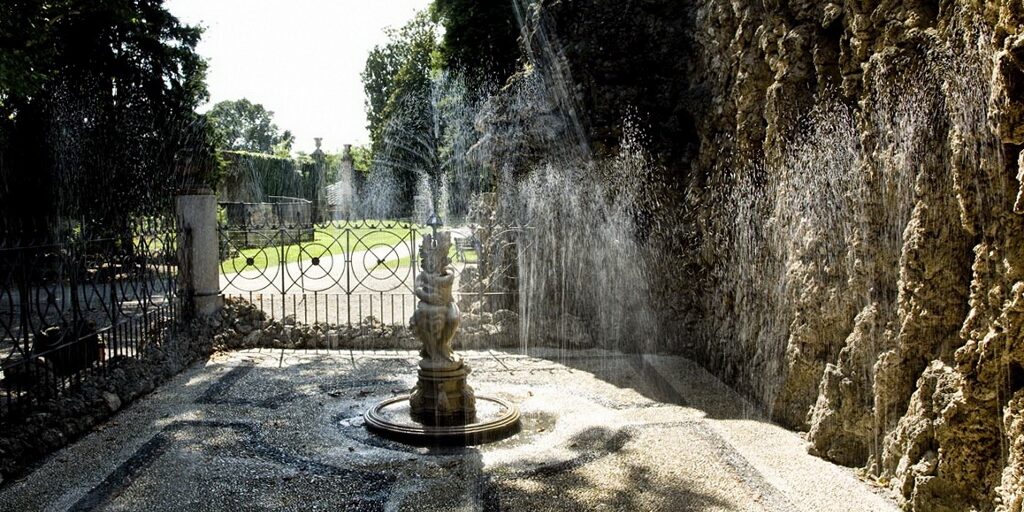 The Magic of Water

After being forgotten for many years, the gardens of Villa Borromeo Visconti Litta have recently undergone a period of restoration and now appear again as they did in the 16th – 19th centuries.

The nymphaeum, which was constructed in 1585, is situated on the main north-south axis. An enchanted world of water, sculptures and mosaics is created by the artificial grottoes with their frescoes, mosaics and 53 varying types of water features, including fountains, large and small water jets, and waterfalls. The exedra to the north forms a spectacular final point to the line of sight. Orangeries to the east and west of the exedra complete the picture on the north side of the garden.

An Italian Renaissance garden with a Galatea fountain at its centre stretches out between the nymphaeum and the exedra.

In 1808, architect Luigi Canonica collaborated with botanist Linneo Tagliabue to design an English landscape park in the northwest part of the grounds, the giant old trees of which still dominate the area today.

The restoration of the greenhouses – cast-steel structures in “art nouveau” style – has been finalised in 2017. They are located on a slightly-raised level and were originally heated by steam.

Due to its proximity to Milan, the municipality of Lainate became a favoured residential area for the nobility of Lombardy in the 16th century. Splendid summer residences were created, which provided fitting accommodation for kings, princes and artists from foreign countries on their visits to Milan.

In about 1585, Count Pirro I Visconti Borromeo (1560-1604) converted his country estate in Lainate into a prestigious summer residence. He succeeded in uniting Martino Bassi’s architecture, Francesco Brambilla and Marco Antonio Prestinari’s stonemasonry and paintings by Camillo Procaccini, Pier Francesco Mazzuccelli und Agostino Lodola into a harmonious architectural work of art. At the same time, he had a garden laid out relative to the broad north facade of the villa. This garden was characterised above all by water features.

The gardens are divided up by a double system of axes, the end points of which are accentuated by elements of garden architecture. The paths subdivide the individual gardens into four spaces, the centre of which is marked by a fountain.

The count commissioned Martino Bassi (1542-1591) to build a nymphaeum on the main south-north axis as the heart of the park. Its artificial grottoes were groundbreaking in northern Italy with their frescoes, mosaics and 53 varying types of water features, including fountains, large and small water jets and waterfalls.

The exedra at the north end forms a spectacular final point to the line of sight. Built from veined limestone, the semicircular building accommodates a terracotta statue group in a travertine-covered niche. This sculpture depicts the Rape of the Sabine Women and is a copy of the famous work by Giambologna.

The two orangeries to the east and west of the exedra complete the picture on the north side of the garden and have large south-facing doors. As described in an inventory of 1604, the orangeries once housed 156 orange and lemon trees of varying kinds in wooden or clay pots. The catalogue of plants compiled by botanist Linneo Tagliabue, which dates from 1829, shows that a wide variety of tropical plants were cultivated in three more heated buildings, among them pineapples, bananas, coffee, tamarinds, palm trees, orchids, hibiscus, gardenia, carnations and jasmine.

An Italian Renaissance garden with an imposing, multi-tiered fountain made of Candoglia marble at its centre stretches out between the nymphaeum and the exedra. Citrus fruit trees in containers and marble pots once accentuated the formal structures of this garden.

The monumental Galatea fountain (designed by Donato Carabelli) is one of a series of new additions which the Litta family implemented between 1720 and 1785. It consists of two levels connected by a flight of steps.

A 20-metre water tower with a copper tank holding seven cubic metres of water can be found on the east side of the nymphaeum. Sophisticated mechanics and 890 metres of lead piping enabled the whole system of fountains, water falls and water features to be activated. The water pump was driven by a horse. At the time, the water features were a sensational novelty in that they were powered by mechanics rather than by natural water power from a river or waterfall.

In 1808, the northwest area of the grounds was redesigned by architect Luigi Canonica l (1764-1844) and botanist Linneo Tagliabue as an English landscape park. An inventory dating from 1989 lists 820 trees of 56 different species as well as 53 woody shrubs of 15 species, among them Atlas cedar, Himalayan cedar, beech, oak, magnolia, walnut and ginkgo.

To the northwest of the villa lies the sunken “Garden of the Hesperides”, the centre of which is dominated by a Neptune fountain (Donato Carabelli). This garden was once surrounded by a high double-sided hornbeam hedge as well as two heatable, two-storey greenhouses for exotic plants – cast-steel structures in “art nouveau” style. A broad flight of steps between the greenhouses led to the shady English landscape park. The “Garden of the Hesperides” and its arbours have been restored in recent years. The next restoration project will focus on the greenhouses and steps. 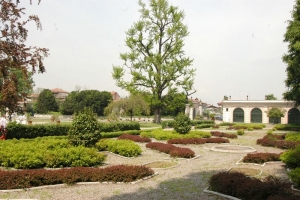 Opening days and times
from May to October

GUIDED VISITS TO THE NYMPHAEUM
MAY
Sunday and holidays from 3 pm to 6 pm.
Saturday at 3 pm and 4:30 pm.

OCTOBER
Sunday and holidays from 3 pm to 6 pm.
Saturday at 3 pm and 4:30 pm.
Visits by guided tours only.
Additional information available on www.amicivillalitta.it

Events, programme, exhibitions: Updated information on event to be found on www.amicivillalitta.it

Customer Services:
Shop: The book shop is opened during the guided tours.
Tearoom: In the villa. For details seer www.alcanevone.com
Toilets: Within the park and in the villa
Maps of the site/visitor information: Will be available soon
Seats and benches: yes
Average visitor duration: 1,5 hours
Signs in park and on plants: Will be available soon
Accessibility – in the park/ garden: The main paths in the park are fully accessible. Accessibility to the nymphaeum is currently under improvement.
Parking: In front of the main entrance, Viale delle Rimembranze and Via Mengato close to the villa.
Dogs: Dogs are not allowed.