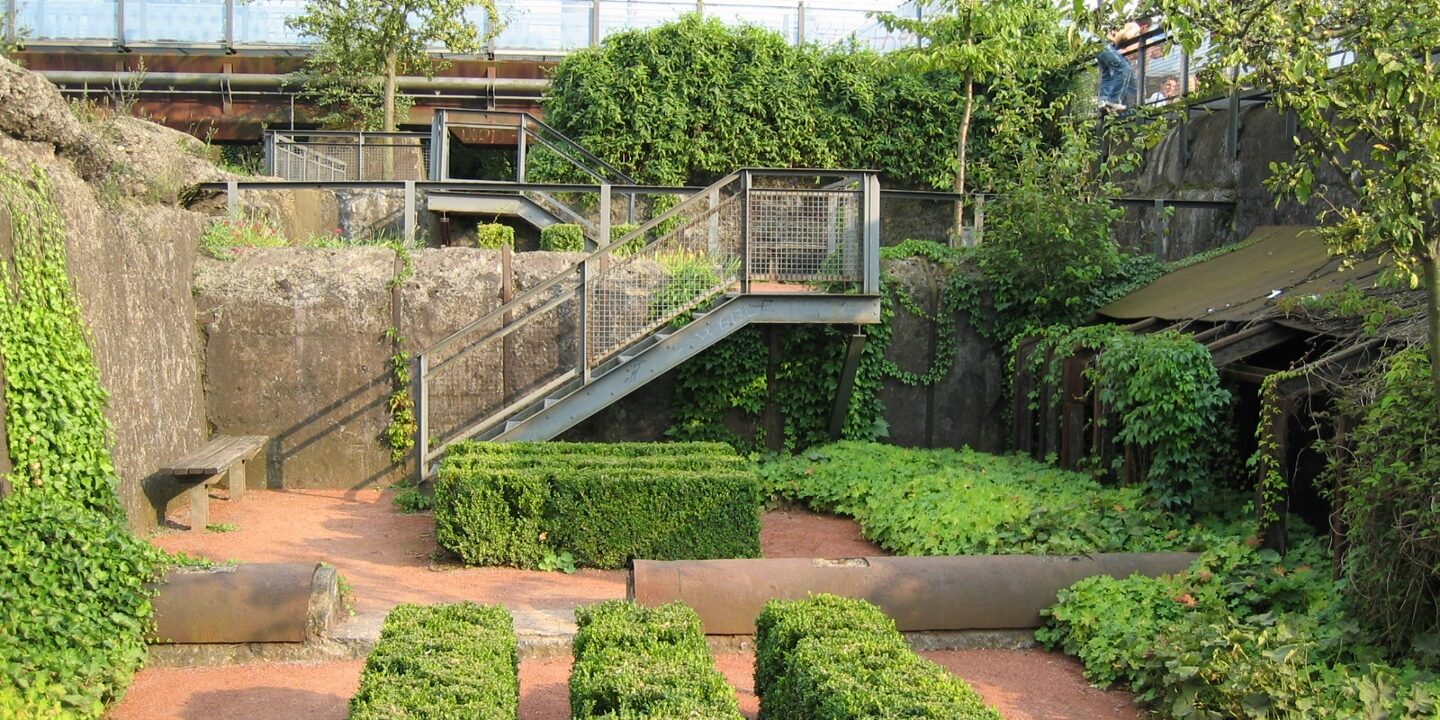 The centre of Landschaftspark Duisburg Nord is a disused blast furnace which today is a much visited industrial heritage site. Covering an area of approximately 200 hectares, the park comprises various areas of abandoned industrial sites and wastelands. The extremely diverse terrain is due to the many changes carried out to its topography, the different soil substrates, and the vegetation which has spread spontaneously on it.

One element of the park is the “Wasserpark“, which uses the Alte Emscher river system. The water is collected in open channels and old water pipes and presents a spectacular sight for the visitor.

Railway embankments of different heights structure the park into separate areas. All the areas of the park are connected by the old factory train system. They form the “Bahnpark“.

The “Vegetationskonzept“ uses the diverse natural vegetation which spread spontaneously on the area. An extraordinary variety of plants became established due to the different locations and varying conditions under which the sites became disused.

Visitors can find the “Gärten im Park“ at selected locations throughout the park. For example, the sinter bunkers in the former sinter plant were transformed into a variety of garden chambers protected and separated by concrete walls.

A farm garden was created near the old farm buildings of the Ingenhammshof.

The park’s unique appearance and atmosphere at night is the result of a specially developed light installation by Jonathan Park.

The former Meidericher Hochofenwerk, a disused blast furnace works, is located about 5 kilometres north of the city of Duisburg and is today the centre of the Duisburg-Nord landscape park. Covering an area of approximately 200 hectares, the park comprises various areas of abandoned industrial wasteland. The end of crude iron production and the closure of collieries, coking works, foundries and other similar plants stretches back over a period of forty years. The extremely diverse terrain is due to the many changes carried out to its topography, the different soil substrates, and the vegetation which has been able to spread there spontaneously. Some wooded areas are still jungle-like and one could imagine the remains of a “sunken city” beneath them.

The area lies in what were the original flats of the Alte Emscher river in Duisburg. Over 100 years ago, the Emscher meandered past various water-mills and boat-building companies here towards the Rhine.

Due to massive job losses in the steel industry in Duisburg-Rheinhausen, the then industrial area was turned into today’s landscape park, thereby functioning as a kind of ecological compensation for new commercial development.

The structures left behind by the industrial past were unearthed by Peter Latz and his team and then developed further to create the park. The structural concept of the park is based on the idea several “layers” connected at various points. From 1992 – 2003, the park was divided into various areas and developed in separate stages. The blast furnaces are the former “hot heart” of the park and formed the widely visible centre of iron and steel production.

The “Wasserpark” consists of the Alte Emscher river system and the water collection network. All the roofs and other sealed surfaces in the park – especially near the metal works – are used for water collection, as a previously installed pipe system has virtually eliminated the natural run-off flow of water. The water is collected in open channels and old pipes, and presents the visitor with a spectacular sight. The “Wasserpark” is best experienced during or after a heavy downpour.

Numerous railway tracks criss-cross the park and large parts of the northern Ruhr region, thus creating a very characteristic landscape in this area. A network of railway embankments at different heights structures the park into separate sections. All the areas of the park are connected by the old industrial train system. They form the “Bahnpark”. The raised railway tracks offer sweeping views into the countryside and the surrounding city districts.

The “Vegetationskonzept” of Duisburg-Nord is based on the diverse natural vegetation which spread spontaneously throughout the area. An unusual variety of plants became established due to the different locations and varying conditions under which the sites became disused and, of course, prior to this, plants from all over the world were imported when iron and coal were transported to the region.

Although shaped by industry for many years, most of the Landschaftspark Duisburg Nord is open landscape rather than a carefully designed park. The varied vegetation which originally spread spontaneously is to be preserved and fostered with specific measures. Visitors can thus find the “Gärten im Park“ (gardens within the park) at selected locations. This enables intensive gardening and care for the plants to be limited to small areas. The singularity of each location is brought to the fore and presented in themed gardens. For example, the sinter bunker gardens in the former sintering plant were created in garden chambers protected by concrete walls. Iron ore and coke were once baked here into round pellets. The variety of ore material from all over the world which was once stored here is reflected in the various garden designs.

The Ingenhammshof is located in a part of the park that was always used for farming rather than industry. Here, a farm garden has been created next to the old farm building. Visitors can get a sense of the pre-industrial landscape directly beside a revived meander of the Alte Emscher river.

In the area between the park and residential areas, “fore-parks” have been created. The Meiderich “fore-park” uses the old walls of the former residence for unmarried workers as a sunken play area in the middle of a natural wood of birch trees. The old tracks and paved surfaces of the former Winterstrasse freight station were also included in the structure of this part of the park.

The park’s spectacular appearance at night, particularly at weekends, is the result of Jonathan Park’s specially developed light installation in the bright colours used for the Internationale Bauausstellung Emscher Park (International Building Exhibition).

Duisburg Nord’s unique approach to dealing with the heritage and remnants of its industrial past has earned it local and international recognition just ten years after the opening of the first section of the park in 1994. The park is a very special place for all the senses and appeals to many different target groups. 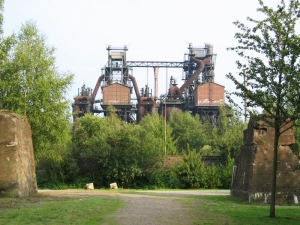 Opening Times:
The park is permanently open all year round
Visitor Centre Tour-de-Ruhr
Mondays to Thursdays 10 a.m. to 5 p.m. and
Fridays to Sundays: 10.a.m to 9 p.m.

Cultural Programme and Exhibitions:
Current information on the cultural programme can be found at: www.landschaftspark.de