Discover the charm of an inhabited castle on the Loire, halfway between Le Mans and Tours.

You can learn about castle life in Château du Lude with its beautiful terraced gardens, its historical vegetable garden, elegant salons and bustling kitchens.

Château du Lude is surrounded by several gardens, which are dominated by a large Renaissance terrace. A rose garden with Chinese roses and a boxwood maze form the “spur garden”, which is surrounded by mediaeval walls. The French garden, which was created by Edouard André in 1880, stretches out between the landscaped park with its groups of century-old trees and the course of the Loire river. Edouard André also created the romantic garden of springs and the vegetable garden with its glasshouses and orangery.

The historical gardens of Château du Lude extend over several levels between the chateau and the Loire river. They were first laid out in the 17th century. The former circular wall of the fortress served as the foundation for a large terrace which overlooks the Loire. Directly below this, there was a vegetable garden consisting of small traditional vegetable beds bordered by espalier fruit trees.

In the 18th century, the “spur garden” began to take shape due to the removal of part of the fortress. Today, the cut yew hedges follow the shape of the former fortress and enclose a boxwood maze and a rose garden, where there is a collection of Chinese roses, tea roses and hybrid tea roses such as ‘Mutabilis’, ‘Old Blush’, ‘Louis XIV’ and ‘Irène Watts’.

The landscape architect Edouard André created the ensemble in 1882 in accordance with the romantic spirit of the age. By breaking with the strict form and symmetry of the 18th century, he gave the garden new vistas and the appearance of a natural landscape, which remains to the present day.

The large terrace and its long balustrade overlook the French gardens, which are punctuated by boxwood topiaries and pools. These form a breathtaking contrast to the splendid landscape park which stretches out on the other side of the river as far as the eye can see.

A path leads to the garden of springs – a very intimate composition around a rock garden -, to a Chinese garden pavilion and a grotto. The shrubs and perennials which have graced this garden since its restoration in the nineties have given rise to a spring garden where hellebores, euphorbias, Chinese peonies, and geraniums flower in succession.

Edouard André transferred the vegetable garden from the banks of the Loire to the back of the buildings adjoining the château. The garden is laid out on three levels and its original form has been retained to the present day. It is still used by the family which owns the castle.

The first terrace has glasshouses and the beds for seedlings and young plants. It overlooks the garden with the boxwood square, which is planted with flowers and vegetables. There are collections of pumpkins, tomatoes and aromatic plants alongside traditional vegetables. Old varieties of pear and apple trees have been planted along the avenues in the shape of braids, palmettes and spindles. Although the vegetable garden is privately used, it is open to the public at the “gardeners’ weekends” and during summer events.

Château du Lude is one of the most famous castles on the Loire and is located at the intersection of the Maine, Touraine and Anjou regions in the pleasant river valley. The four large façades of the present-day castle, each of which is in a different style, make the château a rare example of the evolution of French architecture.

A tour around the castle reveals the suites with their original furniture, the Renaissance dining hall with tapestries from Flanders, the kitchens, which have been in use since the 15th century, and the remarkable “Cabinet de Peinture” with works from the school of Raphael.

Today, the château and gardens continue to play an active role in the region today. The château is very much aware of its treasures of the past and of its traditions. Various cultural events for the public are testimony to this, particularly the “gardeners’ weekend” and the major festival of spring flowers.

The theme of the year for 2005 is “the cuisine of flowers”. The outstanding cuisine of the 15th century was well-supplied with all the ingredients it needed. In a similar vein, traditional gourmet jams in all their variations will be made here from the blossoms, fruits and vegetables which are harvested from the plantations and the vegetable gardens. 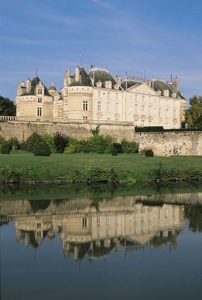