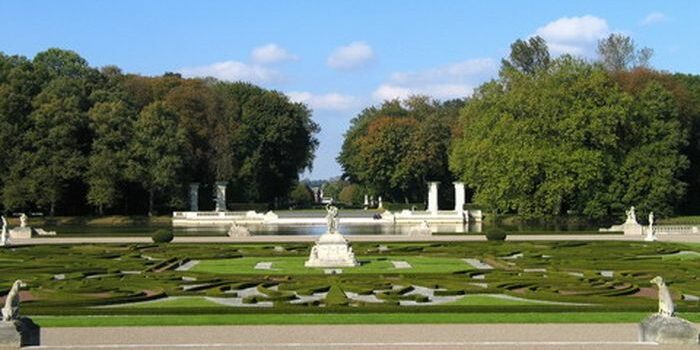 Wasserschloss Nordkirchen (Nordkirchen Palace) is regarded as the most significant grand Baroque palace and estate in Westphalia. It is not without reason that the moated ensemble dating from the early 18th century is frequently referred to as the “Westphalian Versailles”.

Both the palace and the outstanding park were created according to plans by Johann Conrad Schlaun, a master architect of the Baroque from Westphalia.

The gardens at the castle and at the “Oranienburg” were probably once among the most beautiful in Europe.
Eminent figures in European garden design contributed to the development of the park over its history. Maximilian Friedrich Weyhe redesigned some areas of the park as an English landscape garden in accordance with the spirit of the 19th century. The French garden architect Achille Duchêne, on the other hand, was responsible for a partial Baroque redesigning of the gardens.

The erstwhile splendour of the garden can still be seen today on the Venus island to the north of the palace, which features parterres de broderie and parterres de pelouse as well as shaped shrubs and sculptures. All that remains of the other, formerly great gardens such as the splendid “west garden” is their basic Baroque structure of avenues, axes, park architecture and sculptures. They are evidence of the estate’s great days of splendour.

Wasserschloss Nordkirchen (Nordkirchen Moated Palace), the most significant Baroque palace and estate in Westphalia, is located in the attractive landscape of the southern Münsterland, adjacent to the village of Nordkirchen. The palace is often referred to as the “Westphalian Versailles” due to the significance of its architectural history and grounds. It is set in a rambling park with avenues radiating out into the surrounding landscape.

Today, it is still possible to get a good sense of the former splendour of the palace and grounds. Many places in the park provide charming views of the imposing moated palace. The most impressive of these is the view from the water terrace in the “north garden” across the palace lake with its fountains and Venus island. The Venus island has been the main focus of reconstruction work in the park to date and features both parterres de broderie and parterres de pelouse, shaped shrubs and numerous sculptures.

All that remains of the other, once grand gardens such as the splendid “west garden” is their basic Baroque structure with avenues, axes, park architecture and sculptures. But these parts of the park too give the visitor an idea of the former beauty of the whole complex. Walking through the park, one constantly comes across Baroque sculptures and pillars that mark special places such as at the beginning of one of the numerous avenues. Or one comes upon the remains of transient park architecture such as the iron pergola. These are like relics, witnesses of the great days of the estate.

The basic form of the palace and park as seen today can be traced back to Prince-Bishop Friedrich Christian von Plettenberg-Lehnhausen, who made a plan in 1694 to built a palace for his family in place of the moated castle which already existed. Plans to renovate the 14th-century fortified castle were dropped in favour of a new building. The prince-bishop commissioned his court architect Gottfried Laurenz Pictorius with the planning and a first Dutch-style Baroque garden (“holländischer Stil) was created between 1704 and 1707.

In 1712, Baron Ferdinand von Plettenberg, one of the most influential figures of the Westphalian aristocracy, took over the administration of the Nordkirchen estates.

Johann Conrad Schlaun, the eminent master architect of the Baroque, made his first appearance at Schloss Nordkirchen in 1723 as a member of von Plettenberg’s retinue. Under Schlaun’s direction in the following years, the “Oranienburg” was reconstructed and newly constituted as a garden casino with a great hall, pheasantry and orangery. A western bridge was also built. The “west garden” was also enlarged considerably under Schlaun and was extended to create what must have been one of the most beautiful gardens in Europe. Schlaun had the Dutch garden covered with earth, and planted instead a classic French parterre de pelouse with a large pool and four smaller pools with fountains. The remains of the large pool can still be seen today as a small pond.

In 1727, the “petit parc” of the “west garden” was doubled in size. This part of the garden was enlarged to include numerous garden elements such as playing areas for ball games, water features and parterres de broderie. The basic structures of Schlaun’s design can still be seen here today. A comprehensive plan dating from the 1980s which sets out how the park should be cared for has set itself the goal of preserving or recreating these structures.

The park includes a wide variety of different gardens in its basic design and it was considered one of the most interesting parks in Germany after 1733. It was thus part of a canon of magnificent gardens such as those at Schloss Augustusburg (Augustusburg Palace) in Brühl, Jagdschloss Clemenswerth (Clemenswerth Hunting Lodge) in Sögel or those at the palace in Münster. All these gardens were created under the reign of the prince-bishop and elector Clemens August von Bayern, who was Ferdinand von Plettenberg’s employer. However, von Plettenberg’s sophisticated lifestyle at Nordkirchen was soon to come to an end. Following political pressure, he fled to Vienna in 1733 and died there four years later, in 1737.

It was not until the Esterházy-Galántha couple took over the estate in 1833 that alterations were carried out to the park, which had remained virtually unchanged up to that point. Changes were made in the area of the palace island and on the main axis of the palace in the “north garden” under the direction of Maximilian Friedrich Weyhe, the Royal Garden Director from Düsseldorf. These changes were consistent with the spirit of the age, when it was generally customary to replace strict “French” gardens with modern gardens in the “English” style, i.e. to create more of a landscape effect. Schlaun’s favoured “west garden” was not, however, subjected to this revised design.
Nicolaus von Esterházy, the son of the count and countess, extended the southern garden of Nordkirchen at the end of the 19th century by incorporating the park at the racetrack. Not long after this, the Duke of Arenberg bought the property in 1903. He commissioned Achille Duchêne, a garden architect from Paris, to develop plans for reintroducing Baroque design into the garden and for extending it. Essentially, the “north garden” which had been altered by von Weyhe was once again given stricter, neo-Baroque forms with parterres de broderie and numerous sculptures.

The outbreak of the First World War put an abrupt end to the plans for redesigning the palace grounds. The Duke of Arenberg went to live in Belgium and the whole estate became increasingly neglected. It was almost completely dilapidated by the time the Land of North Rhine-Westphalia took it over in 1958.

The palace and “Oranienburg” were restored in the following years for their new use as a training school for tax officials and preliminary steps were taken to reinstate the gardens. This work concentrated on the “north garden” and “east garden” as well as the palace island. 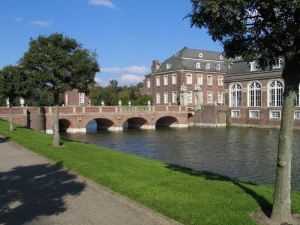 Opening times:
Open all year
Guided tours through house and chapel:
May-September: Sunday 11:00-17:00
October -April: Sunday 14:00-16.00
All other days by appointment only

Events for children and young people: no

Map of site and additional information:
• Information leaflet available at Tourist Information
• Maps at various locations within the park