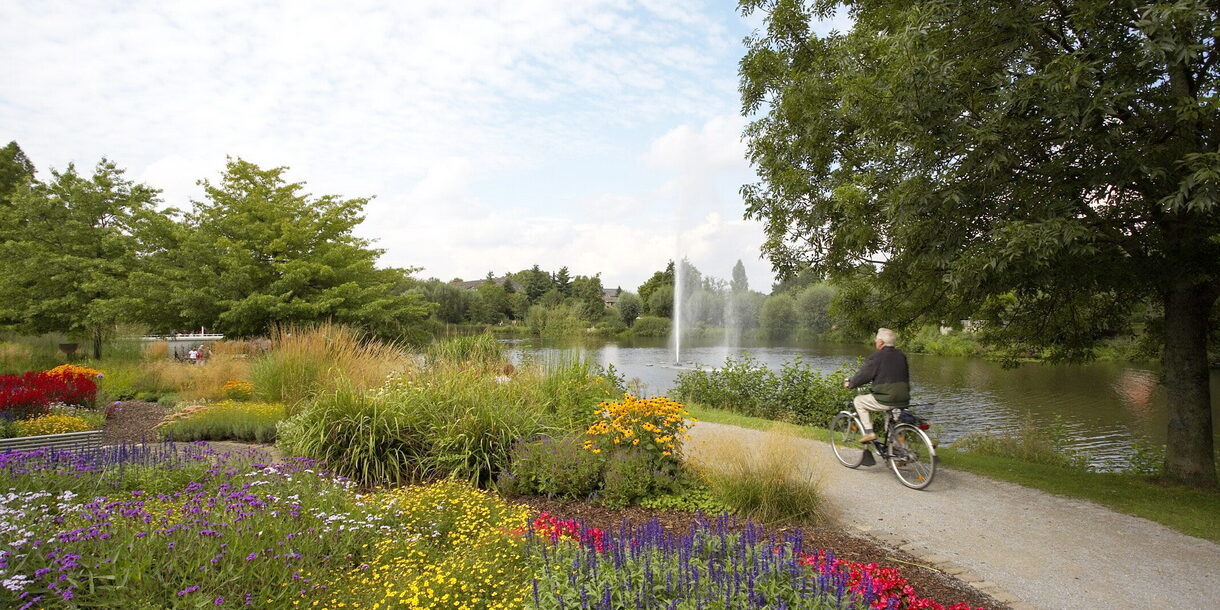 Schloss Rheda, which is one of the most significant moated castles in Westphalia, reflects architectural history from the Middle Ages to the Baroque period.

There is concrete evidence that a geometrical garden existed here as early as 1623. It was surrounded on three sides by a moat, in keeping with the typical style of the time in Holland. On the occasion of theLandesgartenschau (regional garden exhibition) in 1988, this garden was partly restored on the basis of historical plans and plants from the period such as old varieties of roses were reintroduced. The former orangery, a brick building in late-classicist architectural style, was built in 1873.

The character of the park to the north of the moated castle is like that of a designed park landscape. The term “deer meadow” indicates that a game reserve for the castle once existed here.

The “Flora Westfalica” nature and recreation park is in the centre of the town of Rheda-Wiedenbrück. In 1988, a continuous green link was created between the formerly independent towns of Rheda and Wiedenbrück. The many features for children make the 2.6 km long and 60-300 metre wide valley of the renaturalised Ems river a particularly worthwhile destination for outings.

Schloss Rheda (Rheda Castle) is one of the most significant moated castles in Westphalia. The immense castle complex is built on a sand dune on what was once marshy, low-lying ground at the Ems river. Its various parts reflect architectural history from the Middle Ages to the Baroque period. Both the impressive castle and the grounds are well worth a visit.

The castle is approached along the “Steinweg”, a path paved with old stone. The visitor’s eye is first caught by the castle garden, which is a pleasant place for a stroll. A small old half-timbered house stands to the south of the “Steinweg” on the way to the castle. This is the former Bleichhäuschen (bleaching house), which today houses a painting workshop offering courses for young and old.

The castle, which is located at the end of the Steinweg, was built in the 12th century by Widukind von Rheda in order to safeguard the crossing point at the Ems river on the long-distance route from Paderborn to Münster. The water in the circular castle moat comes from the river Ems. As is typical of many moated castles in the Münsterland, the path to the main island was protected by a forecastle on a second island. There are some domestic buildings on this island, which is located at a horseshoe bend in the Ems river. Old oak trees, beeches, chestnut trees and linden trees accentuate the picturesque effect of the complete ensemble.

Early summer is the nicest season in the park and this is when the “Spring in the Park” festival is held. Winter, however, is also an attractive season with its atmospheric scenes at the Ems weir, moat or ponds.

There are reports of a tree-garden in Rheda as far back as 1383 and of a pond known as the Kröckelteich, a name which is still used today. In the Middle Ages, tree-gardens were popular with knights and other people at the court as places for relaxation. There is concrete evidence from 1623 onwards of a geometrical garden to the north-west of the main island. This garden was surrounded on three sides by a moat, in keeping with the typical style in Holland.

Written sources from approximately 1730 indicate the existence of a Baroque “pleasure garden” with avenues and shaped trees, where fruit and vegetables were cultivated. At that time, there were more than 300 espalier fruit trees on either side of the main path. Even melons were grown here.

Between 1735 and 1825, the court was transferred almost entirely to Hohenlimburg, apart from a few short interruptions, so that it is unlikely that any large-scale investment was made in the garden at Rheda. Indeed, the garden was first tended again for those living at the castle in 1825. A nursery which sold plants was also established. By 1842, the population’s interest in flowers had become so great that the castle garden was opened to visitors.

However, it was not until the end of the 19th century that special attention was again paid to the design of the garden, when court gardener Poppe was employed especially for this purpose. He created a geometrical garden, which gave the impression of large, ornamental area if one stood at the main entrance. Unfortunately, Poppe’s death in 1902 signalled a new decline in the garden’s fortunes.

In 1966, large parts of the garden were leased to the local tennis club. The rest was given over to the town of Rheda in 1973 for use as a public green space, with the exception of the orangery garden, which continued to be maintained by the castle.

On the occasion of the “Flora Westfalica” Landesgartenschau (regional garden exhibition) in 1988, the original plans were used to “put back” the garden to the way it had been around 1900. Great care was taken to use varieties of roses from that period.

The character of the park to the north of the moated castle is like that of a designed park landscape. This area was subjected to various uses over the years. Terms such as “deer meadow” and “pheasant wood” indicate that the large woods with various deciduous trees were once home to a game reserve for the castle. There are plans to enhance the current appearance of the park using historical plans.

As far back as 1700, there was a half-timbered house which served as an orangery for collections of exotic plants. This was replaced in 1873 by a brick building in late-classicist architectural style. Concerts continue to be held here in the summer.

To the south of the Steinweg, an unobtrusive path leads to the “Flora Westfalica” nature and recreation park. It is worth taking a look at the lovingly tended kitchen garden directly to the west of the path on one’s way there. 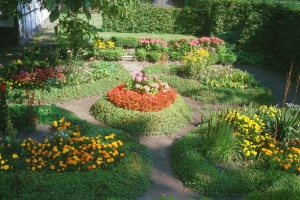 Admission Prices:
No admission fee, admission charged for some events

Cultural Programme and Exhibitions:
Current information on the cultural programme can be found at www.schloss-rheda.de

How to get there:
Approx. 10 minutes’ walk from Rheda-Wiedenbrück railway station