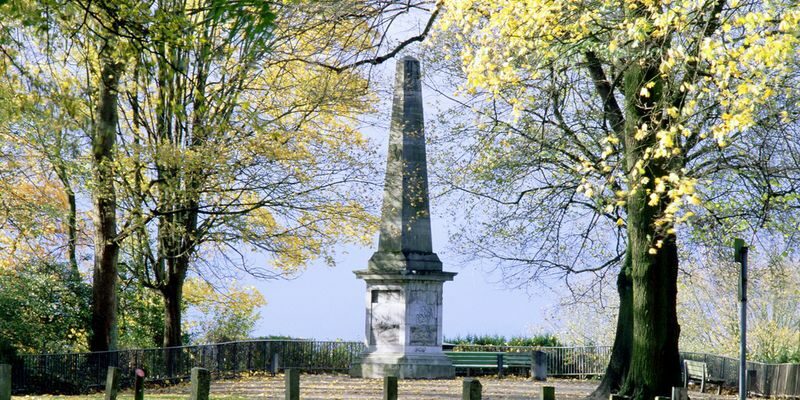 One of the first public parks in Europe to be initiated by the general public rather than by princes was created in an unusual location in 1807, on Lousberg hill. Located high above the Dreiländereck, the area where three countries meet today, the park offers a sweeping view of the town of Aachen and the border regions of the Netherlands and Belgium. The citizens’ park was realised thanks to a committee created to enhance the beauty of the town.

When the first survey to measure the Rhineland took place under Napoleonic rule in 1794, the French engineers, working under the direction of Jean Joseph Tranchot, also used the Lousberg to draw up their maps. The Tranchot obelisk, which was erected in 1807 on the top of the hill, still marks one of their measuring points.

Maximilian Friedrich Weyhe, the horticultural director from Düsseldorf, was responsible for the layout of the Lousbergpark. He designed a landscape park based on a “choreography”: lines of sight were planned in order to draw the eye to certain details or into the distance.

The Belvedere, which was destroyed during the Second World War, was created on a slope of the. Today, the remains of its pillars are a reminder of its existence.

The Monopteros, a round temple which likewise failed to survive the war, was built on the hilltop. In its place there is now a converted water tower fitted out with a rotary mechanism. Restaurant guests in the Drehturm (Rotating Tower) thus enjoy a continually changing panoramic view.

Having matured over the centuries, the Lousberg is rather like a woodland park. The avenues of beech, linden and maple trees are particularly impressive when they take on their brilliant autumn colours.

A thorough restoration of this historically significant park is planned for its anniversary in 2007.

One of the first public parks in Europe to be initiated by the general public rather than princes was created in an unusual location in 1807, on Lousberg hill. Located high above the Dreiländereck, the area where three countries meet, the park offers a sweeping view of the town of Aachen, the foothills of the Eifel region and the border regions of the Netherlands and Belgium.

The Lousberg is an unusual geological phenomenon. It is a steep-sided hill of sand with an approximately five-metre layer of limestone on its ridge, which has to date prevented it from experiencing rapid erosion.

The first plans to create a park with a “Belvedere” on the Lousberg can be traced back to the period of French rule between 1794 and 1814. As a former imperial city and as capital of the Roer département, Aachen was to be developed in appropriate style. Urban redesign began under the reign of Napoleon I, with the first large garden project consisting of the creation of public promenades on the outer city ramparts. Maximilian Friedrich Weyhe, the horticultural director from Düsseldorf, was commissioned for this work, He included the outer areas of the city at an early stage in his plans and hence also the Lousberg.

Work on transforming the Lousberg began in 1807. The aim was to turn the largely treeless, sandy area of waste ground into a wooded park. Great trouble was taken to plant conifers, notably pine trees, as pioneering plants. Beech trees were also planted on the wetter, north-east side of the hill. Over the course of time, a large variety of native trees and shrubs was planted.

The “Belvedere”, a casino with a viewing terrace, was erected on the south-east slope of the hill with the support of prosperous citizens, the “Embellishment Committee” and the town of Aachen.

A further structure from this period is the Tranchot obelisk, which was built in honour of Jean Joseph Tranchot, who carried out the first precise survey of the region. The obelisk stands on one of Tranchot’s measuring points.

After the Prussians took over rule in the Rhineland, the plans to create a town park on the Lousberg continued to be pursued. Once again, M.F. Weyhe was entrusted with the design and planning of the park. He drew up a plan which offered visitors what can truly be de-scribed as a “choreography” due to the layout and design of paths and viewing points.

Weyhe’s aim was to create an increasing sense of suspense for visitors to the park, ending in a climax and resolution with a sweeping view from the hilltop. Time and again, lines of sight revealed the various buildings in the park, most of these axes being in the area around the Monopteros, a round temple on a small artificial mound on the Lousberg plateau. This build-ing had already been planned by Jean Baptist Simar during the French period. Weyhe’s idea was that it should serve visitors as a resting and viewing point. The building was constructed in 1815/1816 and fulfilled its purpose until its destruction during the Second World War. To-day, a water tower stands in its place.

For many years the “Belvedere” was a popular destination for outings and a meeting place for the bourgeoisie and for spa visitors to Aachen. Like the Montopteros, it failed to survive the Second World War. Today, only the remains of its pillars are a reminder of its existence.

The small neighbouring hill, the Salvatorberg, and a chapel, the Salvatorkapelle, were incor-porated into the park between 1882 and 1907. At the turn of the last century, the Lousberg was placed under the control of the forestry management administration for a short time. This institution obviously wanted to give the woods a more “ordered” use and felled trees for this purpose. Complaints by citizens finally led to the town’s park management taking the area back under its care. At about the same time, the lower south-west part of the hill was devel-oped and sold to the Aachen’s upper middle classes as highly-desirable building land.

A further building, the “Kersten’scher Pavillon” was erected in the park itself in 1907. This house is the work of architect Johann Joseph Couven and was originally built on Annunti-atenbach street in 1740 for Nicolaus Mantels, a master dyer. The historically valuable build-ing was saved from destruction by the town of Aachen when it was relocated to the Lousberg at the same height as the Belvedere. Today, the pavilion is a private residence.

A road leading up to the hilltop plateau was built and the Lousberg was opened up for cars when the water tower was erected and a “rotating restaurant” opened in it at the end of the 1960s. However, extremely attractive paths for walkers still wind their way up the hill.

An extensive restoration of this historically significant park is planned for its anniversary in 2007. 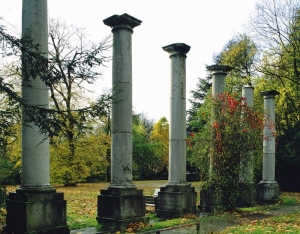 Prices:
There is no admission fee.

Cultural Programme and Exhibitions:
No

Accessibility:
The main paths are not always suitable for visitors with limited mobility due to the steep slopes.