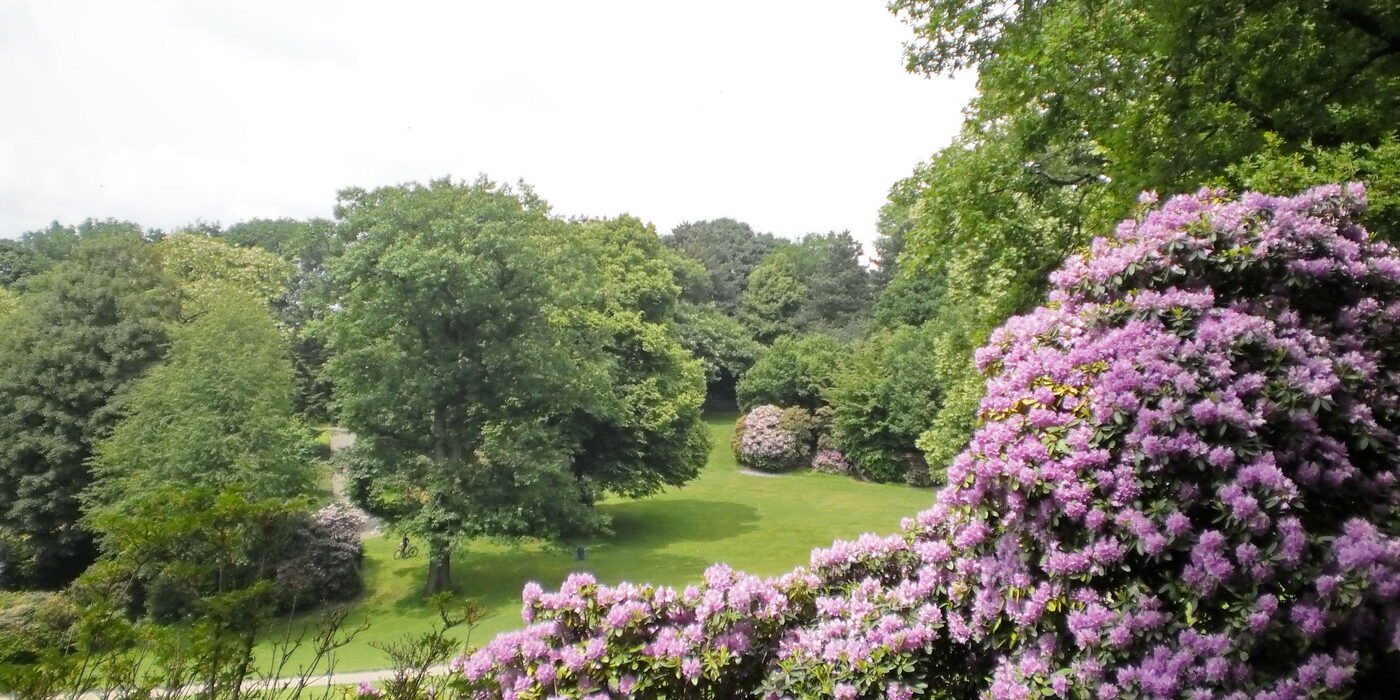 Rising up to a height of 95 metres above the Wupper river, the Hardt landscape lies between Elberfeld and Barmen, two parts of the town of Wuppertal. Visitors can enjoy beautiful views of the Hardt landscape and the densely populated townscape from all areas of the Hardt itself. The urban landscape is almost completely surrounded by higher ground covered with woods, meadows and parks, some of which continue right into the city centre.

Hardt forest, which stretches down to the Wupper river, is located on a steep slope to the east. It was laid out as a forest park by the town of Barmen and the Barmer Verschönerungsverein (“Barmen Enhancement Association”) at the end of the 19th century.

The western part of the park consists of five gardens created between 1807 and 2007, each of them in the contemporary design of the period. On the 200th anniversary of the park’s creation, the gardens were entered into Wuppertal’s inventory of monuments as listed historical gardens.

The romantic landscape garden dating from 1807 is one of the oldest gardens initiated by citizens in Germany. One of the gardens was created in 1882 by Heinrich Siesmayer, the Royal Prussian garden design director. The Botanical Garden has been in existence since 1890.

The creation of the romantic landscape garden in the old Hardt landscape was instigated in 1807 by physician Dr. Anton Diemel. It is one of the oldest gardens initiated by citizens in Germany. The landscape garden was extended until 1882 with the incorporation of an abandoned quarry in keeping with the garden’s original design. Unlike the monuments in parks and gardens created by the nobility, the monuments donated by citizens from 1817 onwards solely commemorate citizens who served the interests of the community.

In 1880, the Hardt Association commissioned Heinrich Siesmayer (1817-1900), the Royal Prussian garden design director, with the extension of Hardt park, a project which was completed in 1882. This landscape garden is dominated by large areas of grass surrounded by groups of shrubs and trees. Many viewing points in the garden offer vistas of the Elberfeld area in the valley as well as views into the landscape garden.

The Hardt mountain ridge, which forms a link to the eastern Hardt landscape, was designed in 1954 as a large landscape garden with a Bismarckturm (Bismarck tower) at its highest point. The tower affords an impressive view of large parts of Wuppertal’s urban landscape, which is threaded with green spaces. A rose garden can be found within the park.

The former municipal plant nursery was redesigned in contemporary fashion in 2007 within the context ofRegionale 2006. A central square was laid out at the main entrance to the Botanical Garden and three glasshouses were erected: a cactus house, a building to house bulbs and tubers and a hothouse for tropical and subtropical plants. The remaining area was laid out as a large park. An extra element of interest was added to the square in the form of water steps. Aesthetically designed lighting illuminates the garden atmospherically in the evenings.

Founded in 1890, the Botanical Garden was moved in 1910 to its present location in the landscape garden originally created by the Eller/Vogdt family in the early 19th century. A group of buildings surrounds the Botanical Garden at its highest point. These consist of the Elisenturm, a former mill converted into a tower in 1838, and a country house and orangery built in the 19th century (Villa Eller).The Elisenturm was designed in classical style while the country house was constructed in Neorenaissance style.

There is a circular room of great artistic merit in the Elisenturm. The walls are covered with red marble stuccowork while the dome is adorned with stucco plaster panels ornamented with floral stucco inserts. Visitors have a wonderful panoramic view over the listed historical garden from the viewing platform.

Visitors can see a wide variety of floral species from various climatic zones of the earth in the Botanical Garden. The garden’s particular topography and location on the south-facing slopes helped to give rise to its charming design. One focus of the garden consists of bulbs and tubers. The large stocks of wild cyclamens (Cyclamen coum Mil. ssp coum) and wild crocuses (Crocus tommasinianus Herb) are particularly impressive when they flower in spring.

Carnivorous plants with dynamic capturing techniques, e.g. the Venus flytrap, can be seen alongside water-retaining plants.

The newly-created medicinal and herb garden is particularly worth seeing. The medicinal plants in the raised beds are arranged and labelled according to their use for particular diseases. 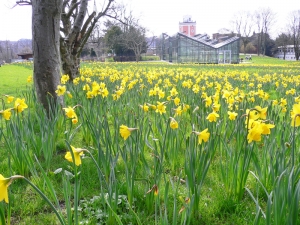 Other greenhouses are open to the public on guided tours

Guided Tours:
For guided tours on a number of themes please contact: 0202/563-4206 orbotanischergarten@stadt.wuppertal

Exhibition: on the history of the Hardt inside Elisenturm

Bismarckturm:
Reichsallee, 42285 Wuppertal. Will be opened by volunteers during nice days

Restaurant: Located in the park and Botanical Garden are “Café Elise”, “Hardtterrassen” and “Orangerie”. See www.elisenhoehe.de or contact 0202/94600730
Toilets: Close to Café Elise.
Parking: Free parking at both entrance areas “Bismarckturm” and “Botanischer Garten”.
Map and information:
A map is available for download here (by courtesy of Vangenhassend, Düsseldorf). A book on the history of the site is on sale at Café Elise. Free information leaflets can be picked up at the “Gartenzimmers” in the “Villa Eller”, Elisenhöhe 1 (close to the Elisenturm)
Plant labels: Most plants in the Botanical Garden are labelled
Benches: Yes
Average visitor duration: 2 hours

Accessibililty:
All main paths are fully accessible. Some sections can be hilly.

How to get there: (public transport)
By train to Wuppertal Hauptbahnhof (central station)
There is a direct link by bus line 643, direction shown is “Kirchliche Hochschule”
By using the Schwebebahn leave at either “Landgericht” or “Völklinger Strasse”, walk to the park