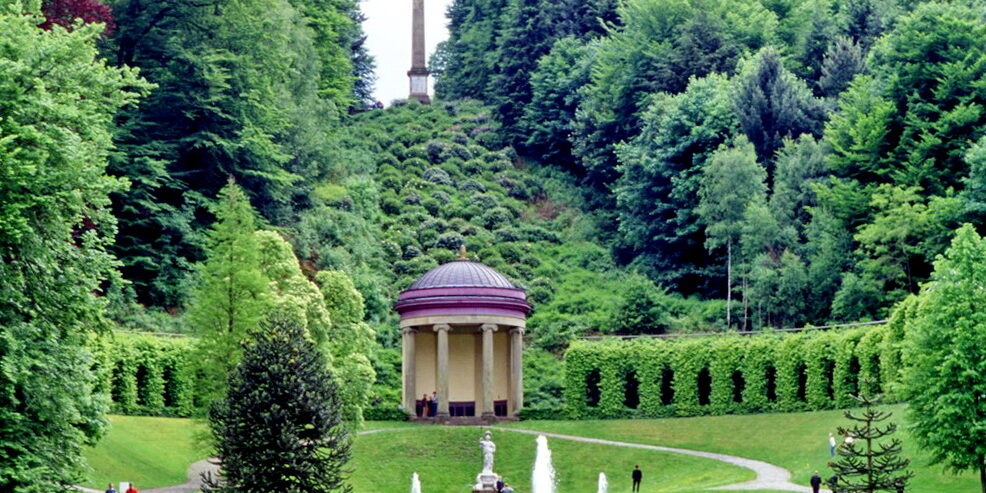 Prince Johann Moritz von Nassau-Siegen (1604-1679) transformed the area around the town of Kleve into a Baroque park landscape which was virtually unparalleled in the 17th century. His plans greatly influenced garden design throughout Europe and became a model for the park at Sanssouci in Potsdam, to give just one example.

Today the town of Kleve is still surrounded by avenues, parks and gardens. In the northwest, the Neuer Tiergarten (New Wildlife Park) is well preserved along with its amphitheatre and long Prinzenkanal (Prince Canal). The amphitheatre is dominated by a statue of the goddess Minerva. Standing above the amphitheatre, it is still possible to get a clear view of the structural pattern of the lines of sight. These lines meet at the Sternberg and Kleverberg in a star shape. From here, there are further views towards the Schwanenburg (Schwanen Castle) in Kleve and to Schloss Moyland (Moyland Castle). The system of lines of sight and linear vistas was included in the park at the time and given an extremely varied topography due to the integration of Kleverberg hill.

Prinz-Moritz-Kanal continues the main axis of the amphitheatre, drawing the eye across the Rhine plain to the Eltenberg where the romantic Stiftskirche (collegiate church) in Hochelten forms a further “point de vue”. The Prince-Moritz-Kanal ends at Tiergartenstrasse with two square islands surrounded by moats.

The Brandenburg governor of the duchy of Kleve, Johann Moritz von Nassau-Siegen (1604-1679) transformed Kleve, his residence town, and the Kleve area into a park landscape which was virtually unparalleled in the 17th century.

Today, the town of Kleve is still surrounded by a structured pattern of avenues, parks and gardens. The Neuer Tiergarten (New Wildlife Park) in the northwest part of the town is well preserved along with is amphitheatre and the 1,600-metre Prinzenkanal (Prince Canal).

Johann Moritz’ homogenous planning provided the framework for the main features of the Alter Tiergarten (Old Wildlife Park), which included a stretch of hills to the west and south of the Old Rhine as well as the low-lying land on its right bank. Two large parks – the Alter Tiergarten and the Neuer Tiergarten – were laid out in accordance with Moritz’ plans. Both parks featured avenues and long lines of sight as parallel axes and in the form of stars.

A dense network of paths was constructed in the direct vicinity of Kleve town. Twelve avenues radiate from the Sternberg, an artificial hill in the Neuer Tiergarten. These avenues are part of a large-scale plan which took in distant places and historical buildings as “points de vue”, among them the Eltenberg, St. Adelgundis in Emmerich, Schloss Moyland (Moyland Castle), the Kranenburg (a place of pilgrimage), Nijmegen and Arnhem. Johann Moritz had a pleasure garden designed directly at the Prinzenhof (Prince’s Court) in the town of Kleve itself. The artistic highlights of the Neuer Tiergarten were the amphitheatre on the slope of the Springenberg and the Prinz-Moritz-Kanal.

The hollow formed by a former quarry with natural, ferrous mineral springs provided a natural setting for the construction of the Neuer Tiergarten – a terraced garden like an ancient theatre, including water features.

Prinz-Moritz-Kanal continues the main axis of the amphitheatre, drawing the eye across the Rhine plain to the Elternberg where the Romanesque Stiftskirche (collegiate church) in Hochelten forms a further “point de vue”. In the original plans, the canal was to link the amphitheatre with the old river bed of the Rhine, but only a stretch of about 600 metres was realised in 1660. It was, however, sufficient to create a convincing optical link between the artistic “amphitheatre park” and the Rhine plain and Eltenberg.

The most important features of the amphitheatre are the terraced ponds, a monopteros and a statue of the goddess Minerva. Prinz-Moritz-Kanal ends at Tiergartenstrasse with two islands surrounded by moats.

Above the amphitheatre, the structured pattern of lines of sight which was once cut into the woods is partly overgrown but is still clearly visible. These lines of sight meet in a star shape at the Sternberg and the Kleverberg. From here, there are further views towards the Schwanenburg (Schwanen castle) in Kleve and, on clear sunny days, as far the Schloss Moyland (Moyland Castle) complex on the Lower Rhine. The system of lines of sight in the woods to the south of Tiergartenstrasse is carried on to the north on the plain in the form of a further geometrical pattern of avenues. This arrangement of axial vistas was enhanced by the integration of a natural feature into the planning, Kleverberg hill, resulting in extremely varied topography in the parks.

The governor of the period could enjoy the view over the broad stretch of the Lower Rhine landscape and over Prinz-Moritz-Kanal from his seat high up in the amphitheatre. The parks, however, were open to everybody and are thus regarded as the first public green spaces in Germany.

The extremely varied parks were partly changed over the following centuries and some of them were destroyed during the Second World War. Earlier, the parks had suffered extensive damage during the Napoleonic Wars. However, they remain well-preserved and the Kleve region is still dominated by them today, above all by their multiple system of axes. The parks constitute an independent, self-contained work of landscape architecture in Germany.

In 1821, during the Prussian period, far-reaching changes were made to the parks. Maximilian Friedrich Weyhe, the eminent Rhineland architect from Düsseldorf, put forward a plan at this time to recreate the parks in the style of an English landscape garden. Rather than the earlier strict axial structure, Weyhe favoured an asymmetrical landscape design with softer contours as well as a corresponding change to the shape of the ponds. However, the most important elements of the Baroque concept were retained.

The most recent measures for preserving and reconstructing the parks mostly retain the original structures while also taking account of the 19th-century elements of design. Above the two lower basins, the ponds have been restored to their original shape and the early cascades, supports and natural-rock walls have been reconstructed. The two islands in the quadrangular pond at the beginning of Prinz-Moritz-Kanal have been redesigned with simplified parterres à pelouse separated by box hedges. The whole area covered by the parks constitutes an essential part of Kleve’s extensive historical parkland. 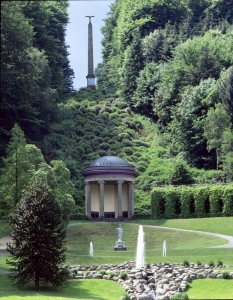 Prices:
There is no admission fee.

Accessibility:
The main paths are suitable for visitors with limited mobility